A Gathering of Troublemakers 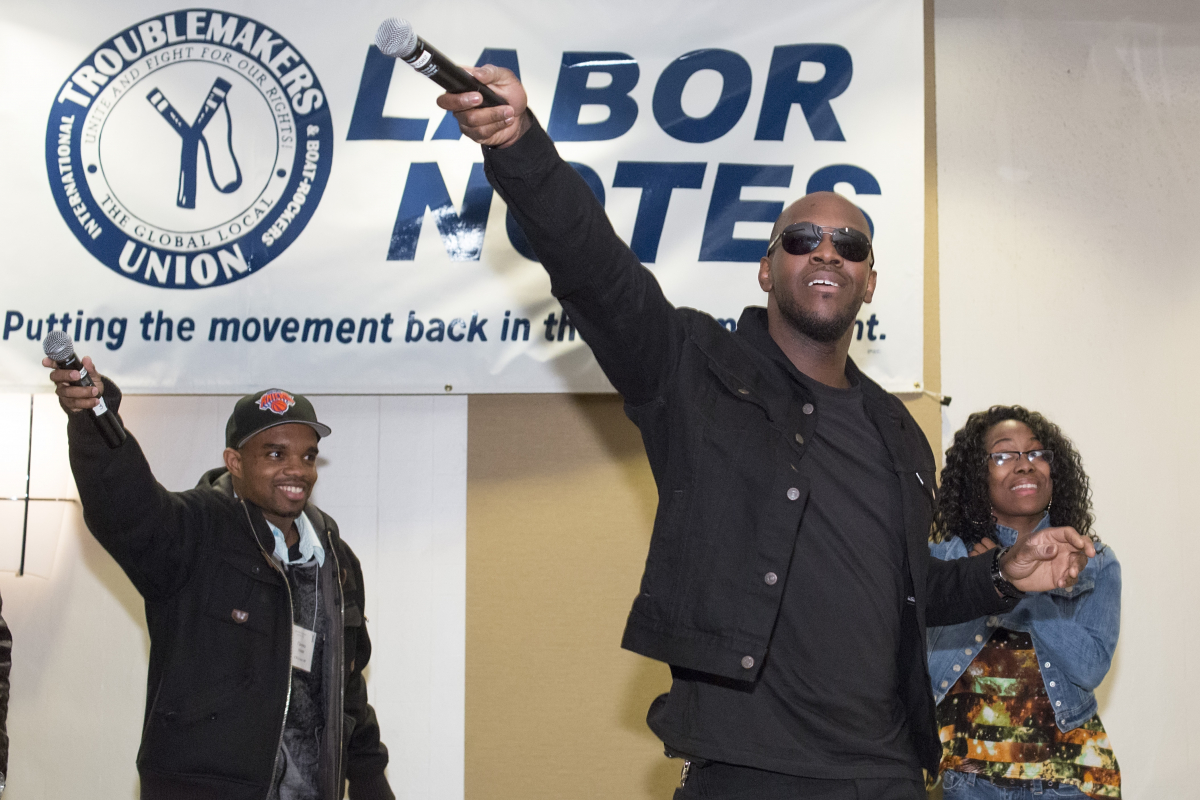 “I didn’t know going on strike would feel so liberating,” 25-year-old McDonald’s worker Jessica Davis, a member of the Workers Organizing Committee of Chicago, declared in Friday night’s opening session. “I can’t wait for the next strike!”

The crowd roared its approval. This ballroom was packed with troublemakers, all right.

Stephen Chan had led a 40-day strike on the Hong Kong docks. “It was very difficult to make a decision about striking,” he said, “harder than asking my wife to marry me. That was one person. Striking was about asking 200 people!”

True, and a sign of the times. “We didn’t think, in 1981, about needing translation at the [first] Labor Notes Conference,” mused editor Jane Slaughter, reflecting on the good and bad ways the labor movement has gotten “a whole lot less boring” over the organization’s first 35 years.

But globalization has created an unexpected perk, she said: an influx of activists from Latin America who’ve brought a different energy. “It took a while, but the labor movement finally got its head on straight, and now we feel privileged to welcome our newest brothers and sisters.”

Well over 2,000 people packed the Chicago hotel to the gills April 4-6—our largest conference, by far. “The good vibes are overwhelming,” said Marva Wade, who came with a big group from the New York State Nurses.

“I just had to go up and shake Karen Lewis’s hand: she’s one of my ‘sheroes,’” said preschool teacher Lauren Tozzi, after the Chicago Teachers Union president welcomed the crowd.

Hundreds of conference-goers piled onto school buses Saturday for a lunchtime protest at a nearby Staples store. The Postal Workers (APWU) are battling a privatization scheme that’s outsourcing postal work to the lowball retailer with one hand, and slashing traditional public postal services with the other.

“Since people trust the post office, frontal privatization is not such an easy thing,” APWU President Mark Dimondstein said. “First, you have to degrade it, undermine it—not having enough people working the windows, having the lines long, have parking where you can’t deal with it, close early, deliver mail late into the night—and people are going to be forced to look elsewhere.

“I compare it to what has happened to a lot of public education in this country.”

Educators turned out in force this year, reflecting the growing activism among teachers—both reform caucuses and strike votes are on the rise. Teachers from dozens of locals worked to tighten and expand their network.

“Our students’ parents are our sisters and brothers, too. We are responsible to wage their fights outside of our own drive,” Chicago Teachers Union activist Kimberly Bowsky said. “The same boot on your back is part of a matching pair, the other one of which is on my neck.”

The Portland Student Union received a Troublemaker Award for mobilizing in solidarity with their teachers. The contract campaign became a joint fight for smaller classes and better schools. At the conference, the Portland students quickly connected up with fellow high school students from Newark.

The hotel’s night-shift shuttle driver, a Teamster, caught the spirit—he chased down a Labor Notes staffer to buy a subscription to the magazine.

A giant crew came from the Amalgamated Transit Union, which coordinated a national training with the conference, bringing 450 bus drivers and other transit workers.

Lots of locals sent big delegations: 23 Ford workers from Chicago; 22 Verizon workers from New York; 18 public sector workers from SEIU in the Bay Area; 14 each from the Massachusetts Nurses and Vermont state employees; and many more.

Electrical Workers (IBEW) Local 48 decided to send 17 all the way from Portland, Oregon, because the awareness of unions and issues outside the building trades would promote solidarity, said Wayne Chow, a member of the local’s volunteer organizing committee.

And Communications Workers 1037 in New Jersey received 80 applications for its 25 spots—but reserved four of them for community activists and students.

A packed workshop launched
a new national committee—a mix of union members, other workers, and union staffers—that aims to elevate the voices of young workers. The group is batting around such ideas as spoken-word nights, media trainings, a podcast, and a video-blog site.

Postal workers from Canada, France, and the U.S. compared their anti-privatization fights. The French unions held a national referendum on privatization, drawing 2.5 million responses. The Canadians are doing a postcard campaign; a Detroiter volunteered to gather signed postcards from the U.S. and carry them over the border, where they don’t require a stamp.

International guests came from 22 countries and six continents. Before leaving Chicago, the international crew took a bus tour of local labor history—paying their respects by laying flowers at the Haymarket Martyrs’ Monument.

Just one training we forgot to schedule: “Hey @labornotes,” tweeted Josh Blanchfield as the weekend wrapped up, “we need a guerrilla workshop on repacking our luggage with all the great books, pamphlets, notes, and resources from #LN2014.” Remind us in 2016…

The other awards went to Shannon Ryker, founder of the Rosie’s Machinists 751 caucus at Boeing; the Korean Rail Workers Union, which struck against privatization; and the Brooklyn Cablevision workers, who are fighting for a first contract with Communications Workers 1109.

The Cablevision workers also rocked the house with their performance as a rap group. Conference-goers savored the sweet harmonies of the Seattle Labor Chorus, danced to the rhythms of Chicago band Quinto Imperio and DJ Mwelwa Musambacine, reflected on exhibits of New Deal art and contemporary photos of immigrant workers—and raised their own voices in karaoke and round-robin song sessions, plus workshops on button-making, song-adapting, and creative organizing.

Although “the situation is depressing in so many ways,” remarked Brandon Rippey of the NEW Caucus in the Newark Teachers Union, “I come to a place like this and I’m inspired.”

All weekend people walked the walk, not just talked the talk, of solidarity. Volunteers staffed the registration table, ferried flipcharts to workshops, set up projectors, and sold the popular new black Troublemakers hoodie from morning till night.

Impromptu volunteers popped up whenever something needed doing, from moving around chairs to solving an accessibility problem. One person who’d just arrived, suitcase still in hand, stepped right out of the registration line when he heard a presenter needed help unloading supplies.

This can-do spirit carried into the sessions too, of course. In a meeting on strategies to boost staffing in hospitals, when Massachusetts nurses described their plans for a safe-staffing ballot initiative, New York nurses promptly volunteered to travel north to help.

Some meetings were invented on the spot, in rooms set aside for DIY sessions. For instance, 30 worker center leaders swapped strategies and discussed how to work together to take on bigger fights. Another meet-up brought together members of independent public sector unions.

Thirty Asian and Asian-American attendees met. Not long after, putting their new network to work, they got a call to support 48,000 Chinese workers on strike at plants that make Adidas and Nike.

‘NOT ONE STEP BACK’

In Sunday’s closing session, participants heard from activists in two dynamic movements the labor movement has a lot to learn from.

Reyna Wences is a founder of Chicago’s Immigrant Youth Justice League—young immigrants who have been “coming out” about their undocumented status and chaining themselves to buses to protest Obama’s record rates of deportation.

Tears were in her eyes—and those of many audience members—as she declared, “I told myself I would come out of the shadows every day if I had to, because I was a human being and I had a right to be happy.”

And Ajamu Dillahunt, longtime activist in Black Workers for Justice and the APWU, was among the thousand North Carolinians who got themselves arrested last year for human rights.

Dillahunt said one consequence of the Moral Mondays movement they weren’t expecting was white people founding chapters of the NAACP in western North Carolina. “The movement’s slogan is ‘Forward Together, Not One Step Back!’” he said.

A Sampling of Sessions

The high stakes of public budget cuts were thrown into sharp relief just two weeks before the conference—and three miles from the conference hotel—when a train, whose operator was overtired from long hours, jumped the tracks at O’Hare Airport, injuring 32 people.

Fellow ATU members shared their own harrowing safety stories in a workshop called Do No Harm, and heard how teachers and nurses are resisting unsafe conditions.

In Costing a Contract, “I was shown how to factor in the real numbers on what an individual makes and what the real cost of a raise should be,” said Ironworkers Local 44 business agent David Baker.

“Too many times the tradesman’s raise is based off the thought that he makes 2,080 hours a year, but the truth is we are lucky if we get 1,500.” Not long after the conference, he reported, “I have begun to use the worksheets already!”

A panel on Labor and Independent Politics featured movers and shakers from Seattle; Richmond, California; Lynn, Massachusetts; and Chicago. Building a Reform Caucus drew lessons from Machinists, Teamsters, and teachers.

Panelists in Striking without a Union described job actions in fast food, warehouses, railroads, and retail janitorial. And the session on Immigration Reform: Where Do We Go from Here? provoked discussion of strategies for ending deportations—and a lively debate over the merits of fighting for citizenship.

“I attended a great class on using our own internet radio to reach our members and the public,” said Shelley Martin of the Vermont State Employees Association. “It’s so hard getting our story in the press; I learned how we can build our own media.”

Some workshops taught organizing skills; others analyzed the bosses’ schemes. “The employers have their own fight for $15,” quipped Peter Knowlton of UE’s Northeast Region, in a meeting of manufacturing workers—“but it’s from $30-an-hour jobs down to $15, instead of up to $15 from $8 or $9.”

Don’t “Lean” on Us: Management’s Big Squeeze compared production methods in various industries: UPS package delivery, auto factories, schools, hospitals. Chicago nurse Talisa Hardin described how her hospital is using “just-in-time staffing,” a variant on the manufacturing method—but in this case the materials arriving “just in time” are the workers.

A panel called Labor Confronts Climate Change was standing-room-only, and featured the few unions taking brave stands on the issue—including Canada’s Unifor, which has members in the tar sands; National Nurses United, whose members are coping with the ecological crisis’s fallout in disasters like Typhoon Haiyan; and the Amalgamated Transit Union, whose jobs are part of the solution.

Participants stressed that it’s up to organized working people to save the planet—our employers certainly aren’t going to do it, since they always put short-term profit over even their own long-term survival.

In Health Care Justice, State by State, Johanna Ryan of the Illinois Single-Payer Coalition reported on “the level of urgency among the rank and file… People know there’s a crisis and that the Affordable Care Act isn’t going to solve this and may make some things worse.”

A conference highlight for Phoebe Rounds, an SEIU 1199NW organizer, was hearing firsthand from Tennessee workers: What Happened at VW? Even though their union vote went down to defeat, “I was inspired to see how the organizing campaign transformed the women who spoke,” she said.

And the rooms were full to bursting for Stop the TPP! and Can Labor Change the World? An Intergenerational Exchange, where six panelists from three generations reflected on their experiences.

Baby boomer Gene Bruskin, a veteran of the 16-year Smithfield pork plant drive in North Carolina, remarked, “One thing noticeably absent at Labor Notes, that is so present at much official labor stuff, was cynicism.”

A version of this article appeared in Labor Notes #422, May 2014. Don't miss an issue, subscribe today.

Were any of the sessions videoed? Any accessible online to people overseas?

Yep! Some videos are here and some others are here.