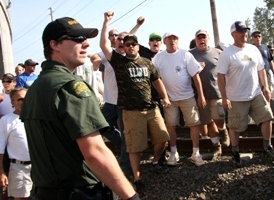 Conflict is looming over a grain exporter's attempt to use scab labor to load a freighter in Longview, Washington. Occupiers and Longshore unionists—who blocked a train in September—expect a heavily armed police presence, but their own friction is adding difficulties. Photo: Dawn Des Brisay.

Waiting somewhere in the Columbia River is a freighter. The transnational grain exporter EGT wants to use scab labor to load it at the small Washington state port of Longview and send it to Asia.

It won’t be easy. Hundreds of Occupiers and Longshore union (ILWU) members in the Northwest have vowed to protest when the freighter attempts to dock and load. ILWU members have stood together in Longview since June, halting trains, dumping the grain they carry, and invading the port terminal to stop scab work.

Their campaign of nonviolent resistance has been met with escalating police action and 130 arrests, some so aggressive they have sent ILWU allies to the hospital.

The stakes are higher this time. A Coast Guard escort will join the grain ship as it attempts to dock. Dan Coffman, president of ILWU Local 21 in Longview, expects vessels with mounted .50 caliber machine guns, armed Coast Guardsmen on the grain ship, and a big law enforcement presence bristling with weaponry.

Although only 50 jobs are immediately at stake in Longview, if EGT wins this fight the door is kicked open for other union-busters—and the ILWU could lose the grain work that accounts for 20 percent of the financing of its pension and welfare funds.

Coffman says the union is also at risk under the PATRIOT Act and more recently the National Defense Authorization Act, saying protesters may be labeled “terrorists.”

He added that members’ Transportation Worker Identification Credential, a federally mandated security document for port personnel, could be revoked under Coast Guard regulations. Fines and federal injunctions have already cost the union more than $300,000 for its disruptions.

Still, in a January 3 letter to all locals titled “Prepare to take action when EGT vessel arrives,” ILWU President Bob McEllrath blasted out a call for mass member action in Longview. Union members know the risks.

“Me and my fellow longshoremen have been here before,” said a Seattle member who participated in last summer’s dump of grain on the Longview railroad tracks, when 800 members mobilized. “We’re ready to go when the call goes out.”

Blocking the ship is “something that we’re going to have to consider,” Coffman said. “It’s kind of uncharted waters.”

EGT is responding with ruses and false starts. A vessel headed for Longview January 11 was diverted to Portland at the last minute. The union maintains a 24-hour picket line.

Continuing difficulties between some ILWU locals, members, and Occupy participants are also muddying the waters.

“We keep stressing to everybody we talk to it’s nonviolent disobedience,” Coffman said. “If you’re going to plan on tearing stuff up, stay home.”

Occupy and the ILWU have vastly different organizational and cultural orientations, making it understandable why their relationship has had growing pains.

The strain grew around Occupy’s call for a shutdown of West Coast ports December 12 as a protest against the 1%. The ILWU questioned why Occupy failed to consult with the union, when its members would be most affected.

Occupy members interpreted the union’s distancing itself from the action as, at best, a legal safeguard against the fines that could result from a work stoppage, which would violate the ILWU contract’s ban on strikes. At worst, they thought it demonstrated the union movement’s timidity.

When Occupiers blocked port work in Oakland, Seattle, and Portland, they declared solidarity with ILWU members in Longview as one of their goals.

Now both groups are mobilizing to protest when the ship tries to dock, but ILWU officials are wary of Occupy’s support, fearing unsanctioned actions in Longview and even attempts to block ports again in other West Coast cities. Occupy has not called for such actions directly, though Occupy Oakland asked that those who “cannot physically join the community blockade in Longview, Washington, mobilize in solidarity through direct action in their communities.”

McEllrath told locals to make sure enough members remain behind to work the ports, while mobilizing the rest to get to Longview. He raised the specter of an injunction, citing “the Taft-Hartley Act that criminalizes worker solidarity,” and warned that the union must “cut a narrow path,” presumably to avoid being charged with violating that law’s ban on sympathy strikes.

The tension between the ILWU and Occupy was on display in all its ugly honesty in Seattle January 6. Occupy Seattle, Portland, and Oakland had planned a panel discussion to promote the Longview convergence, featuring several members of ILWU.

Retiree Jack Heyman from Oakland noted that the union had not asked members to endorse the December port shutdown but argued that members “voted with their feet” by refusing to work.

A group of Seattle ILWU members and officers interrupted Heyman, questioning what authority he had at the gathering. A heated exchange including some pushing and shoving ensued. Six days later, members of Seattle’s Local 19 passed a resolution that pledged members to withhold support for Occupy and demanded an apology.

“The ‘Occupy’ movement has tried to substitute themselves for the membership in our struggle with EGT, and has attempted to subvert the ILWU,” the local concluded.

In his call to action, McEllrath had advised members to “take extreme caution when dealing with supporters of non-ILWU sanctioned calls to action relative to EGT.”

While some Occupy participants claim the union is divided between members and headquarters bureaucrats, Coffman said Local 21 is looking to the international for a lead.

“The international is in control and will be directing,” he said. “That’s why we elect those positions.”

Coffman said the union is contacting unionists who have sent letters of solidarity and attended rallies throughout the months of protest. The Cowlitz County, Washington state, and San Francisco labor councils are all helping to spread the word.

Cowlitz’s Central Labor Council, which covers the Longview area, invited “all friends of labor and the ‘99%’ everywhere to come to the aid of ILWU Local 21.”

Paul Nipper, an organizer with Occupy Longview, said the tension is overblown.

“ILWU does support us,” he said. “However, publicly speaking on our behalf, and being involved with the planning, is not in their best interest. What good are we doing for them if we cost them more money in court?”

He advised that Occupiers focus on the real problem—EGT.

“This transnational giant EGT came into our town, lied to the residents, bought political influence, took away jobs from our community, and uses our port as a way to extract wealth from this town,” Nipper said. “What does Occupy stand for if it doesn’t stand up to EGT?”

Occupiers in Oakland are busy making preparations for the convergence in Longview, 13 hours north. At a recent Occupy labor solidarity meeting, planners gave reports on housing, legal support, and caravan preparations. To date more than 100 community supporters have signed up to head to Longview.

“We’re out there doing the hard and tedious work of recruiting people,” said Moises Montoya of Oakland’s labor solidarity committee.

“This struggle has reinvigorated old-timers like myself,” he said. “I’m hopeful that as Occupy and labor learn more about each other we will mature and build a deeper, respectful strategic relationship for the long fight ahead.”

In Longview, logistics are coming together. Nipper said activists are using the inter-Occupy conference call system, email groups, phone trees, and social networking to do the planning.

They coordinated a nonviolent resistance training and are working with church allies to find enough beds in town. Planners want a lot of cushion. They’re anticipating big numbers.

Evan Rohar contributed to this article.

Nate Colbert is one of two major-league football gamers red sox tickets (Stan Musial is the other) to have hit five house operates in a doubleheader yankees tickets, a accomplishment he done as a Padre. padres tickets

Paul Bigman’s comment does not really clarify things as to what happened at the January 6th meeting that I also attended. A co-chair of the event was a Seattle area African American ILWU member. The first speaker was one of a dozen or so rank and file ILWU 21 members who came up for the meeting. He gave an inspirational account of their struggle. There were also ILWU activists from the Bay Area and Portland who talked about an ILWU history of being willing to defy the reactionary Taft-Hartley Act ban on sympathy strikes, and they argued that a coast wide port shutdown was the best tactic for stopping EGT’s union busting. This differs from the approach of ILWU national leaders, who are concerned about fines that could result from stopping work at non-EGT ports in violation of the federal law.

Differences over tactics are common in labor, and they are best resolved by democratic debate. But the mostly officers and staff from the ILWU locals that brother Bigman mentions used an entirely different method. They loudly disrupted the meeting in a clear attempt to intimidate and silence those they disagree with, and they refused to quiet down even after the chair told them they could read the letter from ILWU President McEllrath and have their say in the discussion period (which they did). They red-baited and yelled "where is the leadership?" on the panel, when they knew that Local 21 President Coffman had been instructed to stay away by the ILWU international.

It was appalling to watch a Latina activist from Occupy Seattle have to shout at the top of her lungs to deliver her speech about the connections between the ILWU struggle and those of farm workers. Such bullying by union leaders should be harshly criticized, not justified or glossed over. Can an attempt to bust up a labor/community solidarity meeting really be OK?

To clarify, at the January 6th meeting, it was not only members of ILWU Local 19 (the Seattle longshore Local) who demanded that someone representing the ILWU be allowed to speak, and that the letter from ILWU International President Bob McEllrath be read to those in the room. There were several dozen ILWU members involved, from Local 8 (Portland longshore), Local 4 (Vancouver WA longshore), Local 23 (Tacoma longshore), Local 52 (marine clerks in the Puget Sound) and the Inlandboatmen's Union of the Pacific (IBU, the marine division of the ILWU) involved as well. This included both elected officers from all of the locals as well as rank-and-file activists. The implication that elected officers of the ILWU, arguably the most democratic, rank-and-file Union in the nation, are "bureaucrats" who don't speak for their members is insulting and, frankly, anti-working class. There are really two separate kinds of issues here: what the best course is for longshore, and who should determine the answer to that question. The ILWU has a coast-wide contract covering all longshore work from Bellingham to San Diego; and a grain contract that covers grain terminals in Portland, Vancouver, Tacoma, Longview and Seattle. The issue is not a local one for Longview, but a struggle to maintain the standards for which the ILWU has fought since 1934. But it's certainly an issue for the workers affected to decide. The first principle of the ILWU includes: "given the truth and an opportunity to determine their own course of action, the rank and file in 99 cases out of 100 will take the right path in their own interests and in the interests of all the people."