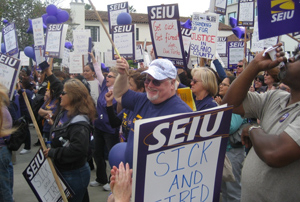 Reform forces from across Service Employees Local 1021 uniting under the banner of “Change 1021” swept out appointed leaders in the local’s first-ever elections. In results announced early Saturday, the reform slate took 26 of 28 positions, including the top seven spots.

Local 1021 is one of SEIU’s new megalocals, created from 10 locals. It represents 50,000 primarily public sector workers in California, from the San Francisco Bay to the Oregon border and down into the Central Valley. The local also includes newly unionized nonprofit workers whose agencies are funded by the public sector.

The winners released a statement pledging to work with other candidates and their supporters. "Working together we can fight layoffs, resist concessions and preserve important public and non-profit services for our communities," they said.

Megalocals like 1021 are the brainchild of SEIU President Andy Stern, who has centralized authority and resources in the union. The creation of new locals allows Stern to impose a virtual trusteeship, appointing all the officers and executive board. Typically, Stern appoints a protégé or loyal lieutenant to run a newly created local. At SEIU Local 1021, that was Damita Davis-Howard, a president of one of the 10 merged locals—who nominated Stern when he first ran for International president in 1996.

The appointee faces no election for three years and uses the power of the presidency, and patronage, to build a base and transition seamlessly into an elected leader. Stern has strengthened his control by using this model across the country.

Stern’s formula was dysfunctional in Local 1021 from the beginning, with many staff vacancies and no one overseeing contract issues for thousands of city and county workers. As cutbacks got worse, money was spent on trinkets and poorly attended ice cream socials.

But Local 1021 really ran aground on the recession. Stern had justified his centralizing agenda on the claim that “bigger = stronger.” The recession and its devastating impact on public sector budgets put Local 1021’s appointed leaders to the test, and members now feel that bigger seems to mean more bureaucratic. In the face of budget deficits and aggressive employers, Local 1021 proved disorganized as leaders conceded to almost any demands by employers for concessions.

Members are reeling from successive waves of layoffs, furlough days, and cuts in pay and benefits. Two San Francisco public hospitals laid off nursing assistants and clerks and rehired them at lower pay—and the union didn’t challenge this 20 percent pay cut for mostly women of color until rank-and-file members and community organizations put up a fight.

A local internal council of public workers was abandoned, so rank-and-file workers have met informally to share information about concession demands. Plans they came up with were either vetoed by staff or not resourced.

Years into the recession, the local lacks a plan. It lurches from crisis to crisis, constantly months behind.

These failings led to the emergence of a broad reform slate, including classified school employees, municipal workers, nurses, transit workers, and nonprofit employees. Reformers united around an agenda of “Change 1021 to Member-Run,” with Roxanne Sanchez, who works at the Tenderloin Housing Clinic in San Francisco, running for president. She won by a 2 to 1 result.

Reform forces began to coalesce during a long fight between 2006 and 2008 over the new local’s bylaws. Reformers fought for a strong and representative executive board while appointed officers maneuvered for a strong-president form of governance.

The most contentious issue was the role of staff, in a union with a history of being staff-run. Rank-and-file leaders proposed that staff could not run for president and other high offices. This would have eliminated Davis-Howard as a candidate, set a “bad example” for other SEIU locals, and upset Stern’s master plan.

Rank-and-file members eventually won even the majority of Stern’s hand-picked executive board to adopt the position. Davis-Howard appealed to Stern, who, not surprisingly, ruled that staff could run for president.

After reformers threatened to run a “vote no” campaign, a compromise was crafted where the president would be a rank-and-file member but the local would have a Chief Elected Officer, a position for which staff could run. The CEO would control hiring, firing, and assignment of staff.

Sin Yee Poon, a rank-and-file leader from San Francisco’s Human Services Agency, says, “This ‘elected’ CEO position is a monstrosity that turns what is essentially an executive director position into an elected officer who does not report to the executive board.”

Reformers suspect the International saw the CEO position as a way to salvage Davis-Howard’s election prospects and keep the International’s hand in the local’s affairs. The message from Stern was clear: accept the compromise or face a trusteeship. The reformers decided to run Poon for CEO, and she took the position by a 2,141 to 1,445 tally over Davis-Howard.

But some reformers were fed up, after hundreds of hours of work on the bylaw changes. County and municipality workers in Marin County filed a decertification petition January 29 among the 1,500 members of the unit. They plan to create an independent union. Representation was poor; Local 1021 closed the local office in Marin. Other areas are murmuring about decertifying as well.

No date has been set for the Marin decertification election, however, and reformers worked to involve them in the campaign.

When the reform slate formed, the administration team cracked. Some incumbents felt Davis-Howard would be a liability, so they jettisoned her and formed a new slate. Neither of the two incumbent slates claimed the mantle of incumbency. Both repackaged themselves as something new and fresh.

Of course, winning is only the first step. Poon cautions, “We will have to deal with a huge task of rebuilding a union in a new direction.”

Sanchez agrees. “Even in better times this was difficult,” she said, “but with our local union in such disorder and our International union so estranged from its members, it will be a formidable challenge.”

A version of this article appeared in Labor Notes #372, March 2010. Don't miss an issue, subscribe today.
Related
Learning from the Covid Disruption: How Unions Can Emerge from the Pandemic More Effective »
In a Landslide Victory, Mexican GM Workers Vote In an Independent Union »
Teamsters United Takes the Wheel »
At a Convention Like No Other, Teamster Challengers Turn a Corner »
New Jersey Welfare Workers Sound the Alarm on Safety »

The movement to reform SEIU is in full sway. Nearly 1/3 of all SEIU members live in California and now the membership of the largest newly forcibly merged local has rejected the imposition of outside leadership and reclaimed their local for themselves. This is a bright moment in the steady march of reforming what is the labor movement's greatest potential for social change -- a reformed SEIU.

Just last year, reformers at SEIU Local 888 in Boston threw out Stern appointee and long-time hack Susana Segat. Just a month ago, Stern appointee Sharon Frances-Moore at forcibly merged SEIU Local 221 in San Diego resigned amidst a flurry of allegations regarding unlawful elections, incompetence, and complete disconnect from the membership.

Reform movements are strong in other SEIU Locals in California including 721 and 521 and the members of UHW are undertaking radical reform by joining with their ousted former leadership to create a vibrant new union, NUHW.

In New York there are rumblings at the mega building services local, 32BJ and even some rumblings within the giant healthcare mega local 1199.

All across the country, experienced SEIU organizing directors have left the union entirely or are left scratching their heads as SEIU has taken on one misadventure after another (NUHW and UNITE-HERE). These campaigns don't make sense to members, local e-boards, organizers, or seasoned leaders and the level of deep disaffection and alienation from the national union is growing daily.

Yet SEIU remains potentially a powerful force for good -- if and only if enough members rise up and demand democratic reforms and a return to solid unionism. Does anyone know of a website or list-serve where those committed to a better SEIU can discuss and plan a democratic revolution within our union? Its time to take our union back!