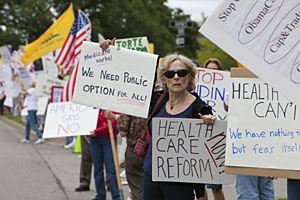 A Massachusetts local union president called it before the January 19 vote for senator: “I’ve never seen this much anger at the Democrats from union people,” said Jeff Crosby, president of a General Electric factory local near Boston, as he prepared a last-minute leaflet to hand out in the plant. “It’s worse than NAFTA.”

Top union leaders had bargained a compromise slowing down the health care benefits tax President Obama insisted on, but it was not enough to placate union members—and others—infuriated that Obama had broken his campaign promise not to tax benefits.

Crosby said his members were threatening to vote Republican to stop the tax, since 60 Democratic senators and no Republicans had voted for it. In Massachusetts’ special election they chose empty-suit Republican Scott Brown over a Democrat bound to cement the benefits tax in place.

In a Suffolk University poll conducted a week before the election, union-household voters in Massachusetts reported only 45 percent support for the Democratic candidate; union voters nationally backed Obama by 60 percent in 2008.

According to those on a January 14 conference call with AFL-CIO President Rich Trumka, Massachusetts state fed President Bobby Haynes exploded in anger, blaming top union leaders for a terrible health care bill and for losing the Massachusetts election—and thus the Dems’ 60th Senate seat, needed to ensure the health care bill’s passage (and the rest of labor’s agenda, labor law and immigration reform).

Obama took a hands-off approach to the content of the bill as it crept through Congress. He didn’t insist on a public option nor a strong employer mandate to provide insurance. It was hard not to notice that the only issue on which he took a hard stand was taxing benefits.

At his meeting with a dozen labor leaders at the White House January 11, Obama was firm that a tax on benefits was a must-have—despite his campaign promise to the contrary. “We have a lot of video clips,” said Machinists President Thomas Buffenbarger.

Although the benefits tax was not the only issue on Massachusetts voters’ minds (the faltering economy was the No. 1 concern in the Suffolk poll), it was one of the clearest examples of the Obama administration’s tilt away from working class voters, beginning with the bank bailout.

Trumka too had predicted that the health care mess would backfire on Democrats. In a January 11 speech at the National Press Club, he said, “In 1992, workers voted for Democrats who promised action on jobs, who talked about reining in corporate greed, and who promised health care reform. Instead, we got NAFTA, an emboldened Wall Street—and not much more. [In 1994] there was no way to persuade enough working Americans to go to the polls when they couldn't tell the difference between the two parties.”

NAFTA, which dealt a heavy blow to U.S. manufacturing, was voted up by Congress in 1993 after intense cajoling by President Clinton, garnering the votes of 102 House Democrats. Clinton lost the Democratic majority in Congress the next year—and never got it back.

As the likely House-Senate compromise took shape in early January, it appeared certain that if the bill passed, people with good (or just expensive) benefits would face a steep 40 percent tax likely to push them into inferior plans.

So labor leaders reached a deal with White House negotiators January 14 that accepted the tax they’d previously declared unacceptable. The deal announced by Trumka and his counterparts at Change to Win and the National Education Association would have exempted those in union-negotiated plans and state and local employees from the tax until 2018.

It also would have raised the threshold at which the tax kicked in for many other plans: those containing significant numbers of women, older workers, or retirees age 55 and up, or those in high-cost states, the latter affecting more than 38 million workers. Those provisions would have delayed those groups’ hit as well.

Trumka’s goal was to exempt as many people as possible, union and non-union, from ever paying the tax, though only the velocity of health care cost inflation would have proved how successful he was.

“Most of the 31 million insured employees who would be hit by the excise tax are not union members,” Trumka noted before the deal was struck. But in the end unions bought extra time for their members at the cost of making themselves look self-interested. The deal will create awkward moments for union health care activists who’ve spent years trying to build broad coalitions.

Not all top union leaders backed the compromise plan. Buffenbarger told Labor Notes his members at Boeing, Lockheed Martin, and General Dynamics were already over the $23,000 threshold at which the tax would originally kick in.

“No bill is better than this bill,” Buffenbarger said. “We don't care what the amount is that they peg it to: because of inflation, whatever number will be gobbled up pretty quickly.”

Firefighters President Harold Schaitberger said his union didn’t ask for the bill’s special, higher threshold for first responders, $26,000 rather than $23,000. The provision was worthless, he said, because most of his members are pooled in larger municipal plans, with no mechanism to segregate them out. “We’re not going to buy into a special deal for us,” Schaitberger said.

The Steelworkers’ Leo Gerard backed the compromise, telling Labor Notes he was thinking about Senator Jim DeMint, “that right-wing nut from one of the Carolinas,” who’s said he wants to make health care Obama’s Waterloo.

“We have to do everything to make sure we get a good bill so we can move forward with the rest of the president’s agenda as quickly as possible,” Gerard said.

Labor’s weakness throughout the health care reform process put a question mark over EFCA anyway, and even the question mark lay in tatters after the Massachusetts election.

Buffenbarger—who backed Hillary Clinton in the primaries—was a pessimist in any case. “We’re not going to get EFCA anyway,” he said. “It’s an election year. No way they’re going to touch it.”

TURN TO THE STATES

One bright spot could emerge from this winter’s health care debacle: union members not pushed into the arms of the tea-partiers could become convinced that “Medicare for All” is the only solution.

“It may mean more people are apt to be engaged on single payer because they’re getting hit themselves,” said Lenny Potash, a retired AFSCME member and co-chair of the Labor Taskforce for Universal Healthcare in Los Angeles.

The Vermont Workers Center turned out 350 people to legislative hearings January 12 to testify for the state’s single-payer bill. Senator Bernie Sanders was followed by union nurses.

The center, the state’s Jobs with Justice affiliate, began organizing in earnest last year: a rally of 1,000 at the State Capitol on a work day; organized committees in every county; a dozen regional hearings. The result, says co-chair Traven Leyshon, is that “we have changed what’s politically possible. As recently as September the legislature said they couldn't be bothered with single payer.”

All Democratic candidates for governor next fall say they support single payer (though Leyshon recalls former Governor Howard Dean, who “was always for single payer till the day he became governor”). The Democrats and the Progressive Party together have a veto-proof two-thirds majority in both houses.

A new single-payer bill, just introduced by a Progressive legislator, includes a just transition for insurance company workers and others who would lose their jobs under a single-payer system. The legislation was written so as to survive legal challenges.

SINGLE PAYER IN ONE STATE

California activists will back a single-payer bill starting this month, though Governor Arnold Schwarzenegger, who’s in his last year, is certain to veto it for the third time (similar bills passed in 2006 and 2008). The campaign kicked off January 11 with 1,000 members of the California Health Professional Student Alliance and others rallying in Sacramento.

Michael Lighty of the California Nurses Association explained that winning single payer is a multi-year project: heavy education this year, electing a Democratic governor who won’t veto single payer this fall, passing a new bill, taking the measure to the voters in a referendum. The media campaign alone could cost as much as $20 million.

What about the cost, in a state that’s broke? Cate Engel of the Labor Taskforce for Universal Healthcare said the bill ultimately would save California billions of dollars, by reducing administrative costs and using the state’s mammoth purchasing power to force drug and equipment prices down.

What about California unions that haven’t backed single payer—or ditched the idea before the fight even began, citing “political viability”? Well, said Lighty, “we saw what happened on the national level when they went for public option over single payer because of viability.”

Bill Bryce is the Jobs with Justice organizer in Detroit. He’s shaking his head over the lost opportunities of 2009—the year when Obama rode in on a wave of hope for change and corporations were in disgrace because of the financial fiasco.

“You’re the president, you appear on TV and say, ‘I have a suggestion, let’s tax Wall Street bonuses at 50 percent and defray the cost of health care,'” Bryce said. “If this was not the time to take on the insurance companies and the banks, just when will that time come?”

Related
Viewpoint: Two Contrasting Visions of the Labor Movement Were on Display in June »
We Can't Just Keep Saying 'Pass the PRO Act.' We Have to Organize. »
Richard Trumka, 1949-2021 »
Who Holds the Power in Joe Biden’s White House? »
Here's How to Join Labor's Anti-Coup Network »

In the Senate, by the way, there were five Dems who did vote for the GOP amendment to take the excise tax (in its Harry Reid, pre-Trumka/Cohen negotiations at the White House form) out of the Senate bill--Sherrod Brown was one who joined the 40 Republicans, Roland Burris from Illinois, and three centrists including Blanche Lincoln--even Sanders was MIA on this vote...