Viewpoint: Two Contrasting Visions of the Labor Movement Were on Display in June 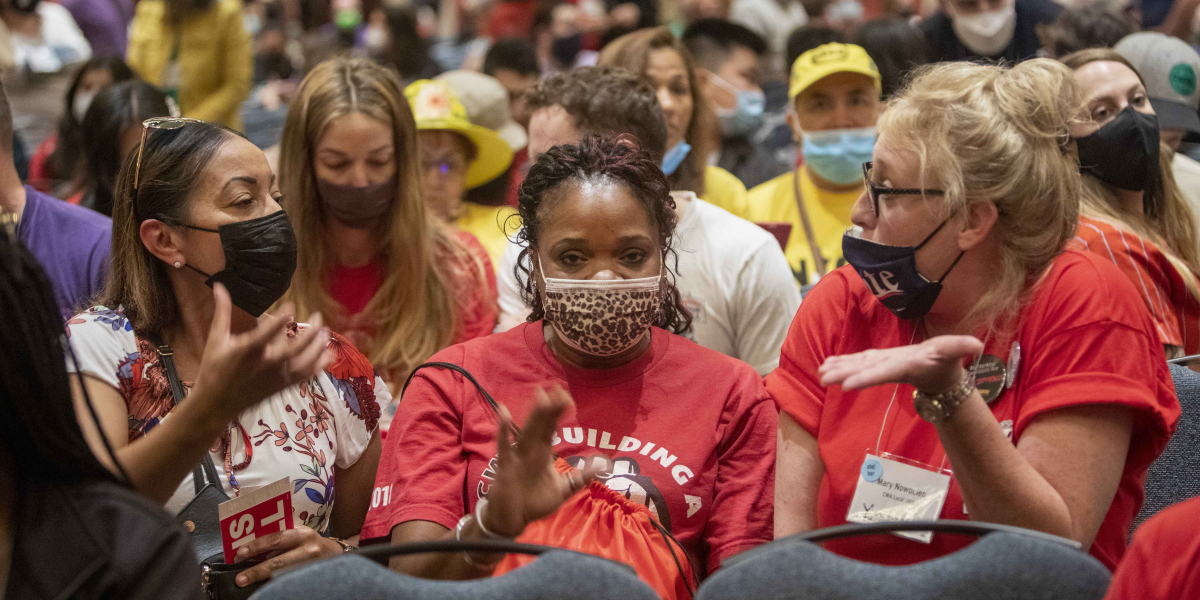 The crowd at Labor Notes is doing the work of building and transforming unions every day. They may come up short, but it won’t be because they set their goals too low or decided not to lead. Photo: Jim West

The rare planetary alignment in mid-June was accompanied by the equally rare alignment of the AFL-CIO convention and the Labor Notes conference. It’s not often there is the opportunity for such direct comparison of the top leadership and activist base of the labor movement.

The AFL-CIO met from June 12-15 in Philadelphia. The theme of the convention was “Organize and Rise.” Delegates elected a new leadership (Liz Shuler as president and Fred Redmond as secretary-treasurer), held discussions on a range of issues, and approved goals.

In her prepared remarks, President Shuler announced the establishment of a Center for Transformational Organizing, comparing this to how the AFL “invested to create the CIO for industrial organizing in the 1930s.”

“And here’s the bottom line,” she announced: “In the next 10 years, we will organize and grow our movement by more than one million working people. Together. All in. One, single, transformational goal.

“How’s that for a goal?” The delegates cheered.

Well, since you asked, that's a bad goal. It falls way short of what is needed. If the AFL-CIO meets this goal, it wouldn’t even keep up with the growth in the size of the workforce. It would fail to increase the percentage of workers represented by unions.

Transformational indeed. Shuler might as well have gotten up in front of the delegates and said, “We have a plan to stagnate!” But how many people would have cheered for that?

And did she really say that the AFL “invested to create the CIO for industrial organizing in the 1930s”?

The Committee for Industrial Organization was formed inside the AFL in 1935 by the leaders of a handful of unions (led by the Mineworkers’ John L. Lewis) to promote the strategy of organizing the workers in the mass production industries on an “industrial” rather than a “craft” basis.

They did this in the face of opposition from the AFL leadership. In fact, the leaders of most AFL unions resisted the idea of industrial organization so strongly that, in 1937, they expelled the unions that were in the Committee for Industrial Organization. Those unions then formed the Congress of Industrial Organizations and continued organizing workers in mass production industries.

Much of what Shuler and Redmond offered are warmed-over versions of policies proposed by John Sweeney when his New Voice slate won the leadership of the AFL-CIO in 1995. Clearly those policies did not succeed, and there should be a wide-ranging discussion as to why.

When a reporter from NPR asked what was different about this leadership’s commitment to organizing as compared to John Sweeney or Rich Trumka, Shuler replied that “in the past... the federation ran out in front, and the unions themselves were not following the plan, or... they weren’t all in sync with one another. That’s what’s going to change as we’re actually building consensus. We are building an integrated plan that everyone’s all in on.”

So the problem was the leadership led too much? And the solution is tailoring the goals to be acceptable to the most organizationally conservative national unions? That’s pretty much the opposite of what the unions that formed the CIO did.

But don’t worry. According to Shuler and the AFT’s Randi Weingarten, there are now measurable goals that each union will be expected to meet. OK then. And what will be the consequences of failing to meet the goal? For starters, how about letting us all know what each union’s goal is?

The AFL-CIO convention took place during a rise in union organizing and public support for unions. Although Shuler mentioned the organizing being done by workers at Starbucks and Amazon—the people who are doing transformational organizing—no representatives from the Amazon Labor Union or Starbucks Workers United spoke at the convention, most likely because they are doing it outside the framework of the AFL-CIO.

For three days, 4,000 union members, activists, stewards, local presidents—and even one or two national presidents fresh from the AFL-CIO convention—met, talked, argued, and learned together.

No officers were elected or resolutions adopted, but there was a lot of discussion about what it will take to transform the labor movement and organize millions of workers. That’s millions, not one million.

Starbucks and Amazon workers were at the center of many discussions. But so were Teamsters, auto workers, flight attendants, journalists, teachers, nurses, and many others.

While many of the workshops held at Labor Notes would have fit at the AFL-CIO convention, I’m willing to bet the AFL did not have one on “Class Struggle Unionism.” Nor did they have workshops on “Building a Caucus and Transforming Your Union” or “Democracy Is Power: Fighting for One Member, One Vote.” Labor Notes did.

If the AFL-CIO wants to hold the leaders of affiliated unions accountable for meeting organizing (or any other) goals, as rank-and-file Teamsters and auto workers are doing, promoting direct membership election of national officers would be a good place to start.

The main session on Friday evening, June 17, set the tone for the weekend. It combined elected officers who owe their positions to successful rank-and-file organization (Stacy Davis Gates of the Chicago Teachers Union and Sean O’Brien, general president of the Teamsters); ground-breaking organizers (Michelle Eisen of Starbucks Workers United and Chris Smalls of the Amazon Labor Union); activists from key recent strikes (Nolan Tabb a John Deere striker and member of the Unite All Workers for Democracy caucus in the UAW); and U.S. Senator Bernie Sanders.

Their presence together, and their remarks, highlighted the interplay of the fight for democracy in unions, organizing the unorganized, strikes and militant direct action, and unabashedly pro-working-class political activity.

A CONFERENCE OF ORGANIZERS

Conference-goers built upon that interplay as rank-and-file union members, stewards, and local officers shared their experiences in workshops and corridor conversations over the weekend. They made contact or reconnected with people in the same union or industry and strengthened networks to organize on a broader scale.

For example, Teamsters met with Amazon Labor Union members as well as members of Amazonians United and the Retail and Department Store Union (RWDSU)’s union campaign in Bessemer, Alabama, to discuss how to organize Amazon. Members in the building trades met to discuss how to support one another as they work to transform their unions.

Starbucks workers from across the country met and discussed next steps. Eisen expressed what drives these worker-organizers when she said that it was during a captive-audience meeting early in the Starbucks organizing campaign in Buffalo that she realized that, “Not actively working against my co-workers was not the same as standing with them.” That was the moment when she stepped up as an organizer.

Attendees discussed how to build successful strikes and the central importance of democracy for reviving unions. Or as Tabb put it, when asked how he was going to fight John Deere and the United Auto Workers at once: “I’m fighting John Deere, but I am the UAW.”

They discussed organizing and bargaining. They learned about workers’ struggles in Mexico, China, and other countries. And they learned a few new songs. Translators were available for many sessions; several workshops were held in Spanish, and there was even one organizing training in French.

Two wings of the labor movement were on display in mid-June. Both wings have members, officers, and staffers who want to see unions grow in numbers and strength. But the leaders of the AFL-CIO showed they do not have a viable way forward to offer. The Labor Notes conference showed what a revitalizing labor movement looks like.

The crowd at Labor Notes is doing the work of building and transforming unions every day. They may come up short, but it won’t be because they set their goals too low or decided not to lead.

Steve Downs is a retired NYC subway train operator and former officer of Transport Workers Union Local 100. Viewpoints reflect the opinion of the authors and do not necessarily reflect the views or opinions of Labor Notes. We welcome responses at editors[at]labornotes[dot]org.