The grassroots effort to Block the Boat which successfully prevented an Israeli ZIM Lines ship from docking anywhere on the West Coast in May and June. This photo was taken in the port at Elizabeth, New Jersey, at a protest in July. Photo: Block the Boat NY/NJ.

In May, Palestinian workers urgently appealed for international solidarity against a sharp escalation of Israeli violence. Their appeals have been met with an unprecedented response—even in the United States, where labor officialdom has long supported the world’s last remaining apartheid regime (see sidebar).

This dramatic shift is reflected in statements issued by U.S. labor bodies, and, above all, Block The Boat, which successfully prevented an Israeli ZIM Lines ship from docking anywhere on the West Coast in May and June.

More deeply, it echoes a longer history of U.S. working class resistance to Zionism—the settler-colonial ideology that underlies the Israeli regime—as well as solidarity from BIPOC (Black, Indigenous, People of Color) and other grassroots social justice movements in the United States.

Leading up the May attacks, Jewish settlers evicted Palestinians en masse in the Sheikh Jarrah and Silwan neighborhoods of Jerusalem. Israeli forces then stormed the Al-Aqsa Mosque and sponsored violence throughout the West Bank and within the “Green Line”—the territories of Palestine that the Israel regime first occupied in 1948 (see here). And it bombarded Gaza, killing and wounding hundreds of people, many of them children.

These events continue more than a century of violence against the Palestinian people.

During the 1948
Nakba (Catastrophe), Zionist militias massacred thousands of Palestinians, destroyed more than 500 Palestinian villages, and expelled 750,000 people (or 85 percent of the Palestinian population) from 78 percent of their country. Millions of these refugees and their descendants still live in camps or otherwise remain in exile from their homeland. 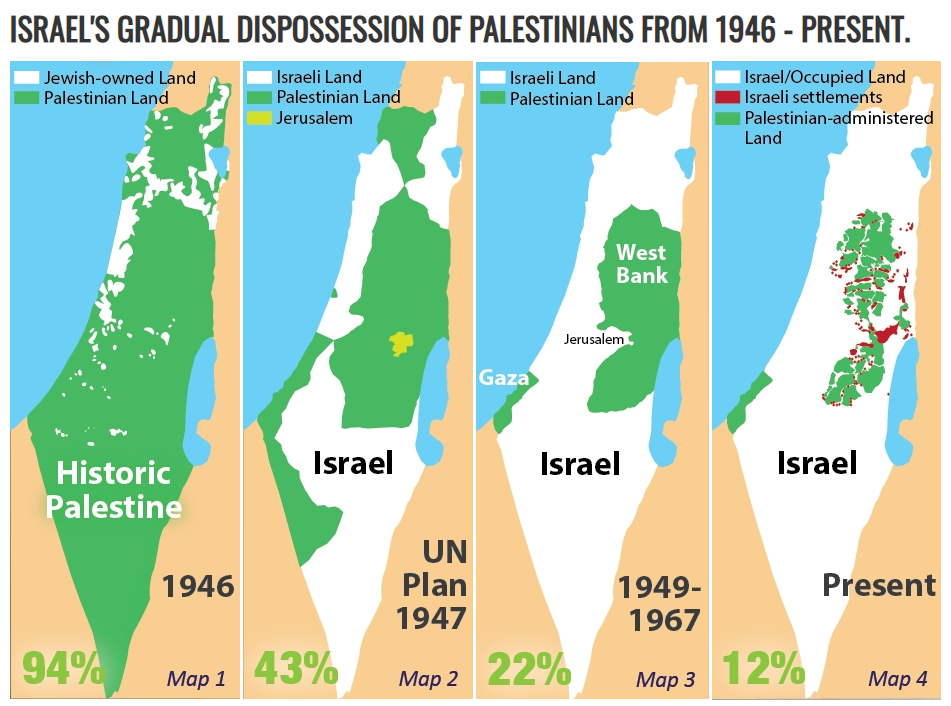 The Nakba is not one event, but an ongoing campaign against the indigenous people of Palestine. In 1967, Israel seized the remaining 22 percent of Palestine—including East Jerusalem, the West Bank, and Gaza. Under the banner of “Judaization," the relentless ethnic cleansing continues today in both 1948 and 1967 occupied Palestinian lands.

As a result, millions of Palestinians live under a military occupation, while armed settlers from Europe and the U.S. continue to expand illegal settlements. Israel has built an apartheid wall in the West Bank and expanded other apartheid policies that legalize racist discrimination against all Palestinians, including those with Israeli citizenship. Israeli siege, massacres, and economic blockade have rendered Gaza—often referred to as an open-air prison—nearly uninhabitable.

Human Rights Watch and the Israeli human rights organization B’Tselem have recently acknowledged this apartheid reality, not just in the 1967 occupied territories, but throughout historic Palestine. The International Criminal Court, after years of delay, announced it will open an investigation into Israeli war crimes and crimes against humanity.

Since all of Israel is occupied Palestine, Palestinians demand decolonization and equal rights for all its inhabitants, “from the river to the sea.”

The Boycott, Divestment and Sanctions (BDS) movement, which has been endorsed by nearly the entire range of Palestinian society—including its trade unions—is inspired by the worldwide divestment campaign that helped topple apartheid South Africa, and builds on decades of Palestinian resistance to Israeli colonization.

It demands an end to Israeli occupation and colonization of all Arab lands, dismantling of the apartheid wall in the West Bank, full equality for Palestinian citizens of Israel, and implementation of the right of Palestinian refugees to return to their homes.

On May 13, in response to the latest Israeli offensive, two Palestinian union federations urgently appealed for solidarity, “calling on our brothers and sisters in the trade union movement internationally to stop handling goods imported from or exported to Israel.”

On May 18, Palestinian unions helped organize a general strike observed by hundreds of thousands throughout historic Palestine (see here and here). This act of mass resistance echoed the 1936 Palestinian general strike against Zionism and British colonialism that remains—at six months—the longest in world history.

That same day, the labor federation in Gaza issued an appeal urged U.S. unions to “boycott the Israeli occupation and its institutions, and refuse to deal in any way with them, including: not buying any of their products, refusing to unload their ships and goods from sea and airports, and pressure them to stop their racist practices.”

Answering such appeals, on May 14, Italian dockworkers refused to ship weapons to Israel, and soon after, dockworkers in Durban, South Africa refused to unload Israeli cargo. This echoed dockers in South Africa, India, Sweden, Norway, Turkey, and the U.S. who had in earlier years refused to handle Israeli cargo during Israel’s serial bombardments that have killed and maimed thousands of Palestinians.

On May 18, the International Dockworkers Council asked “all dockworkers to show the solidarity that has been demonstrated so many times in so many conflicts. We cannot allow ourselves to be complicit in this violence by working on ships that operate war merchandise destined to massacre civilians and children. Let us not allow this to stain our name or tarnish our consciences.”

In the U.S., top labor officials have long supported the Zionist project, starting with the Balfour Declaration 1917, which envisioned a minority “Jewish national home,” in hopes of diverting widespread Jewish support for the Russian Revolution, and to serve as a European colonial outpost in Palestine. Soon, they embraced the Histadrut, the Zionist labor federation, which spearheaded anti-Palestinian apartheid, dispossession, and ethnic cleansing (see here and here), including the Nakba (Catastrophe) that established the Israeli state in 1948 (see sidebar).

In subsequent decades, U.S. union leaders across the political spectrum have supported Israeli wars; have branded as “anti-Semitic” those who criticized Israel’s close alliance with apartheid South Africa; and have bought huge quantities of State of Israel bonds, which paralleled overall U.S. economic and military support for the Israeli state.

This Labor Zionism has been coordinated by the Histadrut’s U.S. mouthpiece, the Jewish Labor Committee. While painting itself as progressive, the JLC has a long history of promoting Israel, U.S. wars of empire, and racism—including the 1968 New York City teachers strike against community control of the schools, and backlash against anti-affirmative action. Led today by Retail Workers (RWDSU) president Stuart Appelbaum, the JLC mobilized late-AFL-CIO President Richard Trumka and virtually all top U.S. union officials to attack BDS.

ROOTS OF LABOR SUPPORT FOR BDS

Despite this, the BDS movement has deep, if narrow, roots in labor anti-Zionism. In 1969 the Detroit-based League of Revolutionary Black Workers championed the Palestinian struggle as part of worldwide resistance to oppression.

This labor anti-Zionism began to reemerge soon after 9/11. On April 18, 2002, Local 10 of the Longshore and Warehouse Union (ILWU), which has a large Black membership and a long social justice history, condemned Israel’s attacks on the West Bank and “call[ed] for the halt of all military aid to the State of Israel.” That same day, New York City Labor Against the War, a multiracial grassroots organization, called for an end to U.S. military aid to Israel, Israeli withdrawal from the West Bank and Gaza, and support for the Palestinian right to return and for Israeli military resisters.

In 2004, to build on such solidarity, Al-Awda NY: The Palestinian Right to Return Coalition and New York City Labor Against the War jointly founded Labor for Palestine, a cross-union network whose statements have been endorsed by thousands of trade unionists.

In both 2010 and 2014, responding to intensified Israeli attacks on Gaza, West Coast dockers of ILWU Locals 10 and 34 in Oakland refused to unload cargo from ZIM Lines, Israel’s leading maritime shipping company. This reflected a long ILWU tradition of refusing to handle cargo for Nazi Germany (1934), fascist Italy (1935), Chile (1978), South Africa (1984), and U.S. wars in Iraq and Afghanistan (2008).

Soon after, UAW Local 2865 graduate students at the University of California, the Electrical Workers (UE), and a small number of other labor bodies issued pro-BDS statements (although 2865’s resolution was unilaterally nullified by the UAW International), often with vocal support from Jewish members opposed to Zionism.

In response to the May 2021 appeals from Palestinian unions, a new round of solidarity statements have been issued—not only by Labor for Palestine, Labor Against Racism and War, the United Electrical Workers, and UAW 2865, but also by labor bodies that have never done so before.

Above all, Block the Boat, a community-labor campaign first launched in 2014 by the Arab Resource and Organizing Center, successfully prevented the Israeli ZIM Lines ship Volans from docking anywhere on the West Coast in May and June, and has inspired Block the Boat campaigns in other U.S. and Canadian ports (see here and here).

While still at the margins, this unprecedented and rapidly-expanding worker-based Palestine solidarity has the potential to finally break Zionism’s century-long stranglehold on U.S. labor, and to organize workers’ unparalleled power—in their labor bodies and at the workplace—to help topple apartheid Israel.

Suzanne Adely is co-founder of the Arab Workers Resource Center, a member of U.S. Palestine Community Network, and President-Elect of the National Lawyers Guild. Michael Letwin is a former President of the Association of Legal Aid Attorneys/UAW Local 2325, on the Organizing Collective of USACBI: The U.S. Campaign for the Academic and Cultural Boycott of Israel, a co-founder of Jews for Palestinian Right of Return, and a member of the DSA BDS and Palestine Solidarity Working Group. Both are members of Labor for Palestine, Al-Awda NY: The Palestine Right to Return Coalition, and Block The Boat NY/NJ.

Related
The Supply Chain Disruption Arrives ‘Just in Time’ »
Interview: A Mexican Auto Worker on the Fight for a Real Union at GM's Silao Plant »
Captured by the Flag »
Insatiable Shipping Companies Set the Table for the Suez Canal Ship Debacle »
Global Cleaning Workers Share Their Struggles as the First Line of Pandemic Defense »