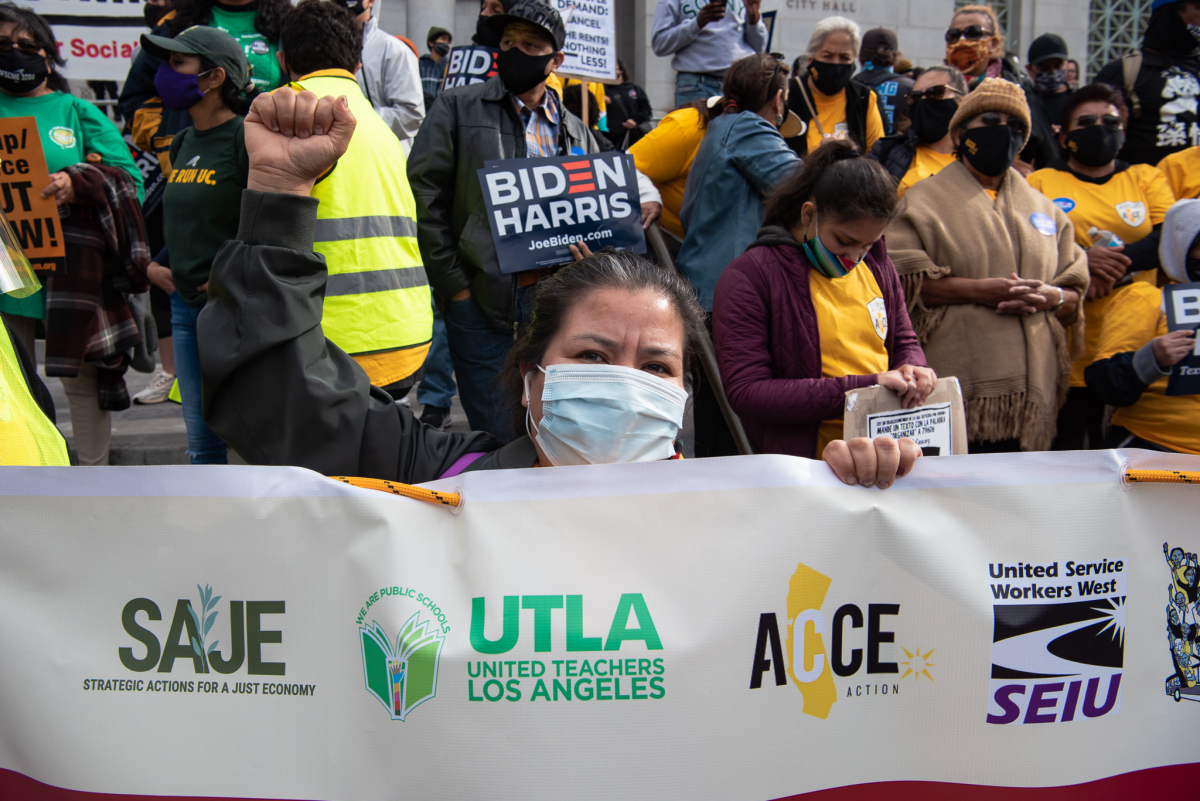 Leaders from United Teachers Los Angeles were among those who signed the pledge circulated by Labor Action to Defend Democracy. Pictured here, a banner and some of the 5,000 people who attended the “Count Every Vote” rally in L.A. on Nov. 7, 2020. Photo: UTLA

By late summer 2020, efforts to defeat Trump at the polls were running full-throttle—but many organizers and activists saw that even if these succeeded, the election could still be in peril. A broad array of networks and organizations began planning to defend the results and stop a possible coup. Labor Action to Defend Democracy (LADD) formed to bring union members and leaders into that work. As the election and its aftermath receded, the group took stock of what it had learned and accomplished, and reflected on where to go from here.—Editors

Labor Action to Defend Democracy came together in the fall of 2020 in response to the growing threat of an attempted coup by Trump and his supporters if the November presidential election did not go his way.

After four years of relentless lying and distortion from the Trump administration, designed to incite his supporters to violence, we assessed that it was possible that a mass action in the streets could become necessary to defend a fair election. Further, we knew that labor needed to be a part of such actions and prepared to initiate strikes if it became necessary.

Our choice to invite labor leaders into conversation outside of the institutional structures was informed by the response those institutions had to the Bush-Gore elections of 2000. At that time, national union leadership, instead of organizing workers to stop the stealing of the election, bowed to the wishes of the Democratic Party and did not organize. This time, we wanted labor to be prepared to take action independent of directives from either the AFL-CIO or the Democratic Party.

An informal committee came together to create a network of labor leaders who shared our assessment of the threat and the need to prepare for a response. We called weekly meetings, building the network through sharing of the link, lists, and word of mouth invitations.

In these meetings we:

From these meetings we disseminated information, invited people to take a pledge to defend democracy, and shared resolutions, plans for actions, etc.

We also set up a LADD resource page that included sample resolutions and letters, explanations of the steps for ensuring a fair election (and the places this could go wrong), articles, and other resources, including links to other groups engaged in organizing.

Altogether, 501 individuals signed pledge cards. At the height of activity, leading up to and right after the election, we had more than 130 people from across the country on calls, from organizations representing hundreds of thousands of workers. We shared 37 resolutions passed by central labor councils and local unions.

More than 400 people logged on at some point over our 11 meetings. These included leaders from three state labor federations, the United Electrical Workers, United Teachers Los Angeles, the Association of Flight Attendants, UNITE HERE, a handful of representatives from CLCs or area labor federations, Service Employees 1199 New England, the Massachusetts Teachers Association, the Chicago Teachers Union, the NewsGuild, and locals of the Amalgamated Transit Union, the United Auto Workers, the United Food and Commercial Workers, AFSCME, the American Postal Workers Union, and more.

We understood that if it became necessary for labor to take bold actions, including strikes, that would only happen if mass public actions were underway. So we invited community organizations to the network, including the Sunrise Movement, Jobs With Justice, Amazon Employees for Climate Justice, Amazonians United, the Emergency Workplace Organizing Committee of DSA/UE, and the Southern Workers Assembly.

We chanted or sang songs of solidarity at the end of each Zoom meeting, which helped keep our spirits up during a difficult time.

Here are some of the songs we sang:

“Which Side Are You On?” by Florence Reece

“Have You Gone to Jail for Justice?” by Anne Feeney

“All You Fascists Bound to Lose” by Woody Guthrie, as sung by Rhiannon Giddens and the Resistance Revival Chorus

When the Democratic Party, as we had anticipated, told organizers to stand down, LADD continued to report and support rallies both defending and celebrating democracy.

We continued to meet weekly as we approached inauguration day in case a mass action would be required, to keep each other informed of developments and to raise awareness and solidarity around efforts to defend the vote in Georgia. The calls also became a place to begin to lay out the issues and demands we have for the Biden administration. These included organizing for climate justice, against austerity, for the PRO Act, and for expanded voter rights.

We learned some things about the labor movement through this work. There is a wide network of left leaders who are looking for a way to connect, organize, and strategize to win. Some of these leaders are connected to central and statewide labor councils, but most are out there on their own and do not see labor institutions as they are currently constituted as a space for militant, class-struggle unionism.

These leaders, dispersed widely across the country and in various sectors, were eager to come together around a specific struggle.

We learned a lot from each other on the calls. The examples of on-the-ground organizing, talking to members, and preparing for actions reminded us of the steps we need to take to build our strength. This kind of sharing is critical to educate leaders and members about how to organize for power.

We were reminded as well that the defense of democracy goes beyond defending the vote; it begins on the shop floor and in our unions, where democratic participation, debate, and action ground class-struggle unionism. Further, it appears to us that a much more robust discussion needs to take place in many unions about the necessity of full democratic rights for workers’ rights and union rights to flourish.

The crises we face continue to smolder and burn. The disgraceful January 6 attack on the Capitol in an attempt to stop the vote certification, and the unrelenting state voter suppression measures (now up to 389 filed bills), spell trouble ahead, likely leading up to the 2022 elections. While we have paused our meetings, we stand ready to reactivate the network as necessary. The hole in the left labor movement remains. But we are ready with others to act on issues and build what needs to be built.

(Organizations listed for identification purposes only.)

This article is being co-published with Organizing Upgrade.