OSHA Conducted Half as Many Inspections During Pandemic, Even as Complaints Increased 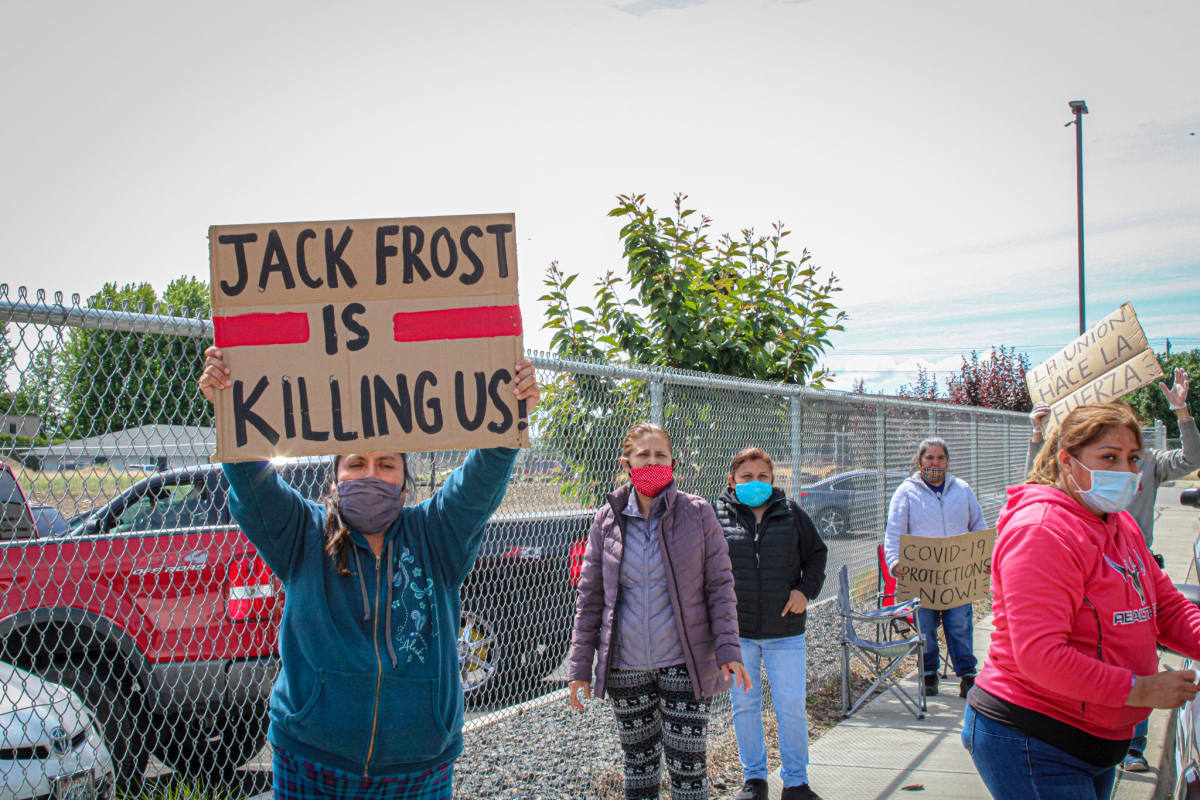 OSHA has been missing in action for much of the pandemic, performing half as many inspections—and most of these remotely—even as complaints and coronavirus deaths in soared. In the Yakima Valley, Washington, apple packing workers struck last May to demand better safety precautions in packing sheds, where they work shoulder-to-shoulder in front of fast-moving conveyor belts. Photo: Familias Unidas por la Justicia

According to a recent report, during the first nine months of the Covid-19 pandemic the Occupational Safety and Health Administration (OSHA) received more complaints but performed far fewer inspections than usual. Between February 1 and October 26, 2020, OSHA received 15 percent more complaints but performed 50 percent fewer inspections when compared to a similar period in 2019. To make matters worse, most of these inspections were not conducted on-site, even as U.S. coronavirus deaths skyrocketed and many outbreaks were linked to workplace transmission.

OSHA is responsible for the safety and health of 130 million workers employed at eight million worksites. However, the agency has long been criticized for having too few inspectors and for issuing penalties that were too soft to alter employer behavior.

According to the report from the Department of Labor’s Inspector General, OSHA issued 295 violations for 176 Covid-related inspections during this nine-month period, while state-related reviews resulted in 1,679 violations for 756 COVID-19 related inspections. (There are now 22 state OSHA plans which cover both private and state and local government workers and six state plans that cover only state and local government workers.)

The use of remote inspections drew special attention from the Inspector General. Because inspections are remote rather than on-site, the report said that “hazards may go unidentified and unabated longer, with employees being more vulnerable to hazardous risk exposure while working.”

While remote inspections might help mitigate potential transmission of Covid by those involved in the inspection process, the report determined that reduced on-site inspections could result in more worksite accidents, injuries, deaths, or employee illnesses.

“The lack of on-site inspections may impact OSHA’s ability to observe employer practices, quickly mitigate any potential hazards, and issue violations sooner to control the spread of disease to other employees,” the Inspector General said.

The report also observed that on-site inspections historically result in prompt corrective action for at least a portion of hazards identified. A 2017 Inspector General review, for example, reported that for approximately one-third of the OSHA-issued citations reviewed, “employers abated the hazard during the inspection or with 24 hours of OSHA identifying the hazard.”

While the report provided no breakdown of Covid deaths by industry, the Midwest Center for Investigative Reporting reports that as of February 26, there have been at least 45,000-reported positive cases related to meat and poultry processing. In that industry, there were at least 483 outbreaks in 38 states, with at least 243 reported worker deaths in 62 plants in 27 states.

In addition, a recent University of California-San Francisco study of Californians aged 18-65 in the March through October 2020 period found that cooks had the highest risk of mortality, followed by packaging and filling machine operators, agricultural workers, bakers and construction workers.

Brian Michael Doherty is a freelance writer and a retired AFGE Member.