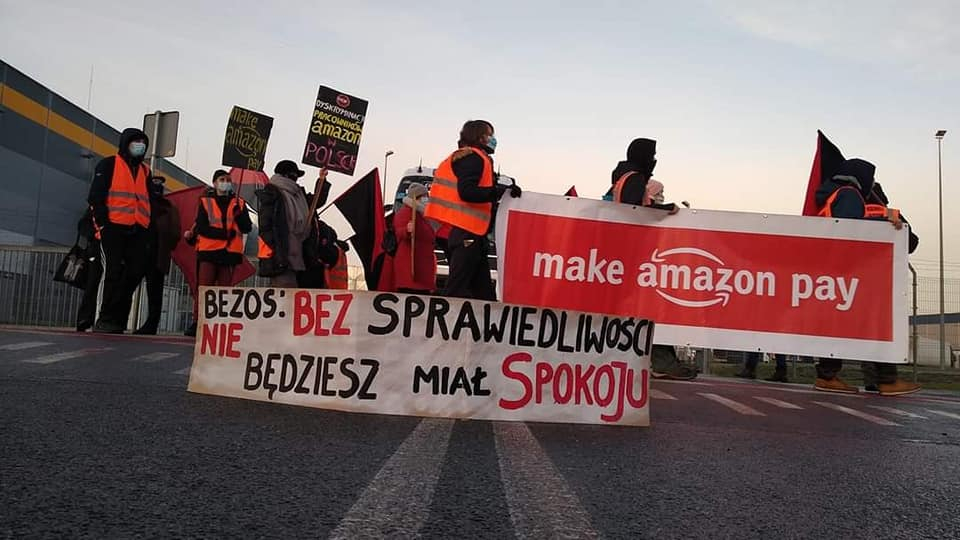 While workers picketed at the entrance of an Amazon warehouse in Wroclaw, Poland, on December 15, supporters blocked two entry points for trucks delivering and picking up packages, stopping 80 trucks from loading and unloading for several hours. Photo: Amazon Workers International

On November 5 Amazon workers at a warehouse in Wroclaw, Poland (Amazon WRO1) stopped work to demand that they receive the same 2,000 zloty ($530) bonuses that recruitment agencies are paying to new workers.

In the following days workers from other Polish sites joined the protest behind the slogan “2,000 zloty for everyone,” which many have scrawled on the back of their orange health-and-safety vests.

The Amazon WRO1 warehouse is the company’s only fulfillment center in Poland that handles bulky, big, and heavy items. More than a thousand forklift truck operators are employed there, stowing and picking items from high-racks.

The vast majority of forklift operators on the day shift in the dock and ship departments took part in the protest; night shift workers also stopped work for an hour, while 180 workers in the customer returns department turned on the red andons—light signals informing workers that it’s impossible to keep working—for several minutes.

Amazon employs 18,000 permanent staff plus an additional 10,000 temp workers in its eight Polish fulfillment centers, which operate for the e-commerce giant’s German platform, amazon.de (the company does not sell goods in Poland).

The recruitment bonus caused a big stir among permanent and temp workers who’ve been at the company for several months, as they were not entitled to it.

The discontent has also grown because the majority of Polish Amazon warehouse workers have not received any wage increases this year—even as company owner Jeff Bezos has seen his wealth grow unimaginably. Bezos is now worth $189 billion, up $74 billion since the start of the year.

Since 2015, in the third quarter of each year Amazon Fulfillment Poland has been conducting a so-called “payroll review,” comparing earnings in the region in warehouses and similar industries. For the first time in five years the company did not increase the base salary of 20 zloty per hour ($5.30), claiming it is still competitive.

After protests by Amazon workers in various countries earlier this year, Amazon in Poland offered a Covid bonus from mid-March to mid-May. However, unlike the majority of European and U.S. warehouses, where workers received a $2 or 2 euro an hour bonus, Polish workers only received $1 (4 zloty)—even though, as they point out, they work just as hard. Amazon is also providing a similar amount as a Christmas bonus in November and December.

The second wave of the pandemic has recently hit Poland hard. Amazon employees, along with other warehouse and logistics workers, are called heroes, whose labor makes it possible to fulfill orders during the lockdown. But the ongoing mass recruitment by Amazon means even more people are coming into contact with each other every day in company buses, checkrooms, canteens, and hallways, risking their health.

Many workers believe that they should be getting both the Covid bump and the Christmas bonus, and that the latter, often relied upon to repair household budgets at the end of each year, should be much higher.

On December 15, protests to demand the 2,000 zloty bonus and an end to the disparate treatment of Polish workers expanded to Amazon’s WRO2 warehouse, also in Wroclaw. While workers picketed at the entrance, supporters blocked two entry points for trucks delivering and picking up packages, stopping 80 trucks from loading and unloading for several hours.

Christian Krähling, a German Amazon warehouse worker who was key in forging international connections, passed away on December 10, his 43rd birthday—a devastating loss for the global labor movement. 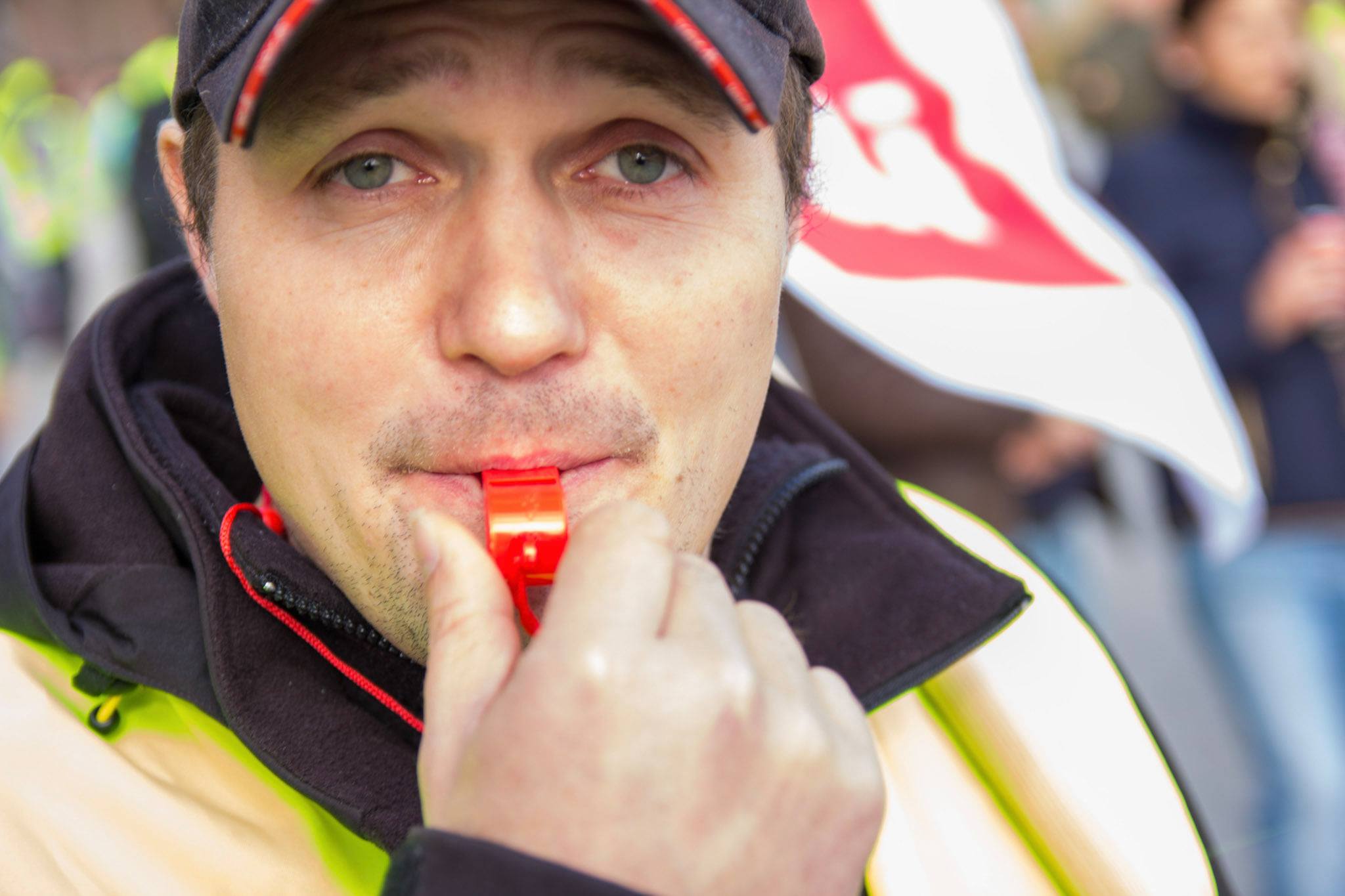 Christian had worked in Amazon’s Bad Hersfeld fulfillment center since 2009. He was a member of the works council there and at the forefront of German workers’ battles with the company. He was also a founder of Amazon Workers International, a network that connects rank-and-file Amazon workers across the globe. In recent weeks he had scrawled the Polish Amazon workers’ slogan, ‘2,000 Zloty for Everyone,’ on his vest, and posed for photos with co-workers outside his warehouse for the #MakeAmazonPay actions, donning souvenirs from international contacts he had made: the flags of Workers’ Initiative, of Spain’s CGT Amazon, of France’s Sud Solidaire, and a badge from the Amazonians United in the U.S., used in their campaign for paid time off.

Christian was a member of the ver.di trade union. However, his relationship with its leaders and officials was often conflictive. Fellow workers were his point of reference, not union bureaucracies, political parties, or NGOs. Asked if AWI should cooperate with such organizations, he was strategic, saying, "During the last nine years of our organizng, dozens of outside organizations approached us offering support. But they all came and went. It is us who stayed always here, in the warehouses, with our people.” He was however happy to build coalitions with Amazon workers on the different levels of the corporate ladder: when two workers were fired at Seattle’s Amazon headquarters, he took part in a solidarity sick-out day …

“Christian, we are going to continue our common project, and we know you will be with us on every picket line,” write Amazon Workers International. “Thank you for the inspiration that you gave to us! We will keep on fighting!”

Inicjatywa Pracownicza (Workers' Initiative) is a Polish union which has been organizing Amazon workers since 2014. For updates on struggles by Amazon workers globally, follow Amazon Workers International on Facebook.