Today the United Auto Workers announced that it has dropped its legal effort to save three General Motors plants from closure. It’s sad evidence that even a union contract doesn’t guarantee job security for auto workers.

After a large number of plant closings in the 1980s, the UAW bargained contract language that prohibited automakers from closing plants during the life of the agreement.

So the companies began to “idle” plants instead.

This created a twisted pattern between the union and the automakers. Every settlement, the union would claim it had finally won job security for auto workers. But the Big Three would get around the agreement, often by simply inventing new synonyms for closing a plant.

Case in point: in November 2018, GM announced it was “unallocating” product to three plants: Lordstown Assembly in Ohio, Warren Powertrain in Michigan, and Baltimore Powertrain in Maryland.

This was in direct conflict with the UAW’s 2015 collective bargaining agreement with GM, which already contained eight different terms for plant closures: “during the term of the new Collective Bargaining Agreement, the Company will not close, idle, nor partially or wholly sell, spin-off, split-off, consolidate or otherwise dispose of in any form, any plant, asset, or business unit of any type, beyond those which have already been identified, constituting a bargaining unit under the Agreement.” 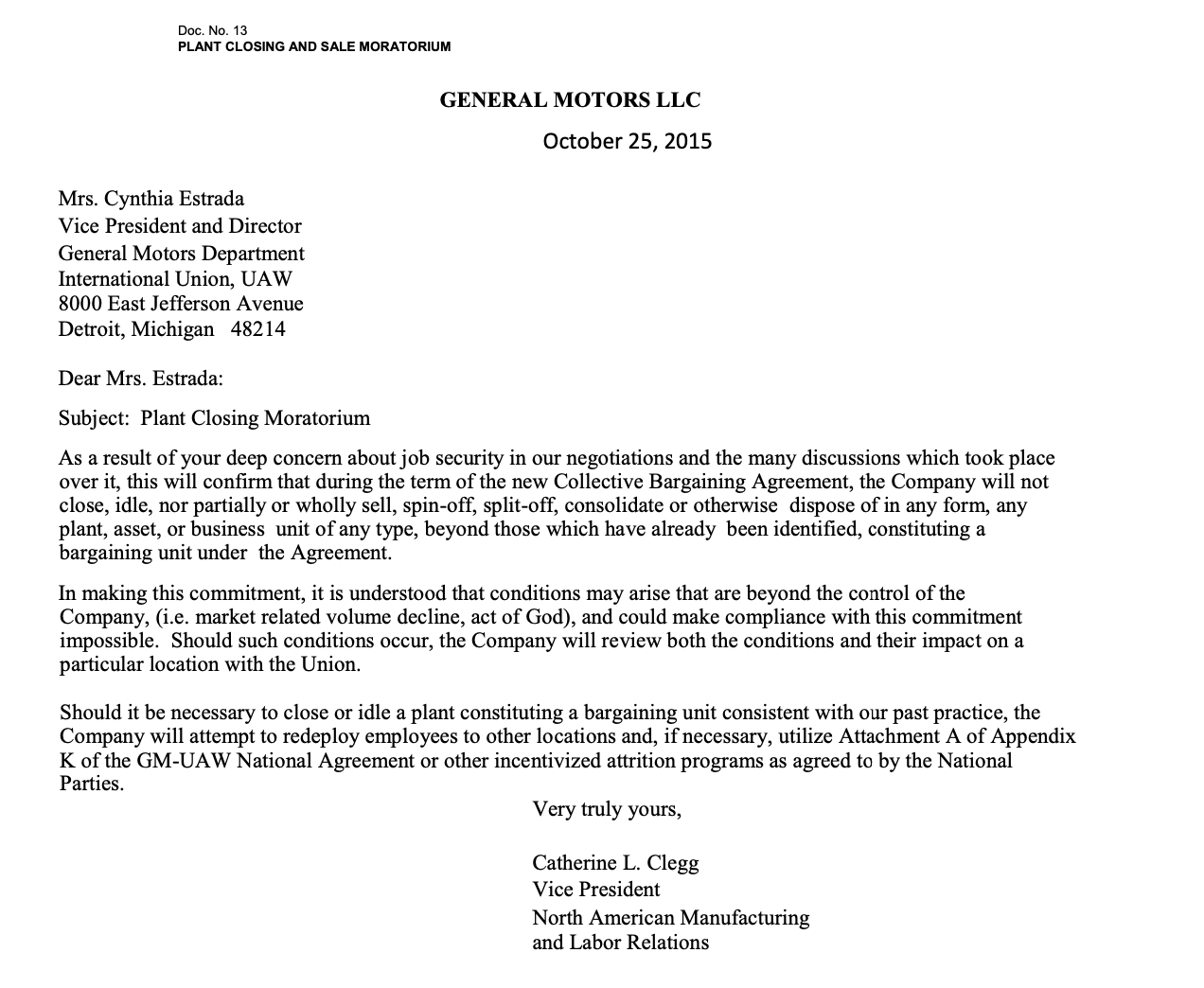 This Memorandum of Understanding is part of the 2015 contract between the UAW and GM.

The union filed a complaint against GM in federal court for violating the terms of the agreement—but then agreed to drop the legal action as one of the conditions for settling the new collective bargaining agreement.

That agreement was ratified by a narrow majority, with 56 percent of auto workers voting yes. Many felt that the contract fell far short of their goals to bring more jobs in-house and protect the jobs that remained. Part of what animated the 49,000 striking workers was a desire to climb out of the hole, after decades of having their jobs cut, partitioned out to subsidiaries, and reduced to lower-paying tiers with fewer benefits. Over the past three years, GM has posted a profit of $35 billion.

The lesson for the employers is also clear: all they need to defeat the once-mighty UAW is a thesaurus and a little patience.

Flight Attendants Tell Airlines: Don't Even Think About Concessions
Full Steam Ahead on Reopening Schools? No Way, Say Teachers
Viewpoint: Pro-Labor Candidates Are Upending New York Politics—But Where Are the Unions?
Maine Shipbuilders Bring the Hammer Down to Reject Concessions