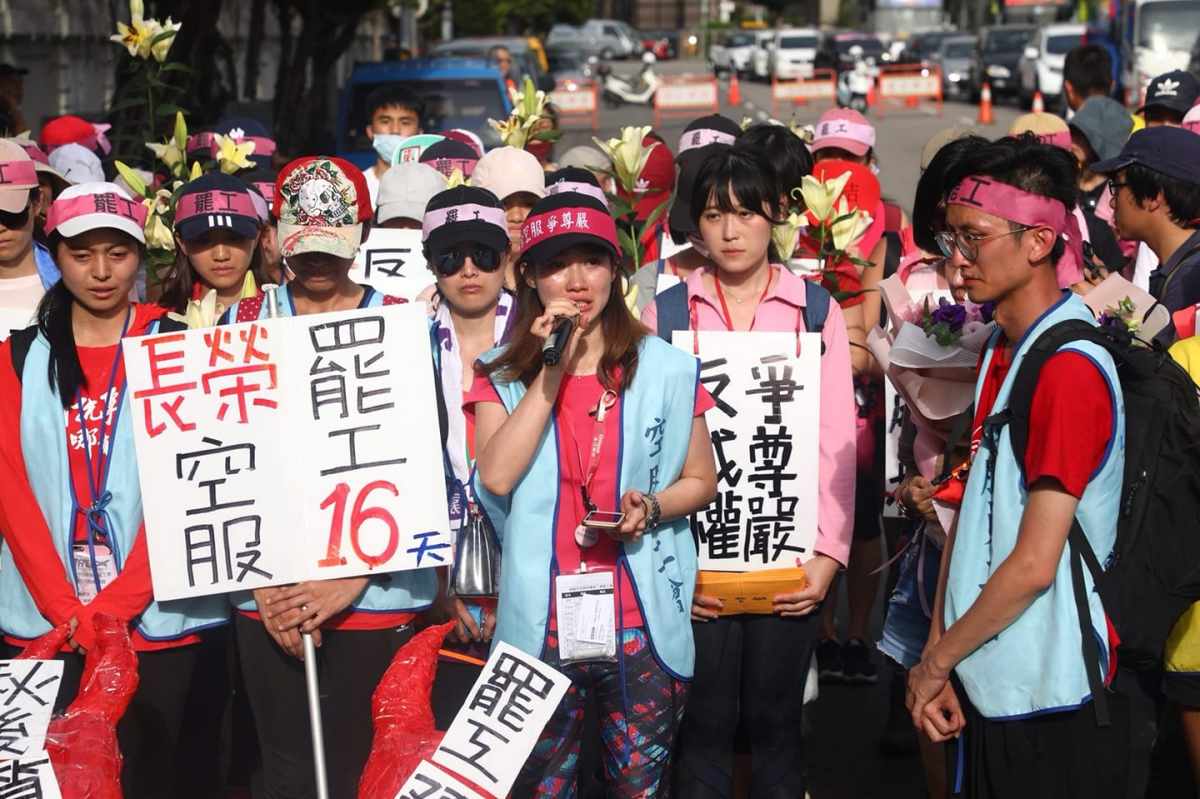 EVA Air flight attendants demonstrated on Day 16 of their strike, which has become the longest in the history of Taiwan's airline industry. Photo: Taoyuan Flight Attendants Union

UPDATE, July 8: EVA Air flight attendants reached an agreement over the weekend to end the strike. Flight attendants will head back to work on July 10. Read more details of the agreement in this article from New Bloom.—Eds.

Thousands of flight attendants—all of them women—are on strike in what has now become the longest walkout by airline workers in Taiwan’s history.

As of July 2, the EVA Air strike had disrupted 2,000 flights, including cancellations through mid-July, and cost the company $56 million.

Last week, after a meeting top EVA Air management, flight attendants agreed to make significant compromises in their demands, understanding that doing so would pave the way toward ending the strike. But a settlement is still blocked because the company is refusing to agree not to retaliate against the strikers.

After that move, “it finally dawned on union members that the main purpose of EVA Air throughout this dispute is not to safeguard its money,” write leaders of the Taoyuan Flight Attendants Union in a statement below, “but to defend the arbitrary power over workers EVA management have always enjoyed ever since its founding 30 years ago.”

July 2, 2019
Circulate this call on Facebook by clicking here.

EVA Air, a member of the Taiwan-based maritime giant Evergreen Group, and a longtime winner of Skytrax’s “Five-Star Airline of the World” title, has proved itself to be one of the ugliest union-busters in Taiwan after its all-women cabin crew went on strike on June 20. The company spares no expenses in mobilizing a fake-news smear campaign, legal harassment, shady political dealings, and every crooked means in its arsenal to prevent its employees from unionizing and defending themselves from rampant authoritarianism in EVA’s management practices. Even after the strikers reluctantly voted to compromise and accept the terms offered by the company on the tenth day of the strike, EVA Air decided to renege on its offer, insisting on retaliating against whomever management perceives as troublemakers, and refusing to negotiate in good faith. This is one step too far from any definition of human decency. The Taoyuan Flight Attendants Union (TFAU) calls upon all supporters of labor rights in the world to voice their anger at EVA Air and urge the company to negotiate in good faith.

EVA Air was founded in 1989, just after the lifting of martial law in Taiwan. Its management style, however, remains highly militarized and patriarchal, refusing even to this day to hire male flight attendants, for instance. Job applicants are regularly asked, “Do you think there should be a union representing you?” Whoever answers “yes” is immediately shown the door. Grievances of EVA’s cabin crew range from rampant harassment neglected by the management to chronic fatigue and other occupational health and safety and flight safety issues. So, when the cabin crew in another Taiwan-based airline, China Air, organized with TFAU and succeeded in their first strike in 2016, the overwhelming majority of EVA’s cabin crew chose to join the union.

After two years of arduous negotiation with EVA management, TFAU filed for arbitration earlier this year and initiated a strike vote in May in accordance with labor laws in Taiwan. More than 2,900 of the more than 3,000 TFAU members at EVA Air voted to strike. The strike started on June 20 after yet another round of negotiations broke down. EVA Air promptly started its anti-strike measures. As one of the largest advertisers in Taiwan, EVA enjoys overwhelming support from mainstream media. This is exacerbated by rampant troll attacks on social media, spreading numerous nasty, misogynist rumors and rants against EVA attendants. Against all odds, more than 2,300 strikers held on for 10 days on the picket line in front of the EVA Airline headquarters.

On June 28, Lin Bou-Shiu, chairman of the board of EVA Air, called for a meeting with the union officers. He offered to sign a collective bargaining agreement if the union agreed to his terms that are only slightly better than what EVA offered before the strike began. A non-retaliation clause was understood by all as a precondition to such an agreement. The officers put the terms to the membership for extended deliberation and a vote. Even with tremendous dissatisfaction, for fear that some members and officers of the union may be retaliated against if this show of goodwill from the management is refused, a majority of the strikers voted to accept the terms, to authorize the resumption of negotiations toward a full-fledged collective bargaining agreement, and to end the strike as soon as the agreement is signed.

To the surprise of the TFAU members and the public, when union officers and attorneys showed up to resume talks with EVA Air on the evening of June 29, the company sent in only mid-ranking managers and lawyers without sufficient authorization to negotiate. The company representatives broke off talks in 10 minutes and released a long press release in which the company insisted that employees who it deems in violation of company rules will be subjected to “proper punishment.” It finally dawned on union members that the main purpose of EVA Air throughout this dispute is not to safeguard its money, but to defend the arbitrary power over workers that EVA management has always enjoyed ever since its founding 30 years ago. This dispute has thus become a fight of the entire labor movement against the capitalist class in Taiwan represented by the EVA management.

Therefore, we call upon our sisters and brothers throughout the world. If you share our belief that all workers are entitled to union representation and dignity on the job, please send your solidarity to Taoyuan Flight Attendants Union at tfaunion[at]gmail[dot]com. And if you share our anger over EVA Air’s hideous union-busting, please send your protest letter to Chairman Lin Bou-Shiu and President Sun Chia-Ming, c/o davidchen[at]evaair[dot]com.