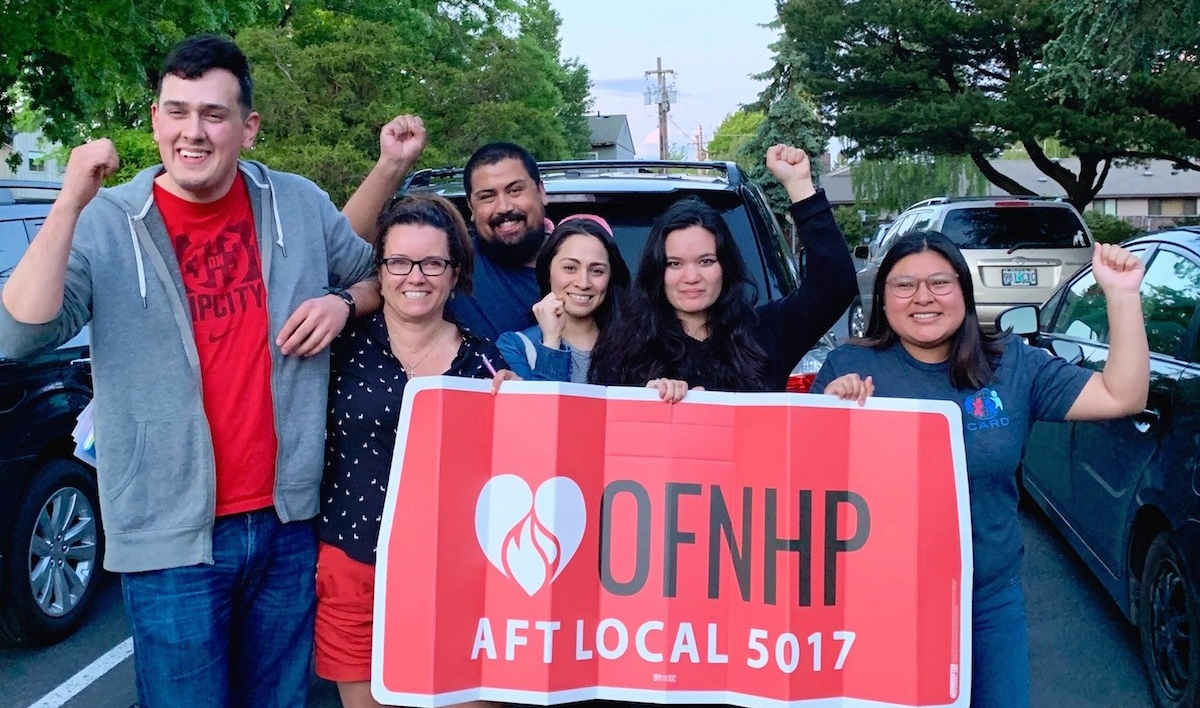 This story was first published by Northwest Labor Press. But there’s a Labor Notes connection—one of the workers who led the effort started by reading our book Secrets of a Successful Organizer. Get your copy here. —Editors

After weeks of comically ineffective pleading by the company CEO and a pair of hired-gun union-busters, a group of 30 low-wage behavioral therapists and administrators who work with autistic children voted May 23 to unionize. They’re now part of 5,100-member Oregon Federation of Nurses and Health Professionals (OFNHP).

The vote took place at the Center for Autism and Related Disorders (CARD) in Northeast Portland. Eighteen workers voted for the union, and four against.

CARD, based in Woodland Hills, California, is a for-profit chain. On its web site, the company describes itself as the world’s largest autism treatment provider, with 239 locations in 33 states, including 16 in Oregon. It’s privately held, and last year was bought by Blackstone, one of the world’s largest private equity firms.

CARD uses a therapy called applied behavior analysis to teach basic skills to autistic children. The company claims its methods have helped children recover from autism. But the front-line behavioral techs who provide CARD’s therapy are paid near the legal minimum wage. New hires get two weeks of training — one week watching videos and one week paired with a more experienced worker — before they’re assigned to work one-on-one with an autistic child aged 3 to 17. The therapy consists of sessions of one to five hours, as often as several times a week, and can go on for years, with insurers picking up the tab.

WORKERS ARE ORGANIZING THEMSELVES

The union campaign at CARD was initiated by Mica Rudich, a recent Whitman College enrollee who responded to a Craigslist ad in August 2017 and was hired at $14 an hour. Rudich was told she’d get health insurance benefits if she worked 30 hours a week for three months, but she found herself short of that threshold when managers would schedule her 29.5 hours in a week. Later, she was told benefits would only be forthcoming if she maintained 30 hours a week in certain specific months. It never happened.

Rudich also noticed that she and her co-workers weren’t given 10 minute rest breaks every four hours, as required by Oregon law. So she and co-worker Oscar Lemus circulated a petition and got 25 co-workers to sign. They presented it to management March 16, 2018. Soon after, schedules were modified to allow for breaks.

Could more be done to improve conditions, she wondered? Some of her co-workers were having trouble paying the rent and relied on food from local charities. Rudich herself works two other jobs. Turnover at CARD is high. A year after her petition, three fourths of the signers had moved on.

“The therapy suffers because the turnover is so high,” Rudich told the Labor Press. “In order for the kids to get quality therapy, you need experience, and time to build a rapport.”

Rudich says she knew nothing about unions, so she did a Google search for “labor union” and learned what she could. And she started talking with her co-workers. After a few months, they shopped around for unions, and settled on OFNHP. The union represents mental health therapists and technicians who work with autistic patients at Kaiser Permanente. Those workers make $20 to $45 an hour plus benefits. OFNHP assigned organizer Chris Johnson, who met with CARD workers to prepare them for the campaign.

Then, in April, CARD management found out about the union. The cat out of the bag, OFNHP filed a petition April 26 asking the National Labor Relations Board to hold a union election.

The company’s anti-union campaign began immediately. First, company lawyers flew up from Los Angeles to talk them out of the union. They weren’t very persuasive.

Then a pair of anti-union consultants, Eduardo and Arlene, arrived. They sat waiting in the lounge to talk with workers on break, and even talked with workers while they were working with children.

When pro-union workers asked Eduardo and Arlene who their employer was, the answer was “Labor Diverse.” But the text at LaborDiverse.com, a Google search showed, was identical to text on the web site of Cruz and Associates, the same union-busting firm that New Seasons Market and Trump International Hotels hired. After union supporters pointed that out, the copy-cat text disappeared from the site, replaced by “Under Construction.” The site also lists lcruz[at]labordiverse[dot]com as a contact. [Cruz and Associates is headed up by one Lupe Cruz.] A month later, the “LaborDiverse” site remains under construction. [Want a clue as to the quality of the union-busters CARD hired? The “Labor Diverse” corporate logo has a typo: It says “consutlting” instead of “consulting.”]

THE CEO WHO HAD FORGOTTEN TO LOVE HER EMPLOYEES

Twenty days before the union election, CARD founder and CEO Doreen Granpeesheh emailed an absurd company-wide love letter to workers at all 239 clinics, addressing her 6,000 employees as “my extended family,” “my fellow CARDians,” and “my dear BT1s.”

“As I fly from one of our southern clinics to one of our northern clinics, I want to take a moment to tell you how very much I appreciate you all!” Granpeesheh wrote. “You are all amazing, and I am so grateful that you’ve given CARD an opportunity to become your forever home.”

“I want you to know that I am dedicating this year to our employees! We are planning many changes that will lighten your load and improve your working conditions.”

Granpeesheh used the internal email address CARDAllEmployees[at]centerforautism[dot]com. She may not have intended for that to be visible. But it gave one union supporter an idea: What would happen if he replied to that address?

“Just FYI, this email is coming because one of the CARD offices is holding a union vote, and they don’t want you to do the same,” he wrote.

Did all 6,000 employees receive it? Some surely did. Almost immediately, the company’s email system was taken down, and even the email app itself was deleted from company-provided tablets.

But it didn’t go as Granpeesheh planned. At an anti-union meeting she led, union supporters talked back, and Granpeesheh ended the meeting early.

“I think she could tell it wasn’t going well,” Rudich recalls. “At the end she said, ‘just vote no, okay?’”

The threat of an empty room at her anti-union meeting prompted an email from the CEO.

“I heard some of you are planning to boycott my speech today! That’s very unfortunate for everyone,” Granpeesheh wrote to employees. “I am holding this meeting tonight, not because I want to influence you to vote in my favor. I am holding the meeting so that you can hear the truth about unions.” The email goes on and on, as Granpeesheh pleads with her employees to come hear her anti-union pitch. [You can read the whole sordid thing here.]

After all that effort by the company, only two workers changed their minds, and — along with a new hire and one worker who was always opposed — made up the four who voted against the union.

For the workers at 102nd Avenue, their next step is to bargain a first contract. Workers hope through the union to be able to raise wages, reduce turnover, and end practices like split shifts where they might work 10 to noon and then sit around three hours unpaid for a 3 to 5 shift.

The Labor Press contacted CARD to confirm details of this story, and was directed to human resources director Judith Friend. Friend did not return the call.