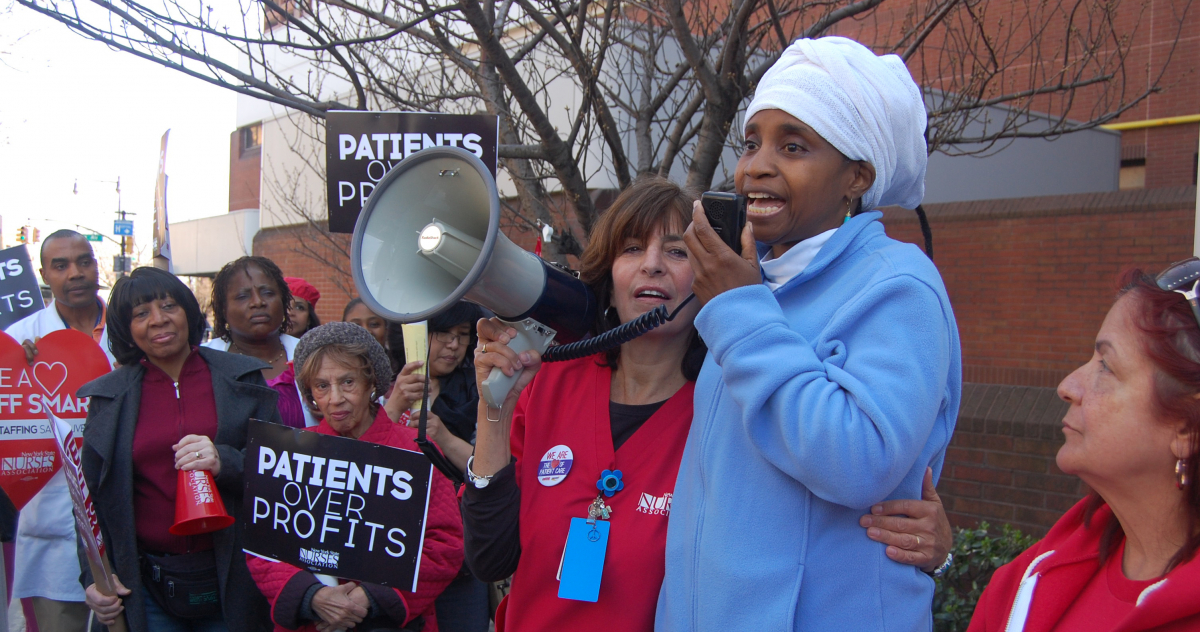 Nurse unions across the country are fighting to establish limits on nurse-to-patient ratios. Photo: Dan Lutz.

Thirteen thousand nurses may be on strike in March at three of the largest employers in New York City.

For several months, hospitals in the Montefiore, Mount Sinai, and New York Presbyterian systems have been bargaining jointly with the New York State Nurses Association.

NYSNA is demanding that the contract include safe staffing ratios, which would limit the number of patients that bedside nurses could be assigned. The number would vary depending on the department. For example, nurses in medical-surgical units and emergency departments could be assigned no more than four patients; and nurses in an intensive care unit, no more than one.

But the hospitals are balking. “They have told us, ‘Drop the ratios and we will talk,’” said Michelle Gonzalez, a nurse in the intensive care unit at Montefiore.

“I’m ready to strike,” she said. “I won’t just be an unquestioning part of a machine. I will stop the machine if that is what it takes to win better standards for my patients.”

Fighting for Safe Patient Ratios across the Country

Nurse unions across the country are fighting to establish limits on nurse-to-patient ratios. Nurses at the University of Michigan won ratios in their contract after building a credible threat to strike.

Nurses at Baystate Franklin Medical Center in Greenfield, Massachusetts, had to go on strike—twice—to win safe staffing ratios in their contract.

Currently, only California has passed a state law that limits the number of patients that nurses can have at hospitals, both union and non-union.

The Massachusetts Nurses Association led a ballot initiative to pass similar legislation last year, but lost more than 2 to 1 after an aggressive campaign by the state’s hospital association.

Even though Democrats are now in control of the New York State Assembly and Senate, similar legislation is unlikely to pass without a major fight.

The union has spent half a year organizing contract action teams (CATs) in each hospital. Members in the CAT keep their coworkers informed and engaged throughout bargaining to get the union strike ready.

Nurses like Gonzalez participated in a union leave program, taking a month off the job to work full-time organizing CATs in their hospital. The union set aside funding for 10 nurses to participate in this program each month. So far, 30 have been through the program.

One of Gonzalez’s initial goals was to make sure that the union’s contract action team was representative—that it included a nurse from each department, on each shift. If there wasn’t one, then Gonzalez had to recruit and train one.

“The first step is to get a CAT member comfortable speaking to everyone on their shift, like asking them to sign a petition,” Gonzalez said. “Then I take them rounding with me, where I walk through the hospital to all the different units, to drop materials off and give updates. It’s teaching by doing.”

The Montefiore CAT members also participate in weekly conference calls, where they discuss bargaining updates, upcoming actions, and share information about what is going on in the hospital. Currently, there about 100 active CAT members at Montefiore.

Tre Kwon, a nurse in the medical intensive care unit at Mount Sinai, also participated in the union leave program at her hospital.

Kwon performed rounds as well. She used the meetings as opportunities to recruit members to attend and participate in the union’s open bargaining sessions.

“The unit leader would push people to take a few minutes out of their crazy day to meet in the break room,” she said, “and we would talk about the issues that were going to be discussed at upcoming bargaining dates.

“We had bargaining dates dedicated to safe staffing, paid maternity leave, pay parity, retiree health care. We had members write up testimonies ahead of time to present at the bargaining table.”

Four hundred nurses attended the bargaining session where safe staffing ratios were discussed, and members had an opportunity to speak.

“It takes a lot of courage,” Kwon said, “to point a finger at the hospital directors about the needs of patients." She added “It really showed the boss how fired up we are and how passionate and fearless nurses are.”

Community organizations like the Northwest Bronx Community and Clergy Coalition also spoke at this bargaining session, demanding that the hospital address patient overcrowding.

The union is demanding contract language for a “community outreach committee,” where the union, community groups, and hospital management would meet and discuss ongoing issues. It would also allow the union to give tours of the hospital to community groups.

The union will have informational pickets at thirteen hospitals on February 13 (see below).

A strike authorization vote will follow close behind. Federal law requires nurses to give hospitals 10 days’ notice before a strike.

Nurses will be picketing the following locations on February 13, and invite other union members and community supporters to join them: