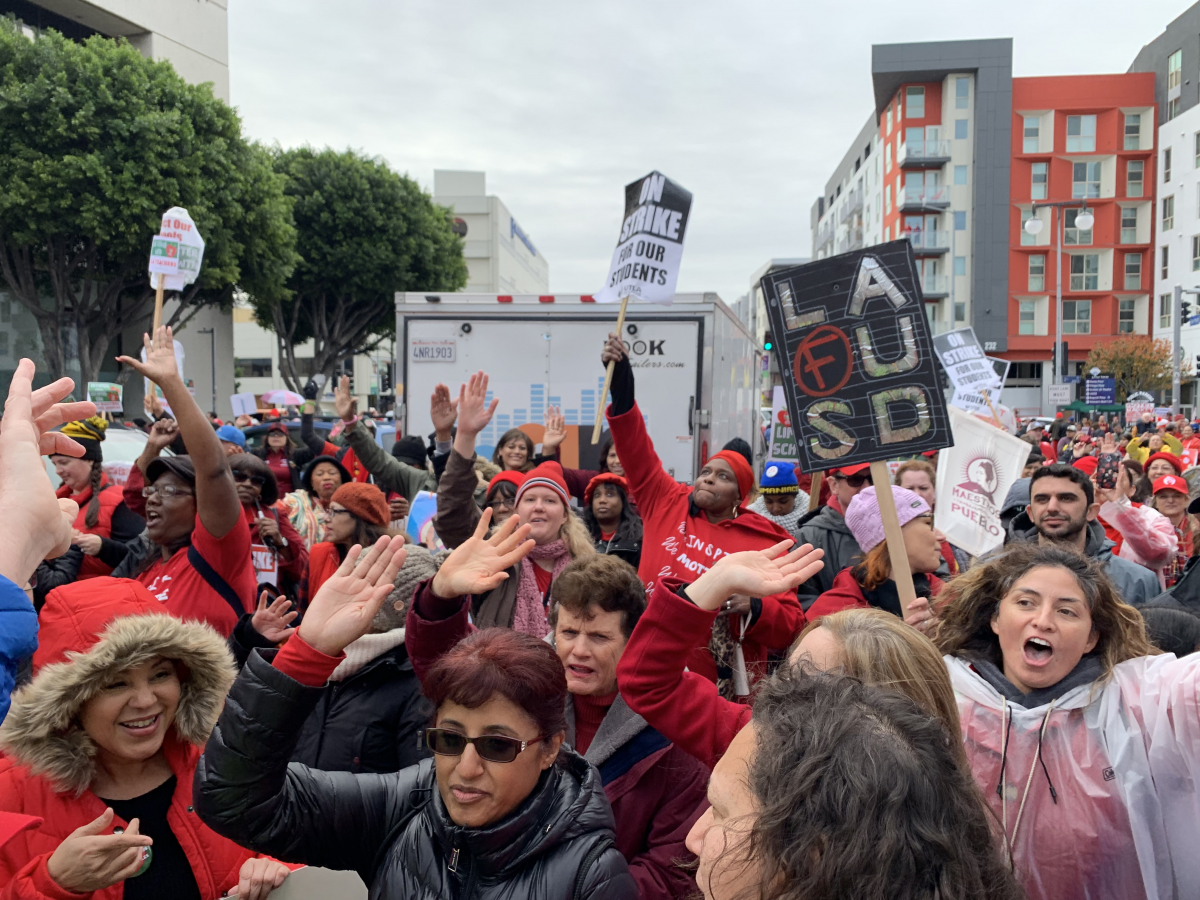 Trainings for parents helped United Teachers Los Angeles build up to this 50,000-person rally outside the California Charter School Association on day two of the strike. Photo: Chris Brooks

Yesterday for the second day in a row, 50,000 people rallied in support of the striking teachers of Los Angeles.

This time our target was the California Charter School Association, the lobbying arm behind the rapid expansion of unregulated charter schools in Los Angeles. It’s funded by billionaires like Eli Broad and Netflix CEO Reed Hastings.

The CCSA has pursued a plan to move one million students from public schools into charter schools by 2022.

The street was packed. As I squeezed through the crowd, one teacher quipped, “It’s still not as crowded as my classroom!” An apt remark, since charters are to blame for driving up class sizes for public school students.

Here’s how the vicious cycle works: Section 1.5 in the union contract allows the district to declare a “fiscal emergency” and override class size limits, cramming more students into a classroom. That means layoffs for teachers and support staff; many get absorbed by charter schools.

The emptied classrooms are handed over to charters, too—many L.A. charter schools are actually “co-located” inside public schools. “I think the magic number is six empty classrooms,” said Karla Griego, a teacher at Sotomayor Learning Academies. “Once that happens, the charter school can come in.”

(Griego and other strikers quoted in this story spoke last night on a video call hosted by Labor Notes. Check out the full video here.)

The more the charters grow, the more money they drain from the public schools budget… and the worse the budget looks, the more the district can justify saving money by squashing even more students into a class.

Elijah McIver is an 18-year-old senior at University High School. I met him today on the picket line—he showed up despite the rain to support the demand for smaller class sizes.

His biggest class yet: a math class with 43 students. With that many students, McIver said, a teacher can’t give students much individual attention: “They have to go around. They can’t really focus on your specific needs.

“When we broke up into groups it was horrible, it was like chaos,” McIver said. “The teacher tries to quiet down the room, and people still keep on talking because people are telling other people to be quiet, and it just keeps getting louder and louder.”

United Teachers Los Angeles has made eliminating Section 1.5 a big focus of its contract fight. This clause is crucial to the billionaire-backed plan to replace L.A.’s public schools with a privatized charter-school system.

People here understand these connections—and not just teachers, but also the students and parents who are fighting alongside them.

Charter co-locations in particular have rankled teachers, students, and parents. Every day, they could see the inequality on display.

Charters were taking over valuable spaces in the schools, said Griego, “like the computer lab or the parent center or the room where the school psychologists met with students. So people started really feeling it.”

In some schools, she said, co-locations also threw into relief racial segregation. “For example, in one of the schools in the West area, the public school was predominantly Black and the charter school was predominantly white,” she said. “And [the charter school] got all the nice space. Everything actually looked better for them than it did for the public school that didn’t have all the resources.”

Public schools accept all students. But charter schools are notorious for discriminatory enrollment practices and biases against special needs students and English language learners. In other words, they cherry-pick the students whose education won’t cost as much to provide.

“At my old school, right before testing, the special ed students would come back to our school because they would be kicked out by the charter schools,” said Mark Ramos, who now teaches at Franklin High School.

Ramos said charter schools in the district have expanded 287 percent since 2008. That means fewer students and less funding for public schools.

“Because of those real effects of charter schools, it has been easier for us to talk about the privatization question,” he said, “because we feel it every day.”

After the Union Power slate won leadership of the union in 2014, one of its new initiatives was to hire two staff organizers to work with parents and the community.

This was a controversial move, especially when public sector unions like UTLA were bracing for the possibility that a looming anti-union Supreme Court decision would shrink their membership and budgets.

“There were people who said, with Janus coming, ‘Hey, we’re going to lose money, we can’t afford parent and community organizers,’” said Roosevelt High School teacher Gillian Russom. “We fought for that. We said, ‘Without that, we will lose.’”

The parent and community organizers, together with teachers like Russom, developed a “What is privatization?” presentation and started taking it around to public schools that had or were about to have charters co-located.

“It really hadn’t been done before,” Russom said. “Parents had been engaged in how to fight off a charter at their school, but not in the bigger picture.”

The results were huge. “It’s really amazing how they’ve been able to break down this privatization process,” Griego said. “It makes it very accessible to parents.”

Anti-privatization parent groups emerged in one area of the city after another. They teamed up with teachers in fights that began to reach far beyond fighting a charter co-location at a single school. “But it started at those schools that were being co-located,” Griego said, “and I think experiencing the injustice of that is what at least opened people’s minds to this.”

“Part of the lesson is that parents are really interested in political education and understanding what is behind this,” Russom said. “‘Who are these rich people, who are these corporations that have this plan for my child’s school?’ Don’t underestimate the desire among parents and community to learn that stuff.

“And then those moms literally have completely run with it. They go school to school to organize other moms; they take on corporate groups in our city. It’s a beautiful thing to see that flowering.”

Quotes in this article are from Barbara Madeloni’s live interview with striking teachers. Watch the video here. Alexandra Bradbury also contributed to this article.