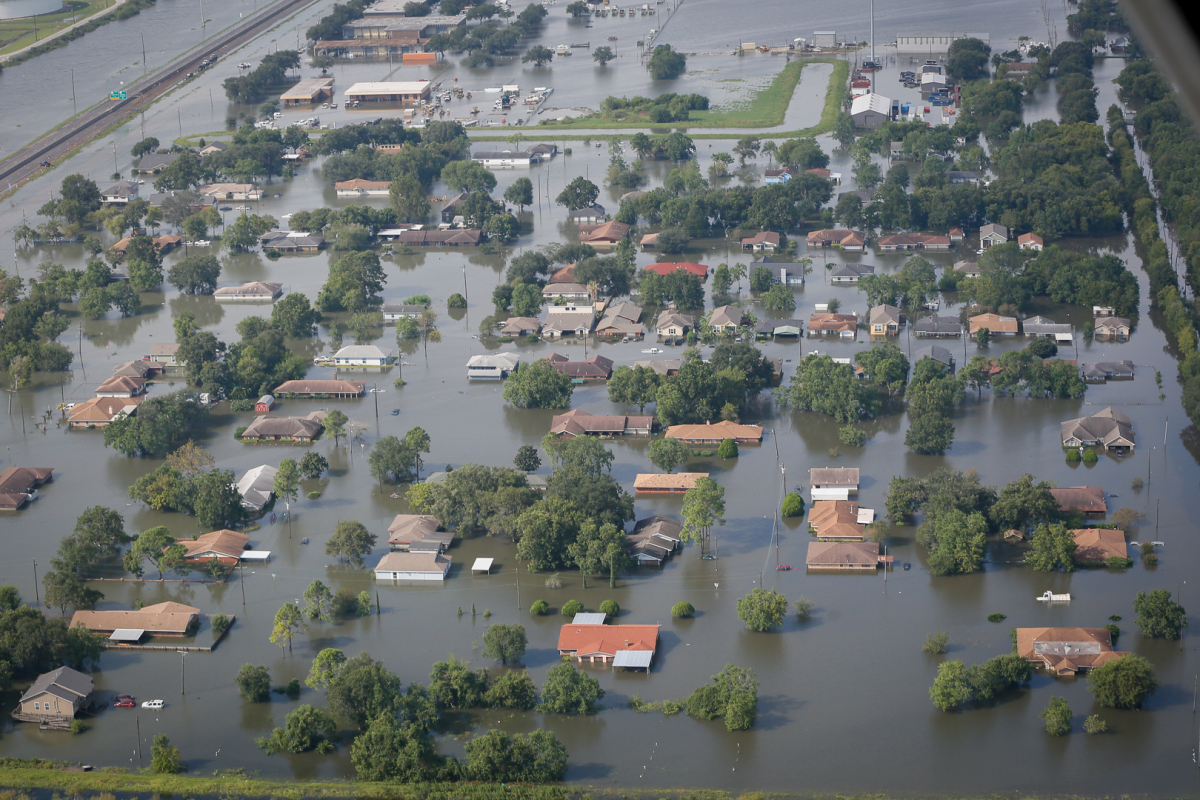 The hazards faced by residents of Texas, Florida, and Puerto Rico come not just from the flooding but from business interests eager to take advantage of the crisis to toss out rules and squeeze workers. Photo: SC National Guard

You have to hand it to Big Business and their minions: in every storm cloud they find a silver lining.

The hazards faced by residents of Texas and Florida (and now Puerto Rico) come not just from the flooding but from business interests eager to take advantage of the crisis to toss out the rules—“it’s an emergency”—and squeeze workers.

With Trump as president, companies are hoping for a permanent repeal.

The precedent is there. After Katrina, President Bush suspended Davis-Bacon for six months, allowing contractors to drastically lower their wages. When Davis-Bacon was reinstated, existing low-wage contracts were grandfathered in.

Bush also suspended OSHA’s enforcement of health and safety standards and had the EPA waive standards for emissions and fuel refineries.

Twelve years ago New Orleans saw a massive exodus of its population, many of whom never returned, both their houses and their jobs gone.

But employers took advantage of the crisis to pit workers against each other, driving wages down. Rather than pay living wages to draw back displaced residents to work the clean-up, contractors brought in guest workers on H-2B visas. Horror stories emerged about conditions for workers at shipyards and construction sites.

Indian workers paid $20,000 each to recruiters for Mississippi oil rigs, with the promise of permanent status in the U.S. They were relegated to labor camps and charged $1,000 a month to live 24 men to a room, guarded by security who threatened to deport anyone who protested.

Workers ended up winning $14 million after organizing and filing suit.

When 300 workers mostly from South America arrived to work at a local hotel chain—making less than the mostly African American employees had before Katrina hit—they were housed eight to a room in an unfinished mold-infested property.

After paying more than $3,000 in recruitment and travel fees, they saw their hours cut. They sued, too.

One study found 100,000 Latino workers travelled to the region for jobs related to the cleanup. Another informal survey found 60 percent of immigrant workers doing post-Katrina rebuilding were cheated out of pay for some of their work.

These examples of exploitation spurred reform to the H-2B visa program and the formation of worker centers in the region to help workers fight back.

Katrina was an opportunity for massive privatization, even with no logical connection to storm damage. The state of Louisiana fired all New Orleans teachers and school employees (the majority African American and women) and replaced all but four public schools with privately run charters.

New Orleans now has the highest percentage of students enrolled in privately run schools of any city, 93 percent. New teachers are younger and whiter than the veteran teachers they replaced (and mostly non-union).

If business has its way, workers will be on their own facing the hazards the storms will leave behind. In the oil and gas capital of the U.S., the explosion of the Arkema chemical plant is just the tip of the iceberg.

Texas doesn’t require worker’s compensation coverage and an estimated 40 percent of construction workers don’t have health insurance. With the anti-immigrant climate President Trump has fostered, undocumented workers will be even more fearful of speaking out against unsafe conditions.

While Americans hope for an “all hands on deck” spirit in helping dig out Gulf States residents, we should be wary of laying hopes of long-term recovery in the hands of business. We still need job protections and living wages. Shortcuts today may mean permanent damage.

Editor's note: This piece was written before Hurricane Maria's devastating strike on Puerto Rico, which will face the same issues but magnified by the island's declaration of bankruptcy in May. Even as Hurricane Irma, which hit the island far less hard than Maria, approached, Puerto Rico's governor and other officials said the predicted outages would make a good case for privatization of the public electric utility. Governor Ricardo Rossello told the New York Times that Irma “can become an opportunity or another liability.”