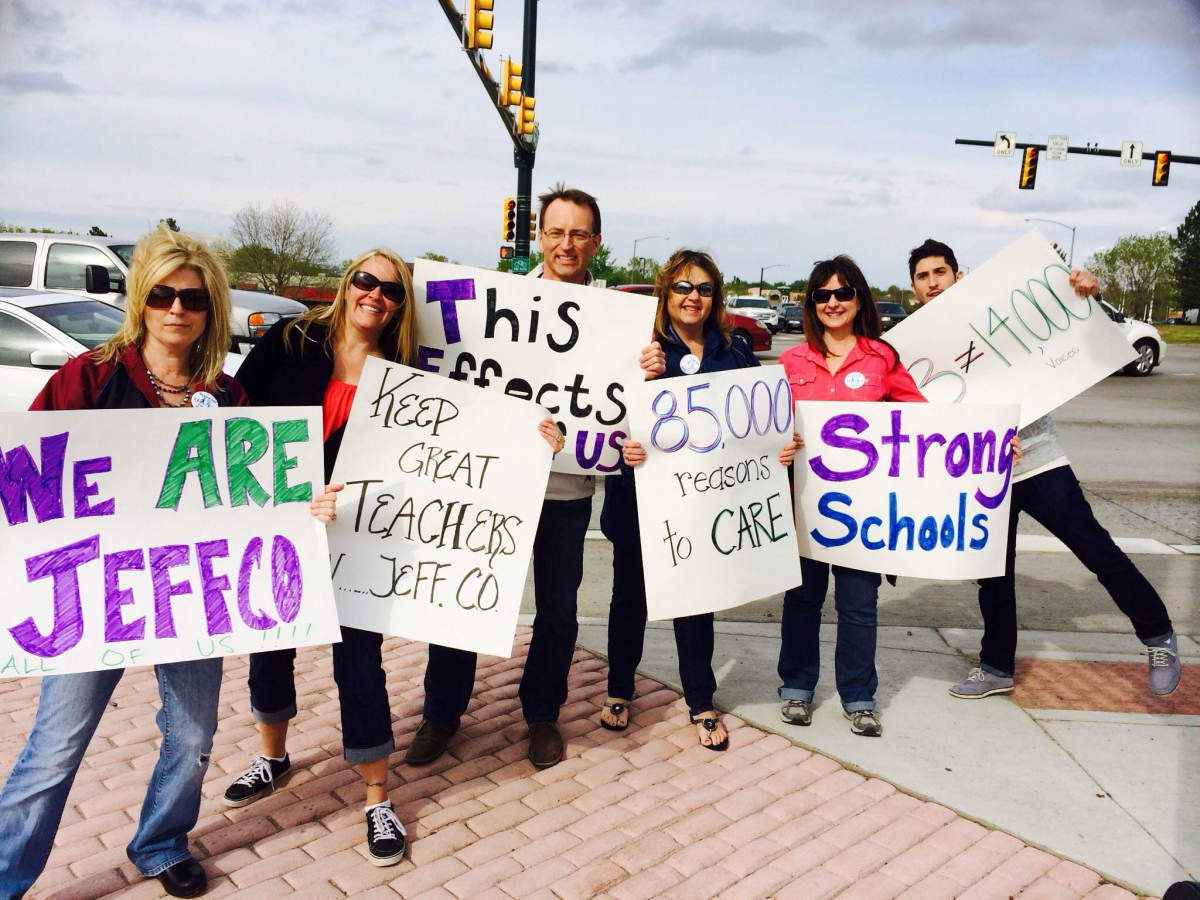 In Jefferson County, Colorado, a scrappy coalition of teachers and community allies took on three Tea Party incumbents on the school board—and beat them 2 to 1. Photo: JCEA.

When buckets of out-of-state money pour into a local election, that normally spells trouble for any working-class political program. But things were different this Election Day in Jefferson County, Colorado’s second-largest school district.

A scrappy coalition of teachers and community allies took on three Tea Party incumbents, backed by deep-pocketed education reformers and the notorious Koch brothers, who controlled the school board—and beat them 2 to 1.

It’s a sharp contrast with Wisconsin, where unions fell short in their two attempts to dislodge Governor Scott Walker, despite countless organizers and tens of millions of dollars from the national labor movement.

How did the Jeffco teachers union and its allies win what some called the most expensive school board race in history?

First, the teachers didn’t hide from the union label—they embraced it.

They weren’t afraid to offer a choice between right-wing billionaires and the union, even to voters who had elected a conservative school board in the first place.

Walker’s opponents would barely utter the word “union.” When they did, it looked like they were choking down a glass of sour milk.

POLARIZE WITH A VISION

They promoted an ambitious vision for the public schools, contrasting it with the slash-and-burn approach of a board majority that wanted to cut free kindergarten and bankroll charter schools.

They highlighted the board’s polarizing moves—cancelling a union contract, imposing an unpopular merit-pay scheme, and rewriting the district’s history curriculum to be more “patriotic.”

This attracted lots of parents and community members who were just as turned off by the board’s agenda as teachers were. And union leaders had the good sense to anchor the campaign in this coalition, rather than trying to control everything from union headquarters.

In Wisconsin, by contrast, centrist candidates and middle-of-the-road campaigns dampened enthusiasm. They failed to make the case why Walker should be ousted—even to union members.

This helps explain why 38 percent of union households voted for Walker in 2014.

But perhaps the most important lesson from Jeffco is the power of old-fashioned organizing.

The recall marked the culmination of a two-year transformation for the union. Like their counterparts in Chicago, Portland, St. Paul, and Los Angeles, Jeffco teachers stepped up their internal organizing in the face of attacks.

Over a year ago they started knocking on members’ doors and organizing house parties to talk about how to take on the board. They turned out 1,000 people to “boots on the boulevard” rallies. They built a network of school-site leaders—with a goal of one for every 10 members—who put thousands of their co-workers in motion, making sure everyone understood what was at stake in their contract fight and at the ballot box.

All this made the recall possible. You have to build the muscles to be able to use them. In the final six weeks of the campaign, one-quarter of the union’s members worked to get out the vote—helping the pro-recall coalition Jeffco United hit 100,000 doors.

As the Supreme Court’s Friedrichs case looms and public sector unions face the threat of “right to work,” this recall victory couldn’t come at a better time. What we have to do is simple—just not easy.

Mark Brenner is the former director of Labor Notes and is currently an instructor at the University of Oregon's Labor Education & Research Center.
Related
How Educators in Brookline, Massachusetts, Won an Illegal Strike »
Minneapolis Strikers Demand a Living Wage for the Lowest-Paid Educators »
Richmond Educators Are First In Virginia to Win Bargaining Rights »
Twin Cities Teachers and School Employees Gear Up for Strike »
As Omicron Rages, Teachers and Students Fight for Safety Measures in Chicago and Elsewhere »