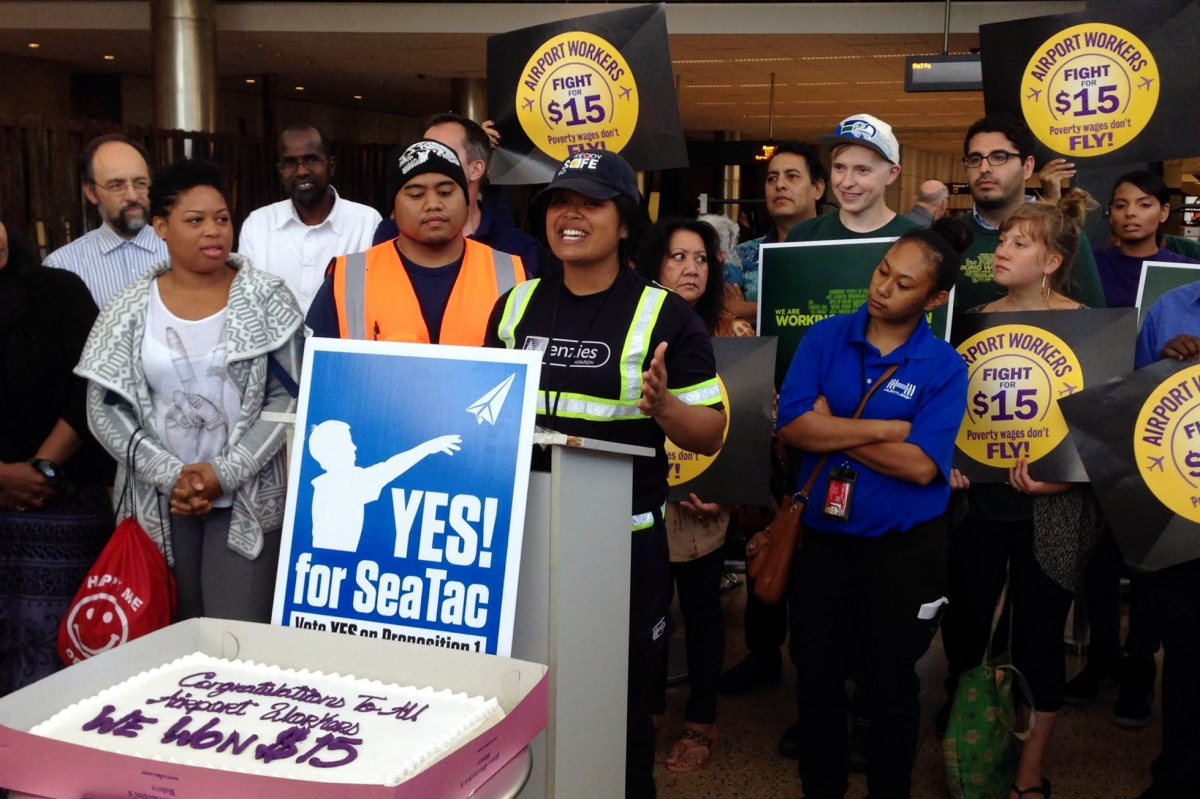 Alaska Airlines fought long and hard to block the $15 minimum wage for airport workers in SeaTac, Washington—but it has finally lost.

Washington’s state Supreme Court ruled 5-4 on August 20 that the ballot measure in the small city of SeaTac, where Seattle-Tacoma International Airport is located, is lawful and applies to airport workers too.

Voters approved a 2013 ballot initiative to raise the minimum wage to $15 for workers in the hospitality and travel industries. For workers at the hotels and restaurants that surround the airport, the raise took effect January 1, 2014, affecting an estimated 1,500.

But for the biggest group—those working at the airport itself—the change was held up by litigation. Alaska and its allies argued that, since the Port of Seattle runs the airport, the city didn’t have jurisdiction.

Meanwhile the movement for $15 took wing. Last year Seattle passed a citywide $15 minimum, to be phased in by 2021. San Francisco followed suit, and so did Los Angeles, first for hotels and then citywide. A New York commission has recommended a $15 statewide minimum for fast-food workers.

The $15 demand has caught on in union bargaining too, and the momentum has spread north of the border, including a push at the Toronto airport and a province-wide campaign in Ontario.

Back in SeaTac, airport workers and their allies kept the pressure on. Two workers, a reverend, and Seattle City Councilmember Kshama Sawant—a big backer of $15—were arrested last November in a protest outside Alaska Airlines headquarters.

Now the airport workers who kicked it all off will finally get their boost to $15.24. (The minimum is adjusted annually to keep pace with inflation.) The measure also guarantees paid sick time.

An estimated 4,700 airport workers will be affected, including those who fuel jets, move baggage, serve fast food, and staff rental car kiosks.

Half of Alaska Airlines’ flights go through SeaTac. The airline sued to keep the measure off the 2013 ballot, then spent substantially to urge a “no” vote. It was joined by employer associations for restaurants, hotels, and rental car companies, and even the oil tycoon Koch brothers.

But opponents were outspent and out-enthused by the “yes” campaign. Leading the charge were the Service Employees (SEIU) and the Teamsters, which represent workers at the airport in food, retail, and rental car workers and airport maintenance:

The working class town of SeaTac, with around 30,000 residents, saw intense canvassing by both sides. Many airport union workers threw themselves into the campaign, said [Sage] Wilson [of Working Washington, a coalition funded mostly by SEIU], registering their co-workers to vote and knocking on doors.

In fact, the crucial votes came from immigrant communities. The “yes” campaign won by just 77 votes—after registering more than 900 new voters, almost all new immigrants or the children of immigrants.

“Probably more than 200 were registered outside Friday prayers,” wrote organizer Jonathan Rosenblum. He credits the win to the relationships formed between the unions, community allies, and Muslim immigrant workers through a 2011 fight to defend Hertz rental car workers’ right to take short breaks for daily prayers:

For Muslims daily prayer is obligatory—it’s one of the five pillars of Islam. Ritual prayers last but a few minutes, hardly causing a blip in operations….

[After a prior fight,] Hertz management had agreed to accommodate the workers, treating prayer breaks like smoke or bathroom breaks: just take it and then come back to work. In bargaining with the Teamsters, they agreed that no clock-out was necessary. They even provided a spare room for prayer.

But when workers went to pray on the last Friday in September 2011, the manager told them to clock out. Shuttle driver Zainab Aweis recalled her manager standing with his arms extended, blocking workers who were trying to get into the prayer room. “If you guys pray, you go home,” he declared….

The workers appealed to their union, Teamsters Local 117. Given the anti-Muslim hysteria in this country, Teamsters leaders might just have responded with low-profile activities, like filing a grievance.

But instead, the Teamsters took a stand. They organized a multi-faith pray-in at the Hertz counter and invited the media. Muslims, Christians, and Jews joined union and community activists, praying while holding signs that read, “Respect me, respect my religion.” Union officers and the Hertz shop steward went on national news shows. They brought in lawyers….

Alexandra Bradbury is the editor of Labor Notes.al@labornotes.org
Related
As Omicron Rages, Teachers and Students Fight for Safety Measures in Chicago and Elsewhere »
Steward's Corner: Using Pressure to Settle Grievances »
UPS Drivers Stage a Walk-in to Defend a Fired Co-Worker »
Christmas On Strike: Warrior Met Miners Stick It Out »
Whatever Happened to 'Eight Hours for What You Will'? »