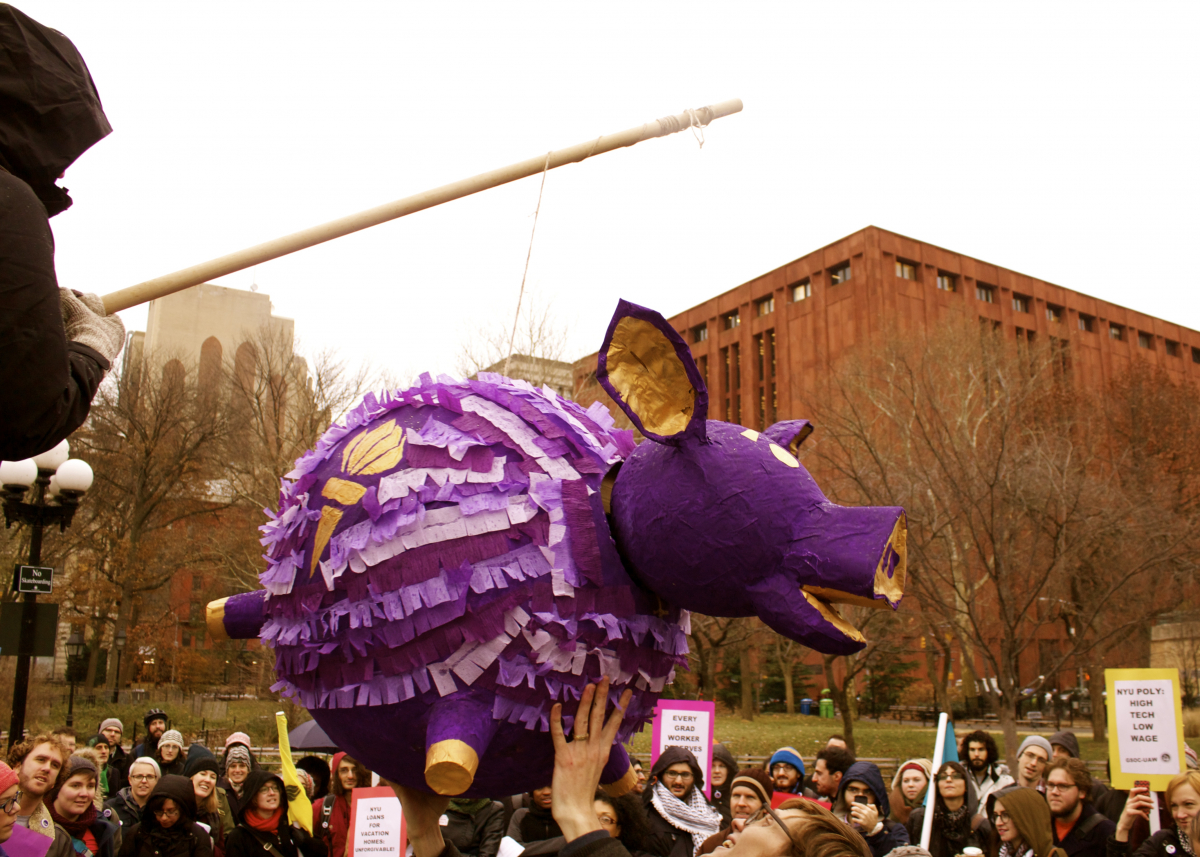 Teaching and research assistants at New York University are once again the only graduate workers at a U.S. private university with a union contract. Creative tactics, like this piggy-bank piñata, helped them win. Photo: Michael Gould-Wartofsky.

This week, teaching and research assistants at New York University again became the only graduate workers at a U.S. private university with a union contract. The contract includes major gains for all 1,200 members of GSOC-UAW Local 2110 in our unit.

It’s also a social justice contract, where the biggest raises go to the lowest paid and the largest increases in health and family benefits go to those who need them most. Master’s student workers will now make at least $15 an hour, up from $10. That’ll rise to $20 an hour by contract’s end. The university will pay 90 percent of health care premiums for hundreds of workers who until now had to pay on their own. And, for the first time, there will be funds to help pay for childcare and family health insurance, among other benefits.

The campaign to win this contract was led by the reform caucus NYU-Academic Workers for a Democratic Union (AWDU), which won a majority on the bargaining committee in September 2014. AWDU’s platform called for transparency in negotiations and for building strength through member participation. NYU-AWDU is part of a nationwide reform movement among grad student workers to democratize our parent union, the United Auto Workers.

Here are five tactics that helped us win a social justice contract.

1. Attacking the boss with humor and positive visuals. During the time members were voting to authorize a strike, we staged a participatory protest opera that featured a marching band and a piggy-bank piñata representing NYU's $399 million surplus. A blindfolded member first swung and failed to destroy the piñata. Three other members then removed the blindfold, and, to cheers of “smash the pig,” they collectively broke the piñata open. The point was that NYU could afford a decent contract—but breaking open its bank would require our collective effort.

2. Talking like a winner who’s having a good time. Just days before our March 10 strike deadline, our boss sent out a clumsy, defensive memorandum to the entire university characterizing our demands as unreasonable and greedy. In response, we had a teaching assistant grade the memo (it got an F). We circulated the image with the hashtag #nyusobroke. Meanwhile, our undergrad allies stormed the office of the provost who had written the memo. We always made sure we were the first to strut, and we strutted like a fun, lovable underdog.

3. Building relationships with community members, fellow workers, and—most important—those who pay the bills and those we directly serve. In our case, this meant undergraduates. Graduate workers’ teaching conditions are undergraduates' learning conditions, and like teachers and nurses and other care workers, some of our members were reluctant to strike, knowing that undergraduates might suffer.

We built alliances by establishing a coalition committee to do outreach—showing up at allies’ workshops, social events, and protests, and discussing how our struggles for a more democratic university fit together. In particular, we’ve worked closely with NYU’s Student Labor Action Movement, the fossil fuel-focused NYU Divest, Students for Justice in Palestine, NYU’s chapter of the International Socialist Organization, Law Students for Economic Justice, and a coalition fighting for labor rights at NYU’s Abu Dhabi campus.

Having strong support from students and making their actions protesting the administration visible online strengthened members’ confidence that we were doing the right thing for the whole workplace, both teachers and students.

4. Empowering members to lead. Going against the wishes of the UAW staff and reps assigned to our campaign, our caucus pushed for strong committees to support the bargaining team. This strategy built on our union’s earlier foundation of one-on-one organizing, but emphasized the many ways members could step up and lead. We ultimately established decentralized organizing, communication, and coalitions committees.

Keeping union activism sustainable for busy members was crucial. We wanted to avoid both backroom decision-making and the paralysis of endless, unfocused meetings. Member-led committees took initiative, while always reporting back and seeking continued support for their activities. When activists neared burn-out, others stepped up as we pushed for better meeting facilitation.

We also focused less on making every tiny decision slowly and meticulously in advance, and more on developing transparency and accountability as the campaign progressed. All together, we were able to be fast, flexible, and democratic at once.

5. Holding our ground. Our union administration asserted that “open bargaining,” with ordinary members invited to address the boss’s negotiators directly, was impractical and useless. Instead, it galvanized our membership and pressured management. As members and allies explained why we needed a strong contract, and how important grad workers are to undergrads’ experience, the university’s contemptuous responses enraged and energized us.

When we entered mediation, our officers and staff did not support having bargaining committee members at the table during all talks with the boss. AWDU leaders were accused of being “too agitational” and “elitist,” and “not understanding how it’s done.” But we held our ground and won the right to sit at the table.

On the night of our strike deadline, grad workers and undergrads held up colorful “on strike” flags each time university negotiators walked by. We made it painfully clear that we were ready to disrupt university operations.

Did our mobilization make a difference? On that final night of bargaining, the university entered the building with an offer that included 70 percent health coverage for those not already covered and nothing for childcare or dependent health care. By 1 a.m., the university had upped health coverage to 90 percent and conceded hundreds of thousands of dollars a year for childcare and dependent benefits, plus an improved offer on wages.

AWDU members are now working to make sure the unit’s bylaws help us to function democratically. This first social justice contract is just the beginning.

Daniel Aldana Cohen is a Sociology Ph.D. candidate, GSOC organizer, member of NYU-AWDU, and author of a recent essay in Jacobin on the link between cities, labor movements, and low-carbon leisure. Follow him at @aldatweets.

Natasha Raheja is an Anthropology Ph.D. candidate, GSOC bargaining committee member, member of NYU-AWDU, and director of the documentary Cast in India on the working lives of the men who make the manhole covers in New York City.

Related
Ballots Out in UAW Presidential Run-Off »
2022 in Review: Harsh Conditions, Good Surprises »
Viewpoints: How Academic Workers’ Leverage Can Grow in a Long-Haul Strike »
Challengers Win Big in UAW Elections; Presidency Headed to Run-Off »
Ballots Are Out in UAW Election, with Contrasting Visions of Unionism Up for Leadership »