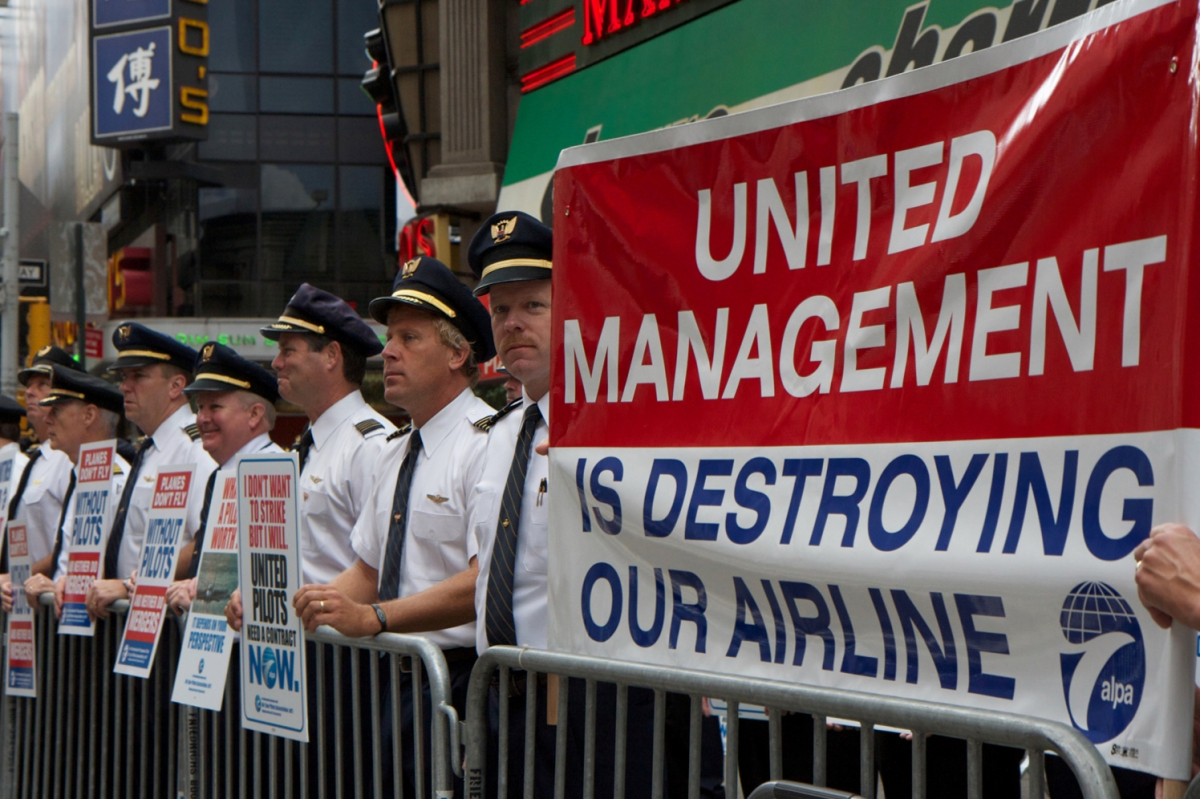 Pilots picketed in New York City in 2012 during contentious contract negotiations after United and Continental Airlines merged. Now they're reporting a pattern of “threats, intimidation, and outright bullying” against those who raise safety considerations that conflict with on-time performance or the flight schedule. Photo: Air Line Pilots Association.

A memo United Airlines leaked to the February 25 Wall Street Journal was presented as a “brutally honest” rebuke of its pilots, blaming their “lack of attention” to rules and regulations for the airline’s recent safety lapses.

But the public lashing looks like a diversionary move by United to head off criticism after a federal probe of the company has received much recent attention.

The carrier is accused of scheduling special flights for David Samson, former chair of the Port Authority of New York and New Jersey, himself under investigation for his role in the “Bridgegate” scandal (where New Jersey Governor Chris Christie and others allegedly engineered traffic jams to punish political enemies.)

If United realized it was offering flights “to curry favor with a public official, then United’s in the soup—it’s a bribe,” former federal prosecutor and Department of Transportation Inspector General Mary Schiavo told Bloomberg Business.

Whatever United’s motives, union officers from Chicago-based Council 12 of the Air Line Pilots Association (ALPA) were shocked, calling the letter “duplicitous” and even “offensive.” They fired back with a “brutally honest” safety examination of their own.

Council 12 officers see a pattern of “threats, intimidation, and outright bullying” against those who raise safety considerations that conflict with on-time performance or the flight schedule.

“In today’s culture, management uses safety as a weapon against us,” the pilots’ letter said. “We are threatened and intimidated when we make good sound judgments.” The letter was packed with specific examples.

Before the 2010 merger with Continental Airlines, safety discussions at United were traditionally handled through well-established channels of collaboration between management and union committees that involve pilots, mechanics, engineers, and ground employees.

Not this time. In the memo, United management chastised pilots for two aircraft that came “in close proximity to terrain” and another plane that landed with low fuel “after a deviation from a routing.” Pilots were treated to a condescending lecture, reminding them that “we are professional aviators with the common goal of flying our passengers and crew from point A to point B SAFELY.”

Council 12 officers consider the public callout an affront to the 12,000 United Airlines pilots who fly 5,055 flights a day to 373 airports across six continents.

They say it’s clear United's leaked memo wasn’t really intended for them. These admonishments were already delivered through an internal notice to pilots.

Perhaps the most outrageous assertion in management's memo is that “every pilot must be willing to speak up if safety is in question.” When they do speak up, Council 12 union leaders say, pilots are harassed.

For example, a whole flight crew was recently ordered to leave its aircraft because the captain was taking too long to cautiously accommodate a passenger who was suspected of being infected with Ebola.

Management’s assistant chief pilot, who was on the aircraft, gave an ultimatum: “go now, or get your belongings and leave the aircraft.” The whole crew was forced off the aircraft.

In another recent example, a captain who had less than 100 hours on the aircraft objected to being ordered to fly as a relief first officer. He said he didn’t feel safe flying.

The responses from United’s chief pilot were “your safety concern is not legitimate and I reject it,” and “you are putting your head in a noose if you don’t take the flight.”

In another case, a captain determined that an aircraft couldn’t be safely operated with a deferred-maintenance auxiliary power unit. This was an international flight, covering hostile terrain. The pilot asked for the unit to be repaired.

The O'Hare airport chief pilot called the ALPA pilot at his hotel room to berate him for that decision.

These and other examples of the company’s dismissive attitude provided by Council 12 leaders are well known to pilots. That’s why ALPA has consistently called for more extensive training based on “safety, the science of flight and the law” and for less pressure to adhere to “economics and schedule.”

In fact, the union has been raising these concerns to the National Transportation Safety Board, appearing before a Congressional hearing and appealing to the Federal Aviation Administration (FAA)—especially since the problematic merger of United and Continental Airlines when Continental management’s anti-union swagger first began to dominate the “New United Airlines.”

Continental’s top brass are heirs of the notoriously anti-employee Frank Lorenzo management style of the 1980s. Lorenzo and his successors ultimately bankrupted and destroyed the airline by mishandling assets, raiding the pensions and wages of employees, and provoking several strikes.

Lorenzo’s reign was so contentious that the Department of Transportation declared him unfit to operate an airline, a decision the U.S. Court of Appeals upheld in 1994.

As a result of this history, United’s new management team from Continental is far more inclined to act alone, without collaboration from those who could act as both partners and watchdogs—for example, the ALPA safety committee.

Now that United has fired the first shot by opening up a public discussion, pilots can begin informing the public too. It’s likely the dialogue will only increase support for pilots who stand up for our safety.

People will probably be even less tolerant of an airline that disregards pilot safety suggestions considered too costly, when they learn its CEO boasts to investors of doubling profits in 2014 and increasing the stock price from $3.17 in 2009 to $73.62 in 2015.

United also recently made clear that, despite the dramatic drop in fuel prices, there will be no reduction in fares, no elimination of added fees, and no additional frequencies scheduled to ease passenger complaints about crowded, stuffy cabins.

This combination shouldn’t win its executives any fans. As a result of disclosures by pilots and others, we can expect more public interest and expert scrutiny of flight safety.

To hear these reports about United Airlines “is very troubling,” John Goglia, a former member of the National Transportation Safety Board, told me in a phone interview. “And I have been communicating with employees from two other airlines who raise similar issues.”

For example, Goglia said, “a senior airline pilot was fired by Ryanair for raising safety concerns.” The airline is planning to sue him for defaming the company by raising these concerns on TV.

And it’s not only pilots who are raising the alarms. Southwest Airlines just settled a whistleblower lawsuit filed by a mechanic who alleged that he’d been disciplined for finding and reporting two cracks in the fuselage of a Boeing 737-700 while performing a routine maintenance check.

Fortunately, Goglia said, Southwest Airlines agreed “to remove the disciplinary action from the mechanic’s file and to pay him $35,000 in legal fees.”

Goglia, a respected authority on airline safety, believes the situation so serious that the Inspector General of the Department of Transportation should be looking into it. “I think it is beyond the ability for individual FAA inspectors to adequately investigate,” he said.

Carl Finamore is former president of Air Transport Employees Local Lodge 1781, International Association of Machinists and Aerospace Workers. He is a retired SFO baggage handler for United and a delegate to the San Francisco Labor Council. He can be reached at local1781[at]yahoo[dot]com.