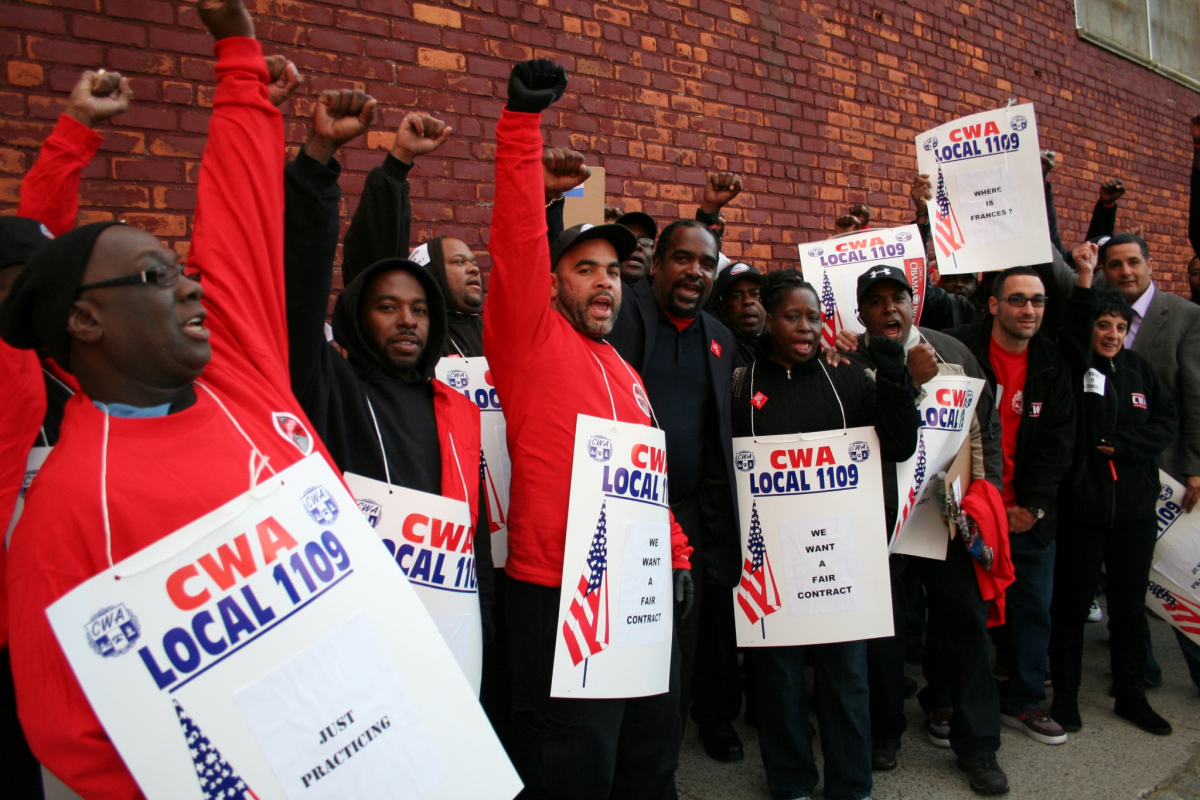 Three years after they voted to unionize, 262 technicians who install and repair television, phone, and Internet connections for Cablevision in Brooklyn, New York, have finally won their first union contract—and it’s a good one.

The two-year pact includes big raises—ranging from 7 to 30 percent—along with such union fundamentals as a grievance procedure and “just cause” protection.

“The most important part is that we’re no longer at-will employees,” said Clarence Adams, a 15-year tech. “To have that hanging over your head, it’s not helpful to anyone.”

Adams knows what he’s talking about. He was one of 22 the company fired in 2013 for trying to speak to a vice president about their stalled contract negotiations. It took two months of demonstrations and community pressure to win their jobs back.

In a testament to the power of organizing, a few hundred workers in Brooklyn voting to unionize was all it took to win big raises for the company’s 15,000 nonunion workers in New York, New Jersey, and Connecticut.

When Cablevision workers in the Bronx threatened to follow Brooklyn’s lead with their own union vote, CEO James Dolan acted quickly to squelch the drive. In 2012 he handed out raises of up to 20 percent, between $2 and $9 an hour, to all the company’s employees—except those in Brooklyn.

That was no oversight. Dolan told the Bronx workers that Brooklyn would be punished.

But now at last, similar raises will apply to the workers who fought so hard to win them: the Brooklyn techs. The contract places workers on the scale by comparing their positions and longevity to their counterparts outside the borough, bringing them up to 96 percent parity. They’ll also get the same health and 401(k) pension benefits as Cablevision workers elsewhere.

Adams said the biggest raises won’t be for long-timers like him—he was already making $28—but for newer hires, especially those who’ve put in between three and eight years at Cablevision.

“We realized how much it would mean to the guys coming up… the guys making $12.98,” he said. “They’ll get a higher return in the next two years than [they did] in their first seven years with the company. It’s awesome to see that these guys are going to get justice.”

When Cablevision workers started organizing in 2011 it was their fourth effort. They were inspired, in part, by the Verizon strike; Cablevision techs were making only half as much as unionized Verizon techs in the same city.

From the beginning they established a culture of accountability that served them well through the long fight. Workers began the drive on their own steam, then walked into the CWA office carrying 100 signed authorization cards—an unusually promising start.

But organizers, who knew the techs were in for a bruising fight, asked them to start over with a new card, this one asking for a deeper commitment.

“I will not sit back while my co-workers on the Organizing Committee stand up for a union on my behalf,” it read. “They have my back—I have their back.” Workers were invited to check a box agreeing to make their names public as soon as the union reached majority support.

In the lead-up to their election, as they endured the tactics of a union-busting firm, workers showed each other they were holding strong by wearing red “CWA Solidarity” wristbands and standing up to management in captive-audience meetings.

When the company tried firing Jerome Thompson, a main leader of the drive, 200 co-workers put on a “Jerome” sticker. Forty stewards jammed into the vice president’s office, demanding Thompson’s job back.

He was rehired with back pay the next day. The boss called it a misunderstanding.

Stain on the Brand

Most of the Brooklyn techs are black, and racial justice became a theme in their campaign.

Last fall the company fired Thompson again, this time for comments about slavery made in an internal meeting about the company’s Optimum brand. (He said Cablevision’s unionbusting stains its brand, the way slavery stains America’s past.)

Several of the workers fired in 2013 formed a rap group, The Tech-22, penning songs like “Dear Mr. Dolan (Where the Papers At?)” that helped draw public attention to their fight. They performed and received a Troublemakers Award on behalf of their co-workers at the 2014 Labor Notes Conference.

As the company dragged its heels in bargaining, union allies turned up the heat. City councilors initiated a process to challenge the lucrative tax exemption of Madison Square Garden, another arm of Dolan’s empire. That challenge is going forward despite the contract settlement.

And despite a high-dollar legal team, the company kept losing its legal battles with the union. The Labor Board has issued a series of complaints against the company for bad bargaining, spying, harassing, intimidating, bribing, and firing. In December a federal administrative law judge ruled against Cablevision for some of the charges; others are still pending.

Reportedly the city’s department of information technology was looking into finding the company in violation of its cable franchise, which requires compliance with federal labor law.

’The Name of the Game’

But it’s not clear what brought Cablevision to the table. Perhaps Dolan was simply, finally disheartened by the workers’ dogged refusal to give up.

In October the company commissioned a dodgy private poll in an effort to show workers were losing faith.

It even tried sponsoring an anti-union rally, which backfired: hundreds of red-shirted union supporters turned out, and only a handful of opponents.

“Everything is a struggle and effort. That’s just the name of the game,” tech Eric Ocasio told me two years ago, as a few activists waited by the fence at the Canarsie garage, braving a 14-degree morning to hand out “Workers Rights = Human Rights” T-shirts to their co-workers.

“Once they realize there’s no way the union is going to leave, they’ll have to settle down and agree to a contract with us,” Ocasio said.