On the Beaches of Santa Monica, Temp Workers Organize 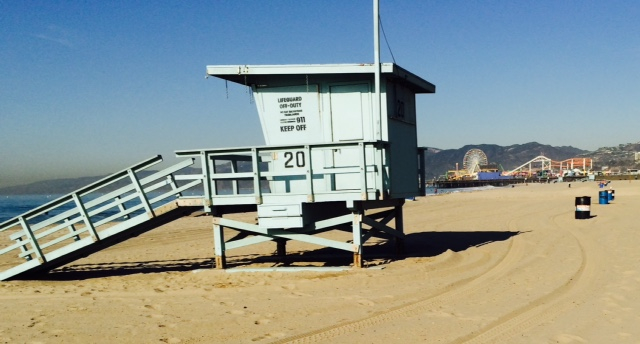 Even public employers are dipping their toes into the "permatemp" economy. Workers designated "trainees" clean Santa Monica bathrooms and lifeguard stations, earning half of what permanent workers earn for the same job. One has been a trainee for almost 30 years. Photo: Marcy Winograd.

But the workers who maintain the city are hired on an as-needed basis, earning poverty-level wages, lacking benefits and the ability to form a union.

I am one of them. I’ve been employed as a temporary employee in beach bathroom maintenance for four years. I struggle to earn a living and hold an extra job so I can earn enough money to survive.

The recession hurt many families in Los Angeles, including mine. My mother moved in with me when my family’s house was lost to a foreclosure. She had nowhere else to go, so I found a home big enough for all of us.

As the eldest child in my family, I support my mother and two younger siblings, but I can barely afford to pay the bills from the $2,000 monthly income I earn. Rent and utilities are $2,200 a month, groceries another $600-700.

Though we do the same work, my coworkers and I earn half of what workers with permanent status earn. There are 10 of us temporary workers, called “labor trainees” although we’ve never received formal training from the city.

Some of us have been in this state of limbo for almost 30 years and were never offered a permanent job. We've also taken the civil service exam and passed, but this still didn’t result in a permanent job offer either.

A color line divides the temporary from the permanent workers in Santa Monica. All of us temps are people of color—five of us are Latino and five Black. Our counterparts who are classified as permanent employees of the city, enjoying health insurance and pension benefits, are mostly white.

The problem isn’t only concentrated in the Santa Monica beach, of course. There’s a whole new “permatemp” section of the economy, including workers like us who have been made into “as-needed” casual workers while still being directly hired, and workers who are outsourced to staffing agencies.

According to a recent report from the National Employment Law Project and the National Staffing Workers Alliance, the number of workers in that second category of outsourced workers “has reached an all-time high”: “2.8 million Americans are currently employed in temporary help services, which constitute the majority of staffing industry jobs.”

For employers these are strategies to dodge unions, benefits, and labor laws. The National Labor Relations Board has gone back and forth over the years on whether temporary employees or contracted workers can form a bargaining unit. (Most of this is fought out in court cases. To read more, check out the Seattle-based Center for a Changing Workforce.)

The public sector used to be a conduit to middle-class, union jobs for many Black and brown people. But state and local governments are increasing employment of permatemps like me.

The use of temporary workers has increased since the recession, as city budgets have been slashed. “Public-sector agencies are increasingly trying to minimize their obligations to workers by staffing through temp agencies—even for long-term jobs—and outsourcing to private contractors,” said Chris Tilly, Director of the UCLA Institute for Research on Labor and Employment.

We have a chance to stop the growing problem of the permatemp economy here in Santa Monica. If we don’t, I’m afraid that the city will take the next step and start outsourcing more jobs to third-party contractors.

To bring fairness to its beaches, Santa Monica needs to make all of us permanent workers. If we had permanent status, I might be able to support my family on one job—rather than juggling two and working 80 hours a week.

My co-workers would be able to get proper medical care instead of having to come in to work sick or with dangerous infections. We might feel more like dignified workers instead of expendable labor.

Last year my co-workers and I joined the Industrial Workers of the World and began organizing for change.

Now we are close to making that first step. This Tuesday, the Santa Monica City Council will discuss the status of its permatemp workers. We invite everyone to come join us and support our demands for dignity and justice at work.

Shyolanda Montana is employed as an as-needed labor trainee for the city of Santa Monica since May 2011. She wrote this article with the support of Yvonne Yen Liu and Morgan Presta (a pseudonym), both members of Los Angeles Industrial Workers of the World.