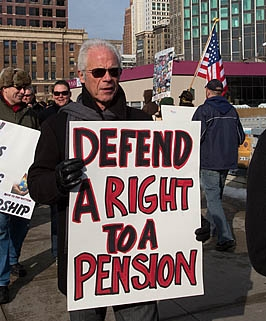 There are plenty of setbacks for working people, and benefits for the rich and corporations, in the $1.1 trillion appropriations bill just passed by Congress.

But what it does to pension protections is appalling.

A hardly-publicized piece of the package concern "reforms" dedicated to saving multi-employer defined benefit pension plans from failing. The chief mechanism for "saving" these plans turns out to be allowing them to cut benefits for already existing retirees.

Union members from electricians to Teamsters to hotel workers to grocery workers rely on these plans. There are 1,400 multi-employer pension plans, with about 10 million participants.

This is the first time current retiree benefits can be cut since the passage of the Employee Retirement Income Savings Act (ERISA) in 1974.

The legislation is the latest in a decades long attack on defined-benefit pensions, which are plans that guarantee workers a definite pension figure when they retire.

Here is a brief description of the "reforms" from the Pension Rights Center:

In 2006 Congress passed the "Pension Protection Act" in the guise of saving single-employer defined benefit pension plans (DB plans). It made massive changes in the ways companies had to fund them, drastically increasing the cost of funding pension plans. This spurred on corporations who wanted to terminate their DB plans and replace them with 401(k) type plans. There are currently 42,000 DB plans with 29 million members.

401(k)s are "Defined Contribution Plans," meaning all that is guaranteed is the amount the employer puts into the plan. If the stock market crashes and workers lose money in their pensions, the employer is not obligated to make up the losses. Compare that to a defined benefit plan where the benefit amount is guaranteed.

These two organizations set mandatory accounting standards for pension plans in both private sector and governments. For example, when GASB issued a ruling that municipalities had to consider any money owed to public sector pensions as a liability, many cities went from having a balanced budget to appearing to be mired in millions of dollars of debt. Cities with large debt receive lower credit ratings, and then have to borrow money at higher interest rates, thus curbing services. The solution for many elected officials has been to cut public worker pensions.

While we have come to expect Republicans and many Democrats to attack pensions, we in the labor movement have been divided on defending pensions. In 2006, unions that had multi-employer pension plans, like the building trades, SEIU, and UFCW, supported the legislation because it focused its attack only on single-employer pension plans. Other unions, like the UAW, endorsed the PPA because they believed they had won some concessions during negotiations on the bill. Still other unions got "carve-outs" added to the legislation, which exempted their employers' pension plans from the changes, or delayed them.

This year we see some unions with multi-employer pension plans are supporting the effort to reduce retirees' benefits, based upon the theory that "small cuts to workers now are better then big cuts later on." Among the union leaders on record as supporting the new legislation are Sean McGarvey, president, North America's Building Trades Unions; Anthony "Marc" Perrone, secretary-treasurer, United Food and Commercial Workers, and Edwin D. Hill, president, International Brotherhood of Electrical Workers.

The majority of unions, including the Machinists and Steelworkers, opposed the bill.

Where Do We Go from Here?

Less then half of workers in America have any kind of pension plan at all. Fifty percent of workers have less then $10,000 dollars in savings. Social Security, under attack itself, covers only about 40 percent of what a person needs to retire on.

We can and should continue to fight to save the pensions we already have, but so far this has been done in a very parochial fashion, each union fighting to protect what they have, ignoring the rest. This
go-it-alone fight has led to defeat after defeat for union pensions, and this tactic clearly has no effect on the majority of workers who have no pension at all.

Our pension fight must become a fight for a national retirement program, a fight to make Social Security into a system that provides for full retirement for all workers. We need a system that is not directly tied to the whims and ups and downs of corporations and capitalism. We need to launch a fight for a better future that includes our union members and millions of non-union workers.

David Cohen is a retired international rep for the United Electrical Workers (UE).

Related
Viewpoint: UNITE HERE International Should Keep Its Hands Off Local 2’s Pension Fund »
St. Louis Boeing Plant Workers to Strike »
Review: How Workers Can Safeguard Pensions »
Open Bargaining Brings the Power of Members to the Table in Berkeley »
Get Fossil Fuels Out of Our Pension, Say Environmental Protection Workers »