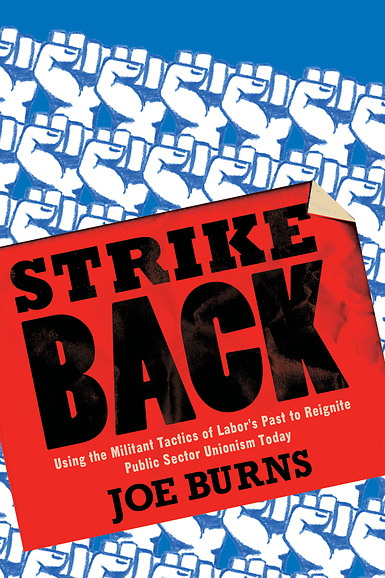 Joe Burns’ latest book examines the little-known wave of wildcat strikes that swept the U.S. (and the world) during the 1960 and ’70s, reshaping the labor movement.

In his previous book, Reviving the Strike, Burns, a former AFSCME negotiator and labor lawyer, made an argument that unions ignore at our peril: we won’t recover our power until we challenge unjust labor laws, abandon unconditional support for the Democrats, and embrace self-organization and the strike.

His extremely accessible new book, Strike Back, shows how unionists did exactly that, right here and not so long ago. From the mid-1950s to the mid-’70s, the number of public workers who belonged to unions grew tenfold, reaching 40 percent of all U.S. public employees.

It was small groups of militant workers who made this explosive growth possible—by defying the law and their union leaders (if they even had a union) to go out on unsanctioned strikes.

THEY JOINED IN DROVES

The changes were quite dramatic. For example, Burns reports, in just over a decade teacher unions went “from a negligible part of the labor movement to among its largest and most powerful organizations.” By the ’70s about 70 percent of all teachers were unionized.

The book is loaded with compelling histories, from the most unlikely places and workplaces. Teachers in Utah and New York, sanitation workers in Memphis, and police in New Orleans and Philadelphia not only risked losing their jobs. They also risked being imprisoned for ignoring court injunctions to return to work, and being banned from ever working in their fields again.

Workers who struck in one agency or department—Florida teachers, for instance—would spark the imaginations of others across their state and the country. After laying the groundwork over years of minority-union organizing, an ungovernable force of workers would flash out and shut down a city: Oklahoma City, for instance.

The take-home lesson is straightforward, persuasive, and impossible to ignore. “It is not conceivable that the labor movement will be revived in any meaningful way,” Burns writes, “without workers violating labor law, as their counterparts half a century ago did.”

STRIKES GOT THE GOODS

Beginning in local workplace committees with a handful of members, often without union representation or a contract, public workers organized around the problems and threats facing their co-workers.

Some developed new tactics to force local, state, and federal governments to respond with either the carrot or the stick, such as during the high profile 1960s New York City teachers’ strikes.

Once they’d built enough support both inside and outside their workplaces, even unsympathetic elected officials would be forced to respond with conciliation, rather than arrests or firings.

Recounting the meteoric rise of PATCO, the air traffic controllers union, Burns concludes that “it was power, not membership numbers, that initially made these unions attractive to other workers, and allowed them to eventually grow into large, national organizations.”

Once they’d proved their mettle, these activists would run for union office. Burns tells how militant members changed the direction of many conservative, Democratic Party-allied unions. One example is the Chicago Teachers Union, which held frequent strikes until the 1980s.

Burns articulates the analogy between those days and today so succinctly and simply that it’s a wonder few have done so before.

Before the strike wave, the 1960s looked bleak. Public workers faced bans on collective bargaining and striking. They either had conservative union leaders or no unions at all.

As labor arbitrator Arnold Zach put it, the vast gains came about because “the power to strike was of far greater importance than the right to strike.”

So rather than be cowed by the repressive legal environment workers now face, Burns argues, we need to confront it head on, to force a crisis.

We should start by carefully studying the new composition of employer power to identify our strongest allies and employers’ weakest links, in order to devise new tactics and organizational forms.

And we must draw more co-workers into our efforts by starting with small fights, winning victories, and escalating to embrace strikes. The goal is not merely to fight back, but to shift the balance of power.

While Burns occasionally refers to the 1930s, he overlooks another analogous period. From the 1880s to 1910s, workers engaged in similarly widespread self-organizing—confronting their own craft unions, the giant industrial trusts, and judicial, police, and military forces.

Their spasmodic eruptions created enough disruption to provoke what today we call the Populist and Progressive Eras. That’s when we got the reforms that banned child labor, created early minimum wages and pensions, temporarily legalized private sector unions and collective bargaining in the midst of World War I, improved public health, and created universal public education and libraries.

None of these reforms would have happened if not for the radical farmers, immigrant anarchists, and socialists who injected their strategies and ideas into the AFL and the Industrial Workers of the World, both of which struck key war industries during WWI.

Overlooking this earlier period illustrates the book’s limited theoretical depth. Burns takes the position that changes in the organization of production, and employers’ attacks on workers’ gains and power, sparked new waves of militancy. For example, the introduction and expansion of Taylorism and the assembly line provoked the sit-down strikes of the 1930s.

But the truth is, it was the other way around. In the so-called Progressive Era, as Bruno Ramirez illustrated in When Workers Fight, and in the Great Depression, as Martin Glaberman showed in “Union Committeemen and Wildcat Strikes,” employers responded to skilled workers’ control over the labor process by deskilling and rationalizing their work, and to unskilled workers’ self-organizing by accepting temporary collective bargaining with the craft unions. The point was to divide and conquer.

This restored peace to the shop floor and raised productivity, in exchange for higher wages, from the 1920s until the next wave in the early ’30s. In effect, collective bargaining and contracts weren’t forced on employers. Business embraced the legalized union as a tool for disciplining defiant workers.

It’s no wonder that some of the greatest periods of economic expansion followed the Progressive and especially the New Deal reforms, which sought to rein in working-class militancy and coopt unions into promoting profits.

Despite these limitations, Burns’ book is an irresistible guide to tipping the balance back in our favor. It should spark debate everywhere.

Clinging to our rapidly shrinking spheres of power, the labor movement tends to fall back on limited issues of wages and hours, ignoring the broader possibilities of what Burns calls social unionism, in which workers address how our work affects those we serve. A reinvigorated workers’ movement could take us a long way toward solving our most pressing problems: environmental collapse, growing wealth and power gaps, and endless war.

The first step is to solve the problem of eroding union power—and that requires taking risks.

Robert Ovetz is a migrant “mindworker” of academia in Northern California. He works full-time by piecing together part-time teaching jobs in academia where tenure is going extinct. Robert belongs to five different unions in three institutions.

Related
Review: Don’t Bleed in the Shark Pool »
Review: Learning from an Older Generation of Troublemakers »
Viewpoints: How Academic Workers’ Leverage Can Grow in a Long-Haul Strike »
Collectively Fabulous »
A Life in Transit: ‘What You Can Get Is Set by How Far You Are Prepared to Go’ »