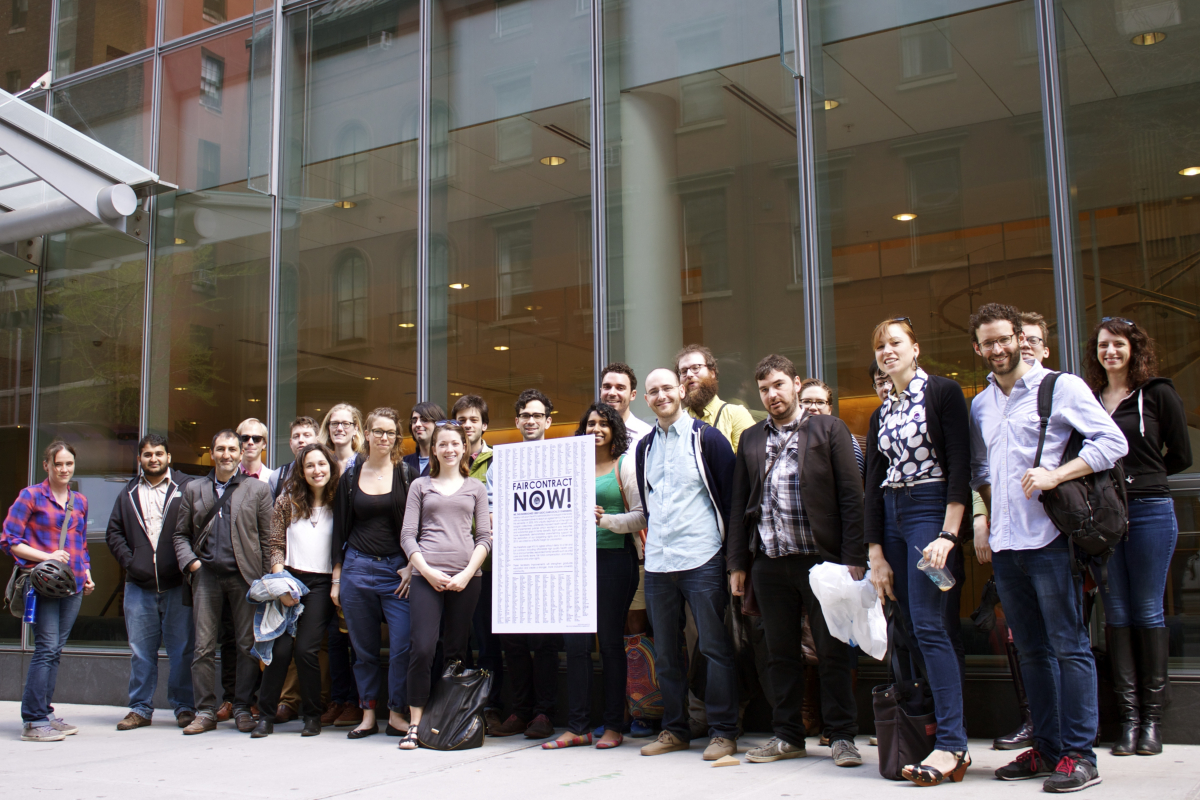 Grad student workers at New York University are poised to regain a union contract, making them unique in the private sector. But will their new union be as democratic and social-justice-minded as its counterparts at public universities in California and Massachusetts? Photo: Michael Gould-Wartofsky.

New York University graduate student workers are poised to again become the only private sector student workers with a union contract in the U.S. But members of the elected bargaining committee are speaking out against the union’s settlement strategy.

In a July letter, three of us bargaining committee members called for a more member-led campaign so that we can win a stronger contract. A hundred rank and filers have signed on to a letter of support.

Stopped by Labor Board

We won a first contract in 2001, but NYU refused to bargain a second one after the National Labor Relations Board ruled that private-sector graduate student workers weren’t really workers. We fought for eight more years while the Labor Board sat on its hands.

In return for withdrawing the union’s petition before the Labor Board, the university finally relented last year, agreeing to neutrality and to an election to reauthorize the union. We won with 98 percent and now represent 1,200 graduate employees.

But what direction will our new union take? Thus far, our union’s leadership has chosen expediency over engaging members. The UAW staff and representatives assigned to assist us in our negotiations did not support the formation of a contract committee—or even the revival of our union organizing committee, which had been dismantled and selectively reconfigured before our neutrality talks and union election.

“When I and other graduate students tried to organize a committee to support bargaining, UAW staff discouraged us from holding a public meeting,” said Darach Miller, a PhD student in biology.

Their argument was that the committees would exclude members who don’t have time to attend meetings, and therefore would be unrepresentative.

Our UAW staff and representatives also did not support members wanting to plan creative actions such as library work-ins and health center sick-ins to demonstrate our power and expand the visibility of our contract campaign, citing that collective actions might send management the wrong message and expose weakness.

When rank and filers tried organizing members who were parents, or international students, into special interest groups, these efforts were labeled as unofficial and agenda-ridden. When members proposed strategically using the contract campaign to foreground issues of class size—arguing that it is a workload and quality of undergraduate education issue—they were dismissed as derailing the process of winning basic material needs.

This narrow focus has meant the union hasn’t fostered the cross-department and member-member connections that are integral to building our union’s power during the crucial first seven months of our contract campaign.

In our January bargaining committee election, questions of strategy were obscured by sexist attacks. One woman of color stood as an independent candidate against a handpicked UAW-affiliated slate. UAW staff members admitted that “it didn’t look good to run against her” but dismissed her as a pawn of an “ultra-leftist union takeover agenda,” and dismissed women’s support for her as being motivated by romantic interests.

After all this, we’ve been left with a weak contract offer, which was finally proffered by NYU just as our spring session was coming to a close.

Compare this to the recent contract win at the University of California. Under the reform leadership of Academic Workers for a Democratic Union (AWDU), the student worker union UAW 2865 ran a member-led, ground-up pressure campaign—and won 5 percent raises in the first year, higher percentage increases than prior union administrations had ever achieved through closed-door negotiations.

Through the activism of a lively Anti-Oppression Committee they also won gains for members who are transgender, undocumented, or parents, including gender-neutral bathrooms, boosts to childcare subsidies, and lactation stations for nursing mothers.

I am confident that our demands do not compromise our unity as student workers trying to wrest material gains from NYU.

Recent internal union debates are not reducible to “infighting,” says sociology PhD student Nantina Vgontzas, “but rather part of the work that goes into building the union that we want.”

In fact, Vgontzas argues, “Reckoning with these criticisms publicly indicates both to the membership and to management that together we’re thinking through all the options at our disposal to place as much pressure on NYU as we can.”

The vibrant mobilizations and victories of our sister unions in California and in Massachusetts are products of their shared commitments to social movement unionism— meaning they aim to build the power of the rank and file and organize around the intersections of civil rights and labor issues.

And we have their support in raising concerns about democracy within our own union. Anna Waltman, co-chair of GEO-UAW at the University of Massachusetts, urges members “not to view this cynically as an ideological schism or attack on the union, but rather as an opportunity to engage in a necessary dialogue about what bargaining should look like and how to build a successful campaign.”

In the fall we expect to have an election to fill bargaining committee vacancies, and we’re hoping to make it an opportunity for members to grapple with union strategy. Members should not be excluded from the committee based on accusations of radical left politics or membership in political organizations.

While the UAW organized a slate of approved candidates to run against independent candidates in the last bargaining committee elections, it is our hope that during the coming election they will see the advantage in working with active members even if they differ on strategy or tactics.

As the first unionized graduate student workers at a private university in the United States, we at NYU have the opportunity to create a model, good or bad. A member-led contract victory will reverberate across the academic labor movement.

Natasha Raheja is a third-year PhD student in anthropology at New York University and a bargaining committee member of GSOC-UAW.

Related
Ballots Out in UAW Presidential Run-Off »
What Today's Union Reformers Can Learn from Miners for Democracy »
Viewpoint: What Message Does a ‘Vote No’ Campaign Send? »
Management Rights: A Pitfall When Negotiating Your First Contract »
2022 in Review: Harsh Conditions, Good Surprises »