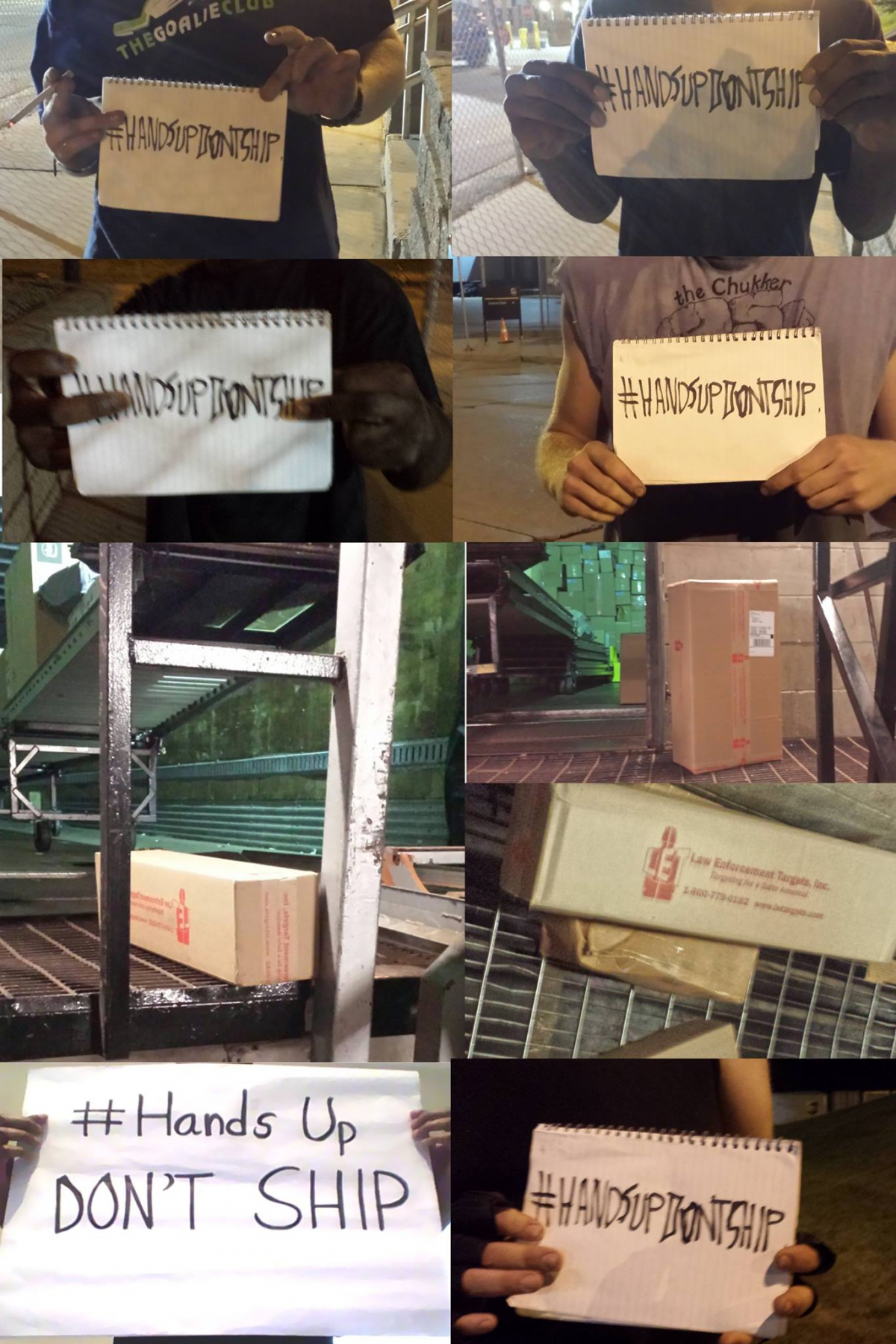 A dozen part-time UPS workers took protest action after discovering ties between Missouri law enforcement and a company whose shipments they handle each day.

A dozen part-time UPS workers in Minneapolis took protest action on the job August 22, after discovering ties between Missouri law enforcement and a company, Law Enforcement Targets, whose shipments we handle each day.

Some of us removed the company’s packages from trucks that would deliver them to law enforcement. Others, in solidarity, refused to ferry these packages to their intended trailers.

Others posed with a sign reading “#handsupdontship.” The phrase “hands up, don’t shoot” has come to symbolize protest over the police shooting of Michael Brown, an unarmed, black 18-year-old in Ferguson, Missouri.

We decided we could not be silent while our work was contributing to the militarized violence that police are directing at Ferguson residents in the aftermath of Brown’s death.

Two examples of the products Law Enforcement Targets sells: images for police to practice shooting at.

Law Enforcement Targets is based in Blaine, Minnesota. The company produces cardboard, steel, and plastic shooting-range targets. Some feature photos of people for police to practice shooting at.

It still offers an “Urban Street Violence” line that’s predictably messed-up, and a “Missouri” line designed with the Kansas City police. (See photos.) These targets are designed to train cops to shoot first and ask questions later, to view everyone as a threat.

All this is shipped through the UPS sorting facility in Minneapolis, which ships several hundred thousand packages each day. Several hundred low-wage, part-time employees do all the sorting work, which includes unloading incoming trucks, sorting packages based on their destinations, and placing them in their intended trailers.

“If you’ve got the cash, UPS will ship it,” said one worker who was involved in organizing the action on his section, “even if it’s part of this f***ed-up system that winds up with a kid getting executed by cops and then this military invasion of the town where it happened.

"Give them the check and they couldn’t care less. Well, we care.”

Although people in various jobs and work areas took part, the action was symbolic. No packages wound up being halted. We wanted to make a convincing point to other workers while not exposing ourselves to an excessive risk of disciplinary action.

Management hasn’t responded, and may not even have understood that this was done in a concerted way. This is a large facility, and it’s possible supervisors on opposite ends of the building thought this was just one or two workers on their sections.

But we hope this action is just the first step. We shouldn’t have to go into work and support the murder of any more black youth, just because UPS makes a buck off of it. We believe it’s important to find ways of refusing.

The action has already been replicated by other workers in other parts of the building. As soon as we started talking to people, it became clear many were interested in finding ways to take a stand on the shop floor, on this and other issues.

We encourage workers elsewhere, especially at UPS, to think about how their labor contributes to the situation in Ferguson, and what we can do together to stand against it. And we want to help you make it happen.

Flintheart Glomgold and Launchpad McQuack are the obvious pseudonyms of part-time UPS workers in Minneapolis. We’re part of the group ScrewUps, a rank-and-file newsletter for employees of UPS sorting hubs. To find out more or get involved in similar actions, or if you have an idea of how to take a stand but need help, please contact us at screwups[at]riseup[dot]net.

For more on the protests in Missouri, see ‘Mike Brown Is Our Son’ and Ferguson: A String of Betrayals.

Related
Communications Workers Fight Telecom Giant for MLK Day Off »
It's Been a Long Nightmare Before Christmas for UPS and Postal Workers »
Review: This Little-Known Black Wobbly Dockworker Led the Most Powerful, Democratic Union of His Day »
Interview: If Only Unions Had Managed to Organize the South, Could Trump Have Been Avoided? »
Keep the Cops Out of Our Shop, Seattle Bookstore Workers Propose »