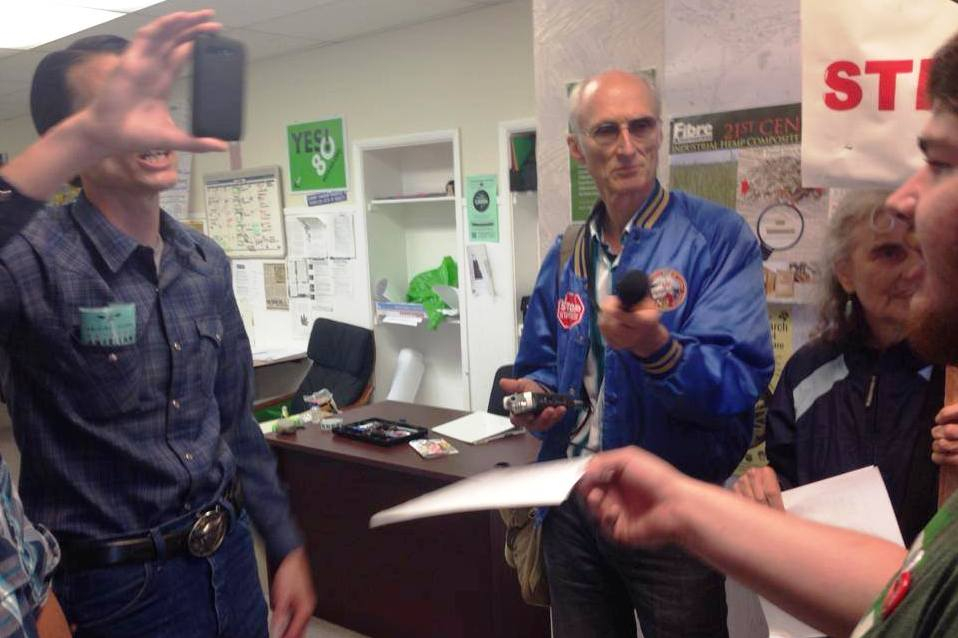 Canvassers gathering signatures for marijuana legalization struck and marched on their campaign headquarters in Portland, Oregon, after being refused paychecks they were owed. Bounced paychecks are a common complaint of canvassers working for nonprofits, initiatives, and candidates. Photo: Shane Burley.

A crew of nine marijuana legalization canvassers walked off their jobs and into the Portland office of the Industrial Workers of the World June 5, looking to form a union.

The workers at the Oregon Campaign for the Restoration and Regulation of Hemp had been refused paychecks they were owed. This was on top of several past bounced paychecks. After their checks did not arrive on the late schedule and management would not even discuss it, they walked out.

With IWW support, the canvassers have formed the United Campaign Workers. In a joint statement they pointed to a “culture of secrecy and information repression that make incidents like this an ongoing problem.”

Before they will return to work, they want a written agreement from management offering them the $15-an-hour pay rate and correct overtime they were promised when they were hired.

After a first march on the boss, they started a call-in campaign, asking supporters and union partners to phone the campaign headquarters and express support. Meanwhile, the campaign has hired other canvassers to replace them.

A second demonstration June 13 brought dozens of supporters from the Portland IWW, Portland Solidarity Network, Jobs with Justice, and Rose City Resistance, who marched up the street and into the campaign office. A worker spokesperson tried to present the demands to canvass director Kyle Purdy—who screamed and swore at the protesters, claiming he represented a “real grassroots” campaign.

“Grassroots doesn’t mean you’re held to a different [lower] standard than everyone else,” said worker Misha Litvak. “It means you should hold yourself to a higher standard.”

The campaign has been gathering signatures for I-21, the Oregon Cannabis Amendment, which would end all legal penalties for marijuana products and extend growing permissions to adult Oregonians. It’s paired with the Oregon Cannabis Tax Act, I-22, which would override existing laws to create a new regulatory framework and funnel money from marijuana sales into state programs.

Workers say they support the campaign and would like to see it pass. The crew repeatedly asked to go back to work, and noted that this crew alone pulled in 600 signatures a day. That meant the campaign had so far lost an estimated 3,000 signatures due to the strike.

Though the initiative campaign has large nonprofit and union support, the local Jobs with Justice presented a community petition demanding that it negotiate with the newly formed union.

Precarious work is the norm in canvassing jobs, whether fundraising for nonprofits or promoting specific legislation or candidates. Many of these projects are underfunded, and bounced paychecks are a common complaint. So are other issues that come with unstable employment, like a lack of say in scheduling.

The Working Families Party has had similar issues with canvassers. During a 2012 campaign in support of Democrat Ted O’Brien’s run for New York State senate, many canvassers raised accusations of missed paychecks. With double and triple shifts coming up closer to election time, a group arranged a march on the boss demanding back pay and a bonus for election day.

But in recent labor disputes at the Twin Cities food justice nonprofit Sisters’ Camelot, board members have used connections in the local progressive scene to diminish support for striking workers.

Replacements Too Were Promised $15

At the Oregon campaign, newly hired workers were completely confounded by the June 13 action: they didn’t know they’d been brought in to replace strikers. They’re being offered the same wage that the striking workers were originally offered, but never actually granted.

After managers threatened to call in the police, workers and community supporters took the demonstration outside.

In an effort to get management to the table, workers have already backed off some of their earlier demands, including health care, and a bonus for workers with dependent children who were not able to purchase groceries after paychecks bounced.

Workers say a manager made the argument that it was “heteronormative” to provide the bonus for people caring for small children.

“As a member of the LGBT community, I find that highly offensive,” said worker Ken Kautz. “It is not ‘heteronormative’ to have dependents, to have children.”

A larger contingent plans to return to the campaign headquarters this morning.

Shane Burley works with the IWW, the VOZ Workers Center, and the Portland Solidarity Network on wage-theft campaigns. He recently completed a documentary about housing justice movements, Expect Resistance.

To find out more about the campaign or how to help, contact the United Campaign Workers at unitedcampaignworkers[at]gmail[dot]com.

Click here for a step-by-step guide to using direct action to get the boss to cough up wages you're owed.