Verizon Retail Workers Win Union Vote—First to Do So 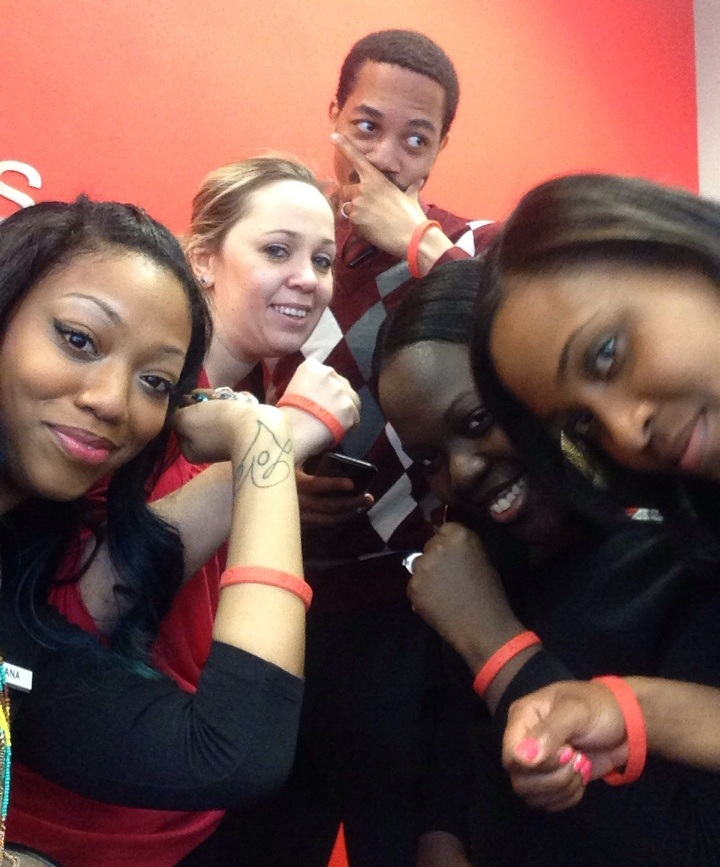 During their organizing drive, Verizon Wireless workers showed off their unity with red wristbands. Retail sales reps and customer service reps at six Brooklyn stores voted 2 to 1 to join the Communications Workers May 14. The wireless side of telecom has remained largely unorganized, outside of AT&T, but these new unionists hope to cause a ripple effect. Photo: CWA.

Wireless is where Verizon makes most of its profits. But for decades, Verizon has kept a wall between union workers in its landline division and non-union workers in its wireless division. That’s how the corporation has maintained lower compensation and worse working conditions for wireless workers.

My co-workers and I have just taken the first step to tear down that wall.

After withstanding six weeks of intense union-busting, on May 14, retail sales reps and customer service reps at Verizon Wireless’s six Brooklyn retail stores voted 39 to 19 to join the our 40,000 landline brothers and sisters—and 80 wireless techs who joined in 1989—in the Communications Workers (CWA).

The telecom industry is a backbone of the modern economy, and its landline side has been heavily unionized for decades. But the wireless side has remained largely unorganized, outside of AT&T. I hope the stand we’ve taken here in Brooklyn sends a ripple effect through Verizon Wireless nationwide, and possibly even through the other major carriers, Sprint and T-Mobile.

Growing up in a middle-class, two-parent household, I had dreams of one day working in corporate America. But when I graduated from college with an international business management degree in the middle of the Great Recession, finding a job seemed like finding that golden ticket in the chocolate bar. A couple months into my search, Verizon called me and I answered.

I wasn’t prepared to have my corporate ladder delusions shattered by the reality of today’s work environment—but hey, you live and you learn.

One thing I learned: Verizon Wireless has been gradually expanding our job duties, giving us new responsibilities without increasing our pay or informing us of the changes. This pattern began in 2010 when they ended their contract with Flextronics, whose employees were serving as technicians in the stores. That work was transferred to the sales reps and customer service people, who were already responsible for their own quota and operations.

So we are demanding clear job titles with descriptions. If they insist on increasing our job responsibilities, then we demand fair compensation.

Verizon Wireless workers in Brooklyn are also compensated at the same rate as workers in, say, Arkansas, even though Brooklyn is the third-most expensive place to live in the country. We’re fed up with working a full-time job on a retail schedule and barely being able to afford rent.

Organizing wireless workers will not only improve our working conditions, but also return bargaining power and help end concessionary contracts on the landline side. Management tells landline workers that the wireless side is more profitable, so “old technology” workers should take concessions. In reality, the wall between the divisions is a corporate fiction. Wireless services don’t work without landline infrastructure—each part needs the other.

CWA’s contract with Verizon Landline expires in about a year. If Verizon Wireless does not sign a quality contract with the newly organized Brooklyn retail workers before then, it’s possible the landline workers could leverage their negotiations to help their wireless counterparts. They’ve done this in the past for the metro area wireless technicians, the ones who joined in 1989.

Before reaching out to CWA, I did my own research. I read up on the union, on previous authorization elections in different parts of the country, and on the correlation between declining union membership and declining wages.

Although unionizing Verizon Wireless had not been done before, I believed it was possible here in Brooklyn. I reached out to people I trusted in the company, people I knew had the respect of their peers.

When we felt the majority understood their value to the company, their potential power, and what was at stake, we called CWA to come in and help us organize further.

After going public, we showed unity by wearing red wristbands, and we adopted a “brother’s keeper” strategy: when Human Resources or management would approach a co-worker to discuss the union, we would insert ourselves into the conversation or stand around them so they didn’t feel alone. We checked up on people in different stores to make sure they were okay.

We also used technology to communicate and keep those who were weaker confident. I started a chat with GroupMe, a group text messaging service, and added everyone who had signed cards to be public. We also had CWA organizers, Verizon landline workers, and our attorney on the chat. GroupMe helped us to keep open dialogue about the anti-union rhetoric from management in each store. We also alerted each other about corporate visitors and any intel we’d collected to decipher their strategy.

It was intimidating to get constant visits from the company’s legal team, executive leadership, and HR in every store. We were visited constantly by high-level management such as Chief Operating Officer David Smalls, who encouraged us to vote against the union.

“Management hasn’t been honest or upfront about being anti-union,” said Tatiana Hill, one of my co-workers. “They have falsely appeared to be concerned for us as reps, rather than protecting their own interests.”

But despite this pressure we didn’t falter, because more than them, we meant business.

Bianca Cunningham is a retail sales rep at a Verizon Wireless store in Brooklyn. Zelig Stern is an organizer with the Communications Workers (CWA).

Related
New Jersey Welfare Workers Sound the Alarm on Safety »
Communications Workers Fight Telecom Giant for MLK Day Off »
A Common Defense: Mobilizing Veterans in Labor to Beat Trump and the GOP »
How E-ZPass Workers on Staten Island Are Building Power During the Pandemic »
Sample COVID-19 Health and Safety Measures to Demand from Management »