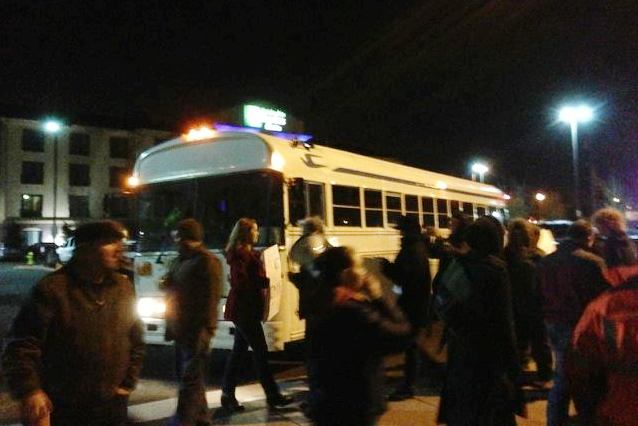 The lockout of Pacific Northwest grain workers has hit a full year. They marked the grim anniversary with an early-morning direct action. Photo: Shane Burley.

The action came a day before the one-year anniversary of the lockout of ILWU Local 4 by United Grain.

International Longshore and Warehouse Union members from Vancouver and Portland, Oregon, have endured a year of contentious contract negotiations, lost work, and harassment. Talks on a master contract for grain workers, between four big employers and four Pacific Northwest ILWU locals, broke down in late 2012. After grain workers voted down management’s “last, best, and final” offer by 94 percent, two of the companies—United Grain and Columbia Grain, which operates at the Port of Portland—imposed their terms anyway, hoping to provoke a strike. The unions didn’t take the bait, but both employers subsequently locked workers out.

To justify the lockout, United Grain cited a video that its private investigator claimed showed sabotage of machinery by a longshore worker. The county prosecuting attorney’s office reviewed the video and declined to file charges against the longshoreman, but despite the lack of evidence, the lockout continues.

Both United Grain and Columbia Grain hired the strikebreaking firm J.R. Gettier & Associates to mobilize a scab workforce to work the grain elevators, provide security for their personnel, and harass and spy on local longshore workers and supporters.

In the early morning darkness shortly before 5:30 a.m. February 26, community members arrived at the Holiday Inn Express in Vancouver to protest Gettier employees, who double as both replacement workers and security, lodging at the hotel.

The protesters arrived as the scabs were boarding a bus for the Port of Vancouver. As the bus left the parking lot, community members formed a picket blocking its path.

Local police immediately confronted the protesters, targeting women, pushing them aside, and escorting the bus out of the parking lot.

Protesters then caravanned to the port, pursuing the bus full of scabs. While the bus waited in line to gain entrance to the port, protesters intercepted it and set up a picket outside United Grain’s only entrance, thus blocking the bus and preventing individual scab vehicles from entering the port.

Protesters occupied the road and blocked the gate, refusing to let the vehicles move. Longshore workers and the community supporters surrounded the bus, chanting, “Scab cars turn around, no union busting in this town,” and “When longshore workers are under attack, what do we do? Stand up, fight back!”

Longshore workers from the night shift, exiting the port, witnessed their union brothers and sisters and community members joining in an act of solidarity. We heard many cheers of support and some joined on foot; others made use of their vehicles to help surround the bus with traffic.

It wasn’t until a Vancouver police officer drove his SUV into the protesters’ picket line at the front gate that the procession of scab vehicles was able to enter the port.

After the front gate was cleared, police officers shoved protesters out of the way to allow the bus in. The 45-minute picket came to an end.

Police presence and intervention at the Vancouver picket line is nothing new—nor is their commitment to protecting United Grain’s interests during this dispute. Local and state police officers, in collaboration with Gettier, routinely escort scabs to and from the ports of Vancouver and Portland, physically confront longshore workers, and break longshore picket lines.

Downriver in Longview, Washington, longshore workers from Local 21 and their families are all too familiar with this intervention. When the multinational grain shipper EGT locked out Local 21 from grain jobs in 2011 and employed a scab workforce, local authorities and private security personnel harassed, beat, and arrested many longshore workers.

Tensions reached a climax when the Coast Guard was ordered to intervene on the side of management in early January 2012—a first in nearly 40 years.

Gettier personnel have been involved in several physical confrontations at the gates of both United Grain and Columbia Grain, where the longshore workers have pickets. The most disturbing confrontation was the unprovoked attack on a man in his sixties, who was held and tasered in the temple by one Gettier guard, then pepper-sprayed by another.

None of Gettier’s guards faces charges. The police have refused to arrest them or follow through with the requests for information that the victim needs for his legal case.

Local 4 has taken principled stances in solidarity with the Vancouver community, in word and action.

Last November 4 a community picket organized by Rising Tide, a group organizing against climate change, temporarily shut down the Port of Vancouver in protest of Tesoro Corp.’s and Savage Companies’ plans to build an oil terminal there.

In fact, Local 4 had unanimously passed a resolution opposing the proposed oil export terminal, choosing workplace safety and concern about the health issues associated with handling and transport of crude oil over the promise of more longshore jobs.

As the longshore workers continue their struggle in Vancouver and Portland, all longshore workers on the West Coast are preparing for negotiation of the 2014 coastwide master contract with the Pacific Maritime Association, an organization of stevedore companies, ports, and shipping companies. As maritime capital prepares demands for concessions, the need for solidarity will increase.

Related
It's Awfully Convenient for Shippers that Longshore Workers Get Blamed for Delays, As Contract Fight Looms »
The Supply Chain Disruption Arrives ‘Just in Time’ »
Viewpoint: Climate Justice Must Be a Top Priority for Labor »
Bottom-Up Labor Solidarity for Palestine Is Growing »
Hotels Don't Waste a Crisis »