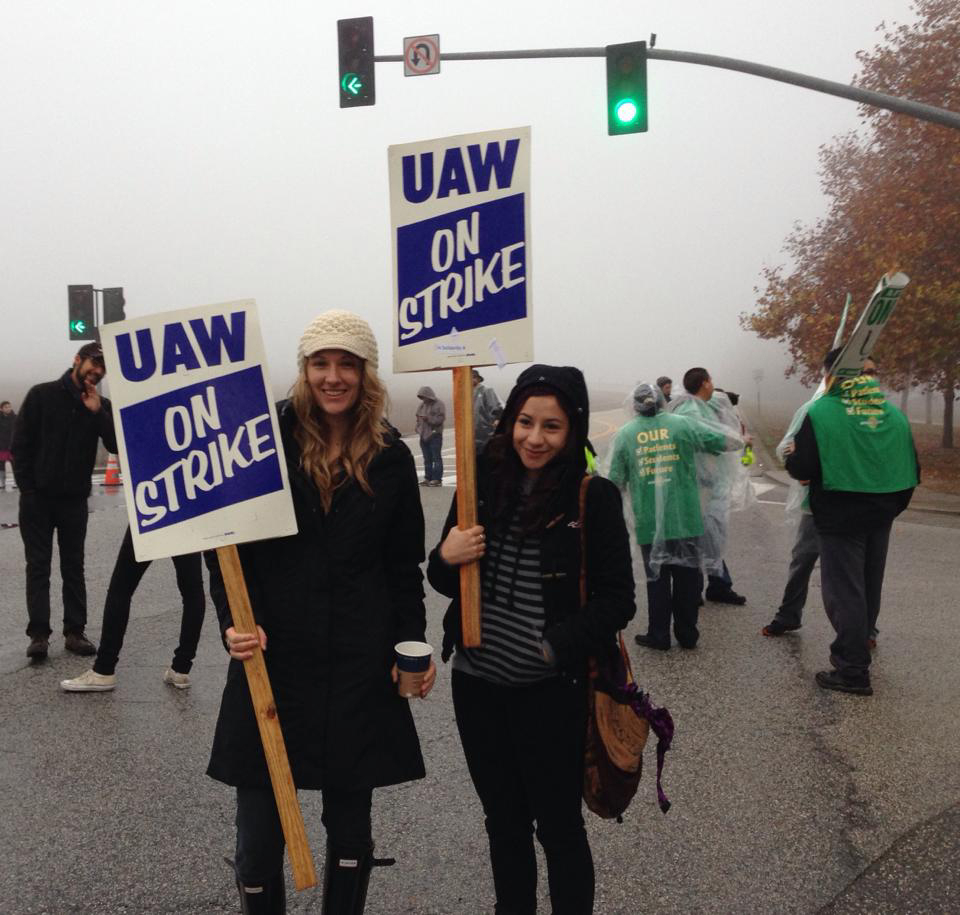 Thanks to a strike threat and unified backup from other campus unions, student workers at the University of California Santa Cruz won an agreement March 4 that will cut workload and alleviate de facto two-tier set-ups.

Management caved completely, handing members of United Auto Workers Local 2865 victory on a pair of grievances the union was preparing to strike over the next day.

“What was key in achieving this victory was the solidarity shown across campus populations,” said Michelle Glowa, local UAW unit chair and a doctoral candidate in environmental studies.

“This united support put so much pressure on the administration that they ultimately agreed to all of our demands rather than face another day of striking,” Glowa said, referring to a strike last fall that shut down UCSC for the day. Local 2865, which represents more than 13,000 graduate and undergraduate student employees at UC statewide, did a solidarity strike to support AFSCME Local 3299, which represents UC’s service and patient care workers. In conjunction with our picket line, undergraduate students blocked the entrance to campus.

The threat to strike over the two grievances was incredibly successful in this situation. The planned grievance strike aimed to expand the tools available to state workers after their contract had expired. Post-contract grievance strikes have been defended by the National Labor Relations Board, and the UAW contends they are legal.

Two grievances were at the center of the debate. The first involved 28 undergraduates who had worked in the Mathematics Department.

These students were essentially working as teaching assistants (TAs), a graduate employee position: they held mandatory “sections” (discussion seminars held outside of lecture) and graded student work. However, they were being paid hourly, at a low rate, with none of the TA benefits (health insurance, fee remissions, child care subsidies) and no union representation.

The undergraduates were getting paid roughly a quarter of what a TA earns.

“The biggest concern here is that the university was taking better-paying, better-benefited jobs and turning them into low-wage, low-security positions, while also making it difficult for graduate students to obtain work at the university while pursuing their degree,” said Josh Brahinsky, local recording secretary and a doctoral candidate in history of consciousness.

For example, in the neighboring Economics Department, many graduate students (who would be prime candidates for TA positions in math) have only been offered jobs this year for two out of three quarters. This forces students to seek jobs off-campus, go into debt by taking out student loans, or take leaves of absence.

Across the university we have seen the universal excuse of “budget cuts” given for shifting the teaching burden—first from faculty members to graduate TAs, and now from graduate students to undergraduates.

UCSC agreed to pay the undergraduates full back pay and fee remissions, roughly totaling $6,000 per person for each quarter they worked.

And the university agreed to discontinue the practice of devaluing these front-line teaching positions. While the specifics remain to be worked out, UAW is heartened that the university is at least agreeing to this principle.

The second grievance involved TAs in the arts division who were forced to spend 13.5 hours per week in the classroom, either attending lecture or teaching break-out sections.

This made it impossible for employees to complete grading, reading, answering emails, and class preparation without surpassing the contractual workload limit of 20 hours per week—and left little time for TAs to provide any meaningful feedback to students. Education in that class was severely diminished.

The university agreed to reduce classroom time for these TAs to 10 hours a week, giving them each three-and-a-half more hours to concentrate on the other components of their teaching.

The university also agreed to immediately set up a joint labor-management committee to oversee workload concerns. The committee’s first task will be to assess other courses in the arts division with similar workload problems.

“This development is especially important because it connects with one of the issues within our contract campaign that the university has refused to bargain over,” said Brian Malone, doctoral candidate in literature.

The union has been arguing that graduate students should be included in conversations about workload and class size. Until now, “the university has completely refused to negotiate on this issue,” Malone said, “but now UCSC has given a model for what could be implemented systemwide.”

Erik Green is a member of the UAW 2865 executive board and a PhD student-worker in education at UCSC. Meet members of UAW Local 2865 at the April 4-6 Labor Notes Conference in Chicago.