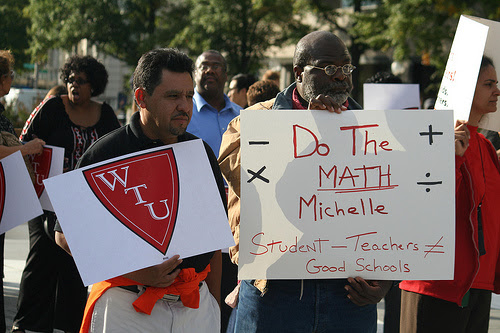 Oops! Evaluation scores used to determine which teachers are retained, rewarded, and even fired were miscalculated for the last school year, D.C. teachers learned shortly before Christmas.

The mistake means some teachers may have been wrongly fired—even under the district’s arbitrary rubric. According to education reporter John Merrow, nearly 600 D.C. Public Schools teachers have been fired in recent years—most because of their scores on IMPACT, a teacher evaluation system that relies heavily on students’ test scores.

Former DCPS Chancellor Michelle Rhee instituted IMPACT over the objections of parents and teachers. High scores can earn teachers a bonus of up to $25,000. The annual cost of the program, according to the Washington Post, is $7.2 million.

The Washington Teachers’ Union (WTU) received notification December 20 that errors had been made on the calculations of teachers’ IMPACT scores during school year 2012-13.

The arithmetic mistakes appear to have affected one out of 10 teachers whose evaluations include student test results. (Some teachers’ IMPACT scores aren’t affected by student tests because their students are in untested grades or subjects.)

The miscalculations underline how arbitrary and flawed such measures are. By making decisions based on IMPACT scores, Chancellor Kaya Henderson is not only wasting tax dollars but also turning teacher quality into a roll of the dice. Roll a six and the teacher gets a bonus. Roll a one and the teacher is fired.

The WTU negotiated checks and balances in the union contract that mitigate some of the harm caused by IMPACT—but teachers’ input is limited by a district law that gives the chancellor control over teacher evaluations.

Henderson has modified IMPACT to make it somewhat less dependent on test scores. Still, it remains an unsound and flawed formula, and she continues to use it to make decisions about teacher pay and teacher firings.

In other words, we now know that IMPACT’s flaws are even worse than we feared.

Teachers and unions have grappled with similar problems in other cities, including Chicago and New York. State legislatures set minimum percentages of how much a teacher must be evaluated by student performance, including test scores. Local unions could only bargain over evaluations using these minimums set by the state.

As Randi Weingarten, president of the national Teachers union, said after revelation of these miscalculations, it should be clear to all now that you can’t simply take data, apply an algorithm, and use whatever pops out of a black box to judge teachers, students, and schools.

The IMPACT scandal is just the latest example of the top-down approach that started in 2007 under Rhee, who brazenly ignored the needs and opinions of community members. Both chancellors’ mantra has been, “Trust us, let us worry about the details, and don't ask questions about how we make decisions.”

Henderson’s “my way or the highway” approach to teaching and learning has led to mass teacher firings and school closings. We’ve seen budget miscalculations that led to the firing of hundreds of teachers. We’ve seen fake estimates of the cost of closings, used to justify ripping the heart—the neighborhood school—out of many of our city’s neighborhoods.

The latest bad news came just days before Christmas—an apparent attempt to release the news when parents and teachers were focused on the holidays and family get-togethers. Burying bad news during the holiday season is a tried-and-true public relations trick.

Two years ago, after what a Washington Post reporter described as “months” of freedom-of-information requests and “general nagging,” city officials released a report on erasures on student tests—an indicator of cheating. Although the report was dated July 2011, officials delayed the release until New Year’s Eve.

It’s time for the district to work with teachers and parents—not technocrats and bean counters—to figure out how to give all children in D.C. better schools, not just a few.

The WTU, parents, and school advocates are demanding that Henderson and Mayor Vincent Gray change the high-handed way DCPS operates and involve teachers and parents in decision making.

Henderson needs to investigate the mistakes, address the consequences, and take responsibility for actions that have hurt the quality of teaching and learning.

Going forward, DCPS should set up a better, more formal way to work with parents and teachers to develop an evaluation system, so we can make sure this doesn’t happen again.

The WTU invited parents and community members to a community conference February 22. “A Shared Vision for Reclaiming the Promise of Public Education in the District of Columbia” was the first in a series of WTU seminars designed to get teacher evaluation and school reform right.

Elizabeth Davis is president of the Washington Teachers’ Union.

WTU members will meet with teachers from around the country at the Labor Notes Conference April 4-6 in Chicago.

Related
As Omicron Rages, Teachers and Students Fight for Safety Measures in Chicago and Elsewhere »
Why (and How) Michigan Nurses Rebuffed a Raid on Our Union »
Teachers Strike against a ‘Heartless’ School Board in Biden’s Hometown »
As Strike Looms, UC Lecturers Raise the Stakes »
Michigan Nurses Defeat AFT-Backed Raid »