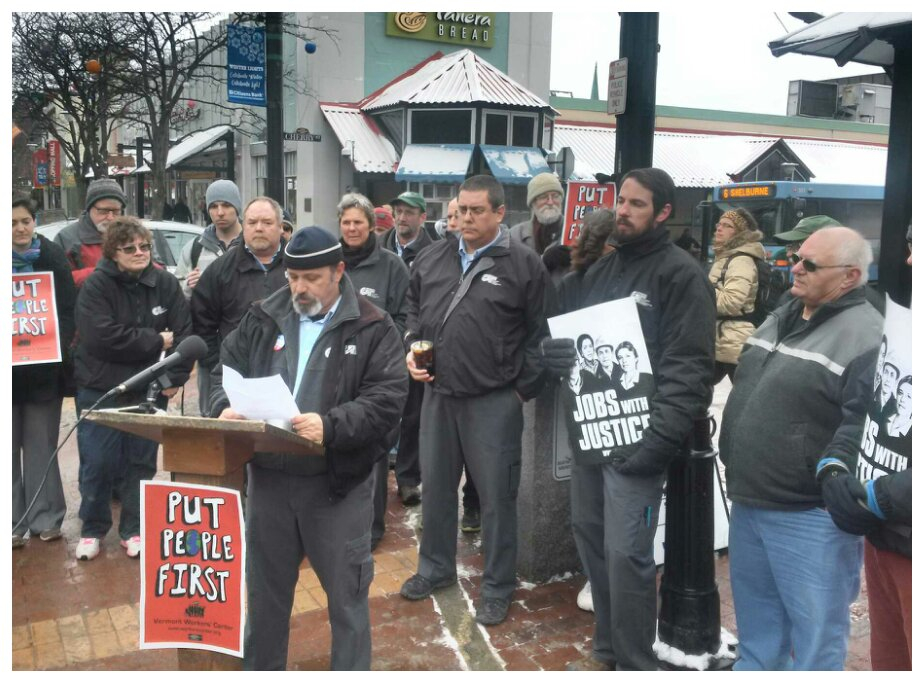 Bus drivers in northern Vermont are set to walk out March 10. The strong local solidarity they’ve mustered could serve as an example for transit workers battling similarly extreme conditions around the country. Photo: Jonathan Leavitt.

Bus drivers in northern Vermont have voted 53-4 to strike against unsafe conditions, surveillance and discipline, and part-time status. The walkout is set for March 10.

The strong local solidarity they’ve mustered could serve as an example for drivers and transit workers battling similarly extreme conditions around the country. Over the last few decades 85 percent of transit authorities have pushed drivers to accept part-time conditions.

At a pair of February 19 community rallies, an array of unions, Vermont Workers’ Center members, students, politicians, and parents of school kids who ride the buses pledged to “walk with the drivers” if a fair contract is not resolved.

The “long work days, split shifts, and forced overtime” scheduled by the Chittenden County Transit Authority are dangerous, said Teamsters Local 597 member Rob Slingerland at a community speak-out held at the Cherry Street Bus Terminal. The event was organized by rank-and-file drivers together with a coalition of unions and community groups.

Slingerland’s schedule, for example, has him working from 6:50 to 9 a.m., then from 2:20 to 7:20 p.m. So he is paid for only seven hours’ work, but “my day’s total spread is 12.5 hours,” he explained. “The contract says we can be forced up to a 15-hour spread. Because of that, they’re telling us we have to be available for that 15 hours but only being paid for the hours worked.”

“These sound like workplace issues from 1914, not 2014,” said Denise Youngblood, president of the faculty union at the University of Vermont.

'The Last Ones Thought Of'

“Every day we put the lives of our friends and families and ourselves in their hands,” said Burlington City Councilor Rachel Siegel. “Is it just to ask a driver to go without a bathroom break and end up urinating in their pants? Is it just to ask workers to drive to the point of fatigue and accidents?

“Do we need to wait for a tragedy before we take action? I hope not.”

In its 41 years CCTA has seen multiple expansions of routes, a $3.1 million investment in new buses in 2008, and a $3.3 million investment in new buses equipped with Wi-Fi in 2012. It has advocated for construction of a $15 million downtown transit hub and a $10 million bus station. According to its own figures, ridership has grown by 63 percent. Its mission describes it as “enhanc[ing] the quality of life for all.”

But the drivers are “the last ones being thought of,” said State Senator Ginny Lyons. “You can’t have capital expansion, increasing infrastructure, more buses, without carefully ensuring each step of the way you have money for operations, and that means drivers.”

The Vermont AFL-CIO has ordered a huge number of “CCTA Fair Contract Now” lawn signs, a public forum will be held in Burlington City Hall, and an informational picket is set for next week.

“As a passenger I am very passionate about the drivers’ ability to be treated with respect,” said Workers’ Center member and mother Anna Gebhart, “because the safety of commuters equals safe and fair working conditions for them.”

Running the Union from Below

The drivers’ rank-and-file contract campaign, with a strong emphasis on community solidarity, marks the turning of a page.

In 2009 a group of CCTA drivers formed the Sunday Morning Breakfast Club as an informal caucus. The caucus, which aimed to change Local 597’s top-down, bureaucratic culture, got advice and support from Teamsters for a Democratic Union. Its members formed an activist core that has mobilized very successfully to win the right to elect stewards (previously appointed) and to open up bargaining to drivers.

Locally “there were two things going on,” says former driver Chuck Norris-Brown: “the actual Teamster meetings with the local and the Sunday Morning Breakfast Club.”

Since then, Slingerland says, Local 597’s current assistant business agent, Tony St. Hilaire, has embraced the TDUers. St. Hilaire has come to the Breakfast Club to hear members’ issues and share food. In one such meeting, St. Hilaire said, “I want to know where the drivers want to go next.” Chief Steward Mike Walker, one of the Sunday Breakfast Club members, is on the bargaining team.

During heated 2011 contract talks with CCTA, St. Hilaire told drivers that if they were frustrated, they should signal to him and they would all walk away from the table together.

Slingerland describes his commitment to his fellow drivers: “Somebody had to give me this gut feeling, now I’ve got to give it to somebody. As long as you keep it so you’re getting one person at a time, you’re still moving forward. When a [contract] campaign does come around, people will come to you, because you’ve been there all along.”

Walker, a 20-year bus driver and steward, has been fired three times for his organizing, and reinstated. He described a climate of fear and retaliatory firings.

For instance, he saw “a 30-year employee get let out the door because she got ill, it took longer for her to heal than it was supposed to, and CCTA just said, ‘see you later,’” Walker said.

The best defense against such treatment is “people exercising their rights as a union” and the community practicing solidarity, said Walker, speaking on a student-organized panel at St. Michael’s College about uniting local labor struggles.

The National Highway Traffic Safety Administration reports that driver fatigue is a leading cause of accidents, resulting in 100,000 crashes, 1,550 deaths, and 71,000 injuries annually. When such crashes are the result of employers’ practices, those employers may be saving money by refusing to hire a full staff and then mandating overtime—and shifting the cost onto the rest of society. The agency tallies the annual cost of these fatalities, injuries, reduced productivity, and property loss at $12.5 billion.

"Right now we have a bill in the Senate about distracted driving in cars," said Senator Lyons. "Nothing could be more distracting than… to be tired on the job or be completely deadened and having to continue driving for such a long time. We work hard to ensure we have safe workplaces, and this doesn’t sound like it is one.”

Recently the drivers’ union has been coming together with a coalition of other unions and concerned bus riders at the Vermont Workers’ Center. After providing solidarity for St Michael’s College janitors, the group now counts those janitors among its leaders.

“The CCTA drivers have helped the custodians’ union at Saint Mike's from the beginning,” said custodian Graham Lebel. “When two of our organizers got fired, CCTA drivers were there. We plan to fully support them in their effort to get a fair contract.” The groups have been at each other’s rallies, strategy meetings, and public statements.

Nurse Cory Mallon, a Workers’ Center leader, was one of many union activists who attended the bus terminal speak-out. Mallon described the connections between public health and public transport. “As our social support systems come increasingly under attack, public servants like drivers and front-line health care workers absorb much of the impact,” he said.

A similar community solidarity coalition helped nurses win their union in 2002, pass Act 48 establishing a path to single-payer health care in 2010, and prevent the privatization of a regional hospital’s dialysis unit in 2011.

Slingerland said mechanics, who are also members of Local 597 but in a separate bargaining unit, have gotten strike benefits approved by their union leadership, “so they don’t have to cross our picket lines.”

“I look at the different unions, all the different unions, as a single entity,” said Slingerland. “You get everybody in each union shop together in the same way, and that’s a rock-solid community. The more you have that, the sooner the man doesn’t have all five fingers on the hammer and people start getting what they deserve.”

Jonathan Leavitt is a journalist and community organizer in Burlington, Vermont. Contact him at jonathan.c.leavitt[at]gmail[dot]com or on Twitter at @JCL_VT.

Related
Frustrated Over Contract, Locomotive Engineers Vote to Oust President »
Every Union Contract Right Now Should Be the Best Ever »
New Leadership, New Direction in Major Midwest Teamsters Local »
Ahead of Halloween, Sysco Teamsters Give Corporate Ghouls the Heebie-Jeebies »
UPS Says No to Air Conditioning, But Here’s a Surveillance Camera »