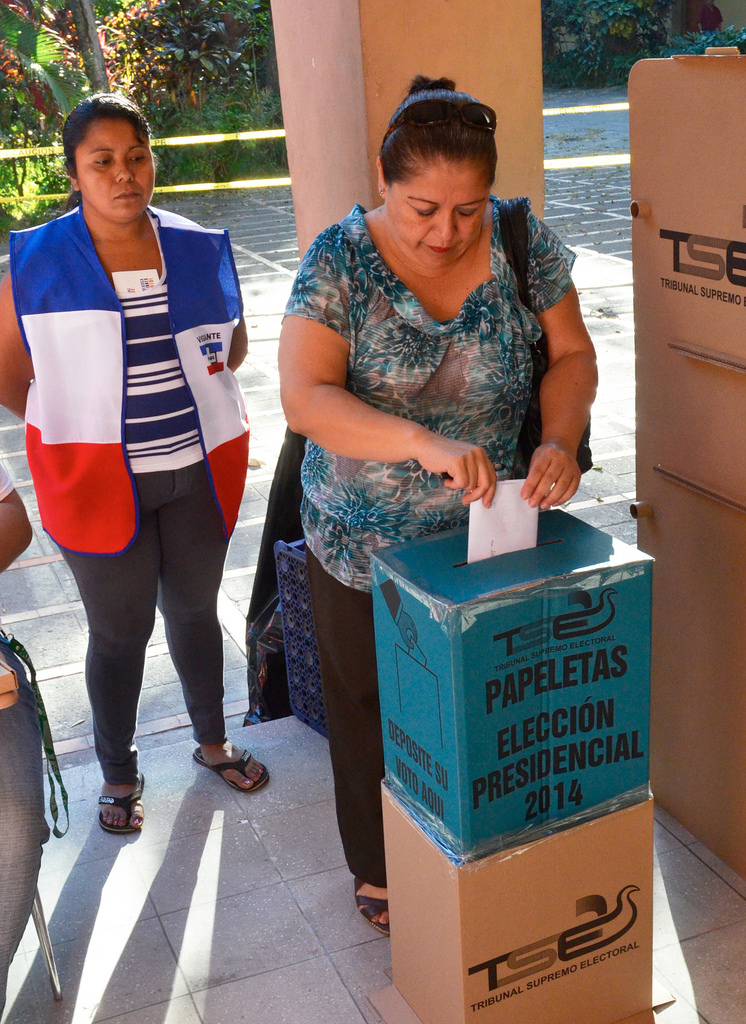 Salvadorans went to the polls Sunday and the union-backed party won the first round. The run-off is March 9. Photo: CISPES.

On a hot and breezeless day at the end of January, representatives from 83 unions across El Salvador gathered in the Casa Sindical (a shared union hall) in San Salvador to greet a delegation of international election observers. We had come to ensure that the presidential election would be free of fraud, violence, and intimidation.

The images and names of their fallen comrades loomed on the walls behind them in black paint. Febe Elizabeth Velásquez. Juan Chacón. Ten unionists were martyred in a 1989 bombing by right-wing death squads, targeted because they were union leaders.

That image highlights why the February 2 election marked a historic moment—not only a test of El Salvador's recent democratic reforms, but a referendum on an impressive array of new social programs that the left-wing Farabundo Martí National Liberation Front (FMLN) government has launched. From a free glass of milk for school kids to financial assistance for unemployed workers, all would most likely be dismantled under a right-wing president.

The primary election results bode well for workers. In a field of five candidates, FMLN's Salvador Sánchez Cerén won 49 percent—10 points ahead of the next vote-getter, the ARENA party's Norman Quijano.

ARENA, founded by notorious death-squad leader Roberto D'Aubuisson, is the farthest-right of the country's three main parties. The run-off between Sánchez Cerén and Quijano will be March 9.

For decades, a series of military dictatorships terrorized and impoverished the Salvadoran population, selling off the country, piece by piece, for the benefit of the infamous 14 elite families.

A bloody civil war broke out in 1980, sparked by the assassination of Archbishop Oscar Romero. The war spanned 12 years and resulted in the death or disappearance of some 75,000 Salvadoran men, women, and children. Death squads and guerrilla warfare, torture and misery wracked this tiny nation of jagged volcanoes and crashing waves.

The FMLN was the umbrella of five armed resistance groups that fought the Salvadoran government. In the U.S., it was demonized by the Reagan administration, which funded the government, because of its Marxist ties; the administration tried to paint the FMLN’s wartime human rights violations as equivalent to those of the army and its death squads.

The FMLN became a legal political party after the 1992 peace accords. In 2009, it aligned itself with moderate professionals to elect Mauricio Funes, a left-leaning journalist, as president.

Funes inherited an El Salvador in shambles. Domestic food production had been destroyed to the point that rice, bean, and corn production could meet only 30 percent of national demand.

Importing food made the cost of living much higher than most salaries would cover. In fact, at one point, a minimum-wage salary ($220 a month) could just barely pay for a family's bean consumption—and nothing else.

Three million Salvadorans had already fled to the U.S. and elsewhere. The collective $3 billion a year in remittances they sent home were all that was keeping many families afloat.

The right-wing leaders had shrunk the government, à la Grover Norquist, eliminating thousands of jobs in the process. The Central America Free Trade Agreement, CAFTA, passed in 2005, essentially shut the Salvadoran people out of their own economy. Money flowing into the country overwhelmingly stayed in the hands of foreign-owned corporations and the Salvadoran elite. Hundreds of millions of dollars were squandered through public and private corruption.

In surveys, 70 percent of the population claimed their biggest hope for the future was "to leave" El Salvador.

But in five short years, the new government made remarkable progress, implementing a series of projects that have returned to El Salvador its economic spine, helped eradicate hunger and illiteracy, and begun creating new jobs to make up for those lost under ARENA's rule.

The price of beans is now down to an affordable 50 cents a pound, thanks to the revitalization of domestic production. Working families' buying power is on the rise.

The School Packets program has Salvadoran factories making uniforms and shoes that are given to elementary students free of charge. Next Sánchez Cerén hopes to expand the program to cover high schoolers.

Another program provides a glass of domestically produced milk to schoolchildren, keeping kids healthy and keeping money from fleeing the country.

Ciudad Mujer is a one-stop social service center for women. It provides access to reproductive health care, a safe place to report domestic violence, training and mentoring towards economic independence, and professional childcare on-site. Currently there are five such centers; Sánchez Cerén pledges to expand to 14, one in each department (province).

Rural health centers, a pension system for the poor and abandoned, temporary financial assistance for the unemployed while they get skills training... the FMLN approach to worker and social advancement is comprehensive.

Private sector workers, backed by the current administration, have been fighting to raise the minimum wage. The private sector bosses, logically, are opposing it.

"Our current minimum wage does not meet our cost of living, so we depend on the Funes social programs to make up for the gap until we succeed in raising it," said Atilio Jaimes of the food workers union.

Last year, El Salvador's public sector unions led the fight against a privatization bill that aimed to auction off everything from highways, ports, and airports to municipal services and higher education to private companies, mainly foreign multinationals. The U.S. government helped Funes's office draft the bill, and pushed hard for its passage.

A version of the privatization law passed, but water, health care, and education were spared. A coalition of right-wing parties now controls the legislative assembly. If the right wins the presidency, too, the FMLN may not be able to prevent privatization of the remaining areas.

"If ARENA wins this next round, they will do everything in their power to make organized labor disappear," said Estela Ramirez of the textile workers union. "An FMLN victory would empower us to demonstrate our fighting spirit to the unorganized, and reactivate the fight in them as well."

FMLN also pledges to create 50,000 jobs each year, get a handle on the country's massive external debt, and start taxing big corporations.

Though it is not entirely clear to everyone whether the social programs are financially sustainable, it's no surprise that the union members at Casa Sindical were rooting for the FMLN.

Maria Escote of the Santa Fé community smiled wistfully. "Only the FMLN will allow us to become the owners of the land beneath our houses," she said. Her compadre Baltasar Mendoza nodded in agreement. The group has been trying to win ownership of the land where they live: former railroad tracks now fallen into disuse.

Manuel Mira of the teachers union, whose members were targeted during the war, praised Sánchez Cerén as "an architect of peace."

The gang problem alone is a telling reminder that major divisions and mistrust are alive and well in El Salvador. But thanks to the newly reformed electoral process, Sunday's election was free of the long waits and conflicts that have marked previous elections. The number of polling places was up from 400 to almost 1,600, and citizens could now vote in their hometown instead of a location assigned by last name.

Some 60,000 members of the three main parties helped with the election as officers or watchers at local polling places, and more than half the country's 5 million voters turned out.

Even traditional critics of Salvadoran elections in general, and the FMLN specifically, have spoken in support of El Salvador's self-determination this time. U.S. Ambassador Mari Carmen Aponte announced U.S. neutrality; more than 50 voices in Congress chimed in with agreement.

We international observers were filled with hope on election day as we witnessed the people of El Salvador determining their own leaders. If Sánchez Cerén wins the second round, it will likewise be up to the people to hold the FMLN accountable for its promises.

Emily B.R. Rodriguez is a union staffer from Philadelphia. She traveled to El Salvador with the Committee in Solidarity with the People of El Salvador as a 2014 election observer.

Related
Viewpoint: Support Veterans by Defending, Not Defunding, Public Sector Jobs at the Post Office and the V.A. »
Review: How Labor Can Stop ‘The Privatization of Everything’ »
Puerto Rican Electrical Workers Union Fights Privatization of Island’s Grid »
Another Look at the VA, in the Midst of a Pandemic »
West Virginia Strikes Again, Defeating Privatization Bill in a Single Day »