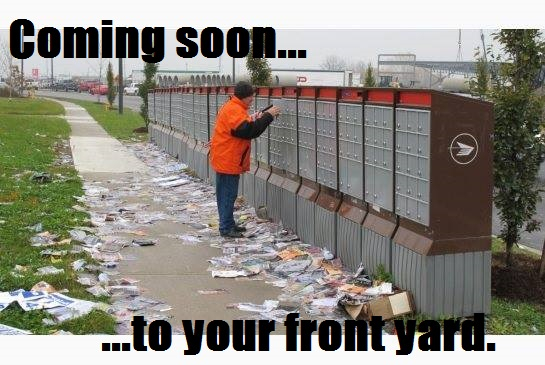 A single letter stamp, currently 63 cents, would rise to $1 per stamp on March 31 (85 cents if you buy in bulk, 75 cents if you use a meter machine, and under 70 for large-volume mailers). And within five years, everyone would have to walk to a “community mailbox” to pick up their mail.

Maybe the corporation and the federal government thought people wouldn’t notice news released the day after Parliament closed up shop for the holiday season. Maybe they thought the country would just get over it.

They were wrong. The Canadian Union of Postal Workers, municipalities, and community groups are fighting the plan.

Organizations representing the disabled, seniors groups, farmers organizations, and community activists have joined rallies across the country. Opponents of the plan are meeting with mayors, municipal representatives, Members of Parliament, small business owners, and community groups.

The cities of Vancouver, Victoria, Medicine Hat, and Sault Ste. Marie have passed resolutions in favor of door-to-door delivery. We can anticipate more such resolutions; the mayors of other cities have already announced their opposition.

Canada Post’s plan must be held up to scrutiny and exposed as the terrible idea it is. We need to spend some time debating what it would mean for Canada to become the first country on Earth to lose our door-to-door delivery.

Canada Post President Deepak Chopra and the Conservative government that hired him have some explaining to do before they cut our postal service. They need to tell the public how you make a service viable by offering less and charging more.

They also need to explain their alarmist figures. A Conference Board of Canada report claimed Canada Post would lose $1 billion by 2020. The calculation was based on a supposed loss in 2012—when in fact, Canada Post has turned a steady profit for the last two decades, reporting net profits of $94 million in 2012, $439 million in 2010, and $281 million in 2009.

There was only one year in the past 18 in which Canada Post didn’t make money: 2011, the year it locked out its employees and had to settle a giant pay equity claim.

But to listen to the CEO and the Conservatives, you’d think the postal service was on the verge of collapse.

The rationale for why more than 5 million Canadians are being forced to go to community mailboxes is far from clear. Chopra has been unapologetic—he even stated that seniors would welcome the opportunity to get more exercise.

In areas that already have the outdoor community mailboxes, snow and ice have been a problem. Now we’re facing the prospect of hundreds of thousands of expensive, inconvenient, inaccessible, snowed-in community mailboxes. The corporation is also musing about putting the mailboxes in convenience stores.

Canada Post estimates 6,000-8,000 letter carriers and associated jobs will be lost. Our estimate is similar. The new community mailboxes are being purchased from an American supplier.

Hiking rates and centralizing delivery might make the corporation more appealing to privateers, who could service the mailboxes with less labor—and perhaps this is the endgame of Prime Minister Stephen Harper.

But it will certainly do nothing for the Canadian public who owns and uses the postal service.

It will do nothing for the elderly and other folks with mobility issues. And it will do nothing to leverage the vast retail network of post offices and infrastructure that is Canada Post’s most significant asset.

Instead of deep cuts, Chopra and the Conservatives should go back to the drawing board to find better alternatives to improve Canada Post.

They don’t need to look far. Other parts of the world have displayed much more innovation. Some are introducing postal banking, which both underwrites the cost of universal delivery and is a boon to customers—especially low-income people, those who rely on Money Mart-style payday lenders, and residents of rural and northern communities. The 6,500 post offices in Canada Post’s retail network would give it more branches than any other bank in the country.

Many postal operators around the world have operated banks for years. Canada did too, until the postal bank was killed in 1968.

Blacklocks Reporter broke the story February 10 that Canada Post had run a secret, four-year study on the prospect of postal banking. The report was favorable, calling the idea “a win-win strategy”—but the study was abruptly halted in October 2013, not long before the cuts plan was announced.

A review of Canada Post’s charter is scheduled for this year. Wouldn’t such a review give the government the ideal forum to hear all the facts and properly consult the public on the future of public postal service?

Instead, Chopra held 46 invitation-only meetings and some online consultation, the results of which he refuses to produce. This isn’t good enough.

So far, Harper and his henchman have proved impervious to public outrage. The Conservatives are digging in for a long fight. But there’s an election coming in 2015. Judging from the reaction so far, opportunities will abound to tell the Harper government we want our post office back.

George Floresco is third national vice president of the Canadian Union of Postal Workers. You can send a message to your Member of Parliament by visiting savecanadapost.ca.

Related
VIDEO: Signed, Sealed and Delivered: Film and Discussion of Rank-and-File Militancy at the Post Office »
It's Been a Long Nightmare Before Christmas for UPS and Postal Workers »
General Motors Returns to Oshawa—But Offers Only Second-Tier Jobs in a ‘Pop-Up’ Plant »
How Postal Workers Saved the Election »
Your Letters and Parcels Are Piling Up Thanks to the New Privatizer General »