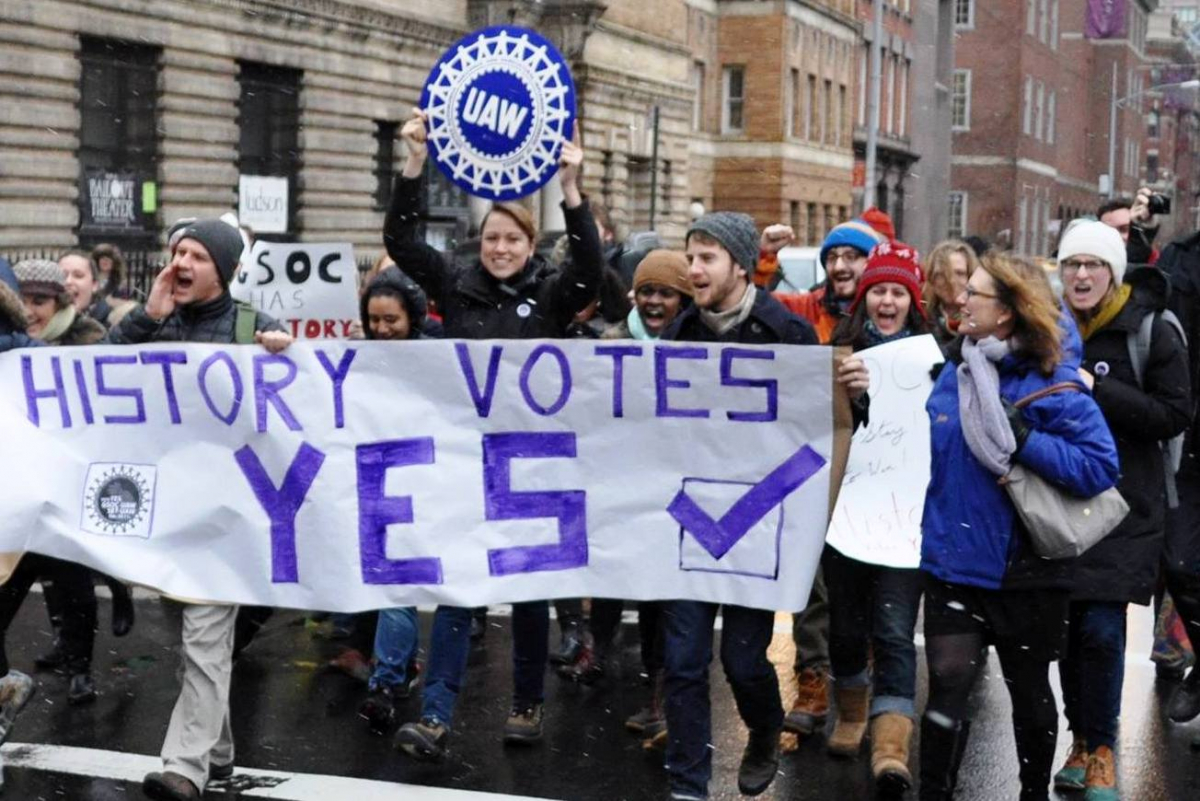 It took eight years of struggle, but NYU's graduate employees re-authorized their union, bigger than ever, December 11. Despite inaction at the Labor Board, the university finally agreed to recognize the union after pressure from workers, faculty members, and politicians. Photo: GSOC-UAW.

Victory cries rang out across campus the night of December 11. Tears of joy were shed.

This makes NYU once again the only private university with unionized graduate employees.

The Graduate Student Organizing Committee/Science and Engineers Together (GSOC-UAW)—which brings together two organizing drives across NYU’s campuses—is affiliated with the United Auto Workers and includes more than 1,200 graduate employees.

“We hope this inspires graduate employees at all universities to organize for their rights,” said Brady Fletcher, a PhD student in Cinema Studies.

GSOC and UAW made history in 2000 when they won a precedent-setting case that recognized graduate students as employees under national labor law. The decision set off a wave of organizing at private universities.

But administrators quickly allied against graduate employee unions—and Brown University, with support from several major private universities, won an appeal that overturned NYU’s case in 2005, under the Bush National Labor Relations Board.

In its decision, the NLRB reasoned that the labor performed by graduate assistants was part of an educational process, over which faculty and administrators should maintain control. The principle of equality of bargaining power, the Board ruled, was ill-suited to the realm of higher education.

With employers no longer legally obligated to recognize graduate employee unions, unionization attempts at many schools were quickly busted. Organizing committees disbanded. Ballots from a union vote at Columbia University were impounded. And NYU—which had settled a first contract with its graduate employees in 2001—refused to bargain another contract.

In fall 2005, NYU graduate workers decided—by an 85 percent majority—to strike to demand recognition. Determined to break the union, the administration threatened international students, spied on faculty emails, and refused to rehire anyone who didn’t leave the picket line.

The strike was called off in May 2006, but graduate employees continued to organize and demand recognition.

For the last eight years, graduate employees at NYU have been living with the consequences of not having a union. Fletcher says employees lost a voice just as health care costs increased sharply, new fees were imposed, and tuition remission was withdrawn for some.

Some public universities have long had graduate employee unions. “By having contracts that clearly specify childcare benefits, paid sick leave, and guaranteed tuition remission, unions at public universities opened up the academy beyond the elite, to women, people of color, and other groups that had previously been excluded by the paternalistic authority of university administrators,” Noss explained.

But private universities have actively campaigned to maintain their power to dictate working conditions unilaterally.

After President Obama took office in 2009, graduate organizers at NYU decided to re-petition the NLRB, asking it to reverse what they saw as a politically motivated decision.

Though the regional board quickly issued a decision favorable to GSOC-UAW, it required approval from the NLRB. Graduate employees waited in limbo for more than three years for a decision.

With political problems plaguing the Board, graduate students pondered alternatives.

“The health care cuts were a wake-up call,” said Darach Miller, a PhD student in Biology. “We couldn’t keep waiting for a national decision when NYU could cut something else without warning… A lot of us realized that NYU can’t be trusted.”

Over the course of the last academic year, GSOC-UAW gathered 1,000 signatures on an open letter to the university and a petition to lower health care costs, as well as 250 signatures from city and state elected representatives.

Meanwhile, faculty members were putting increasing pressure on President John Sexton over his expansion plans, both in New York City and at campuses in Abu Dhabi and Shanghai. Faculty from several schools within NYU voted to affirm no confidence in his leadership.

As graduate employees ratcheted up the pressure, NYU approached GSOC-UAW in February with an offer: the university would recognize collective bargaining rights for a subset of teaching assistants at its flagship Washington Square campus—but only if the union would exclude all research assistants (RAs) and all grad employees at the recently acquired NYU-Poly campus in Brooklyn, as well as agree to refrain from organizing RAs for at least 10 years.

In November, NYU tried again with a better offer. Through a series of conversations, the union and the university reached an agreement.

NYU would respect the right of all graduate employees at both Washington Square and NYU-Poly—except RAs in the hard sciences—to vote for a union. The bargaining unit specified in the agreement covers more than were covered under the first contract with NYU.

Significantly, the administration and faculty would remain neutral on the issue during the election. And if employees voted for representation, the university would immediately recognize the union and start bargaining.

The question of research assistants remains a point of contention. Academic research in the hard sciences is tightly linked to industry—particularly because of the 1980s Bayh-Dole legislation that allows private patents to be claimed from publicly-awarded research funds. Private universities seem intent on making sure unionization does not extend to researchers in the hard sciences.

As part of the agreement, the union would withdraw its petitions from the NLRB.

After consulting with graduate employees in every major department, organizers ultimately made the decision that waiting on the political waffling of the NLRB had not proven to be a successful strategy. It was neither clear how the Board would rule on the composition of the bargaining unit, nor guaranteed that the Board would rule at all.

Foregoing the possibility of setting a legal precedent, organizers instead sought to demonstrate the power of building from the bottom up.

“Withdrawing the petition from the NLRB was a tough decision,” Noss said. “But we ultimately made the calculus that we didn’t need to wait to for permission from the NLRB.”

“While we would still like to see the Brown University decision overturned,” said Julie Kushner, director of UAW Region 9A, “we would also hope that university administrators would see this agreement as a way to develop productive relations with graduate employees seeking union representation and follow NYU’s lead on neutrality.

“We know from the excitement among the workers at NYU that this agreement will be looked to as a model by graduate employees at other universities.”

Meanwhile, graduate employees at other private universities are re-evaluating their tactics for organizing. Molly Cunningham, a graduate employee and an organizer with Graduate Students United at the University of Chicago, said the victory at NYU has energized graduate workers there.

“GSOC's victory has reinvigorated our commitment to keep up the work of building our union, with or without an NLRB ruling,” Cunningham said.

After a long semester, organizers at NYU are looking towards bargaining.

And for research assistants in the hard sciences and engineering, the fight is far from over. “Those left out are going to have to keep pushing forward on the RA issue,” said Miller, who is part of the group that was excluded.

Matt Canfield is a fifth-year PhD Candidate in Anthropology at New York University and an organizing committee member of GSOC-UAW.