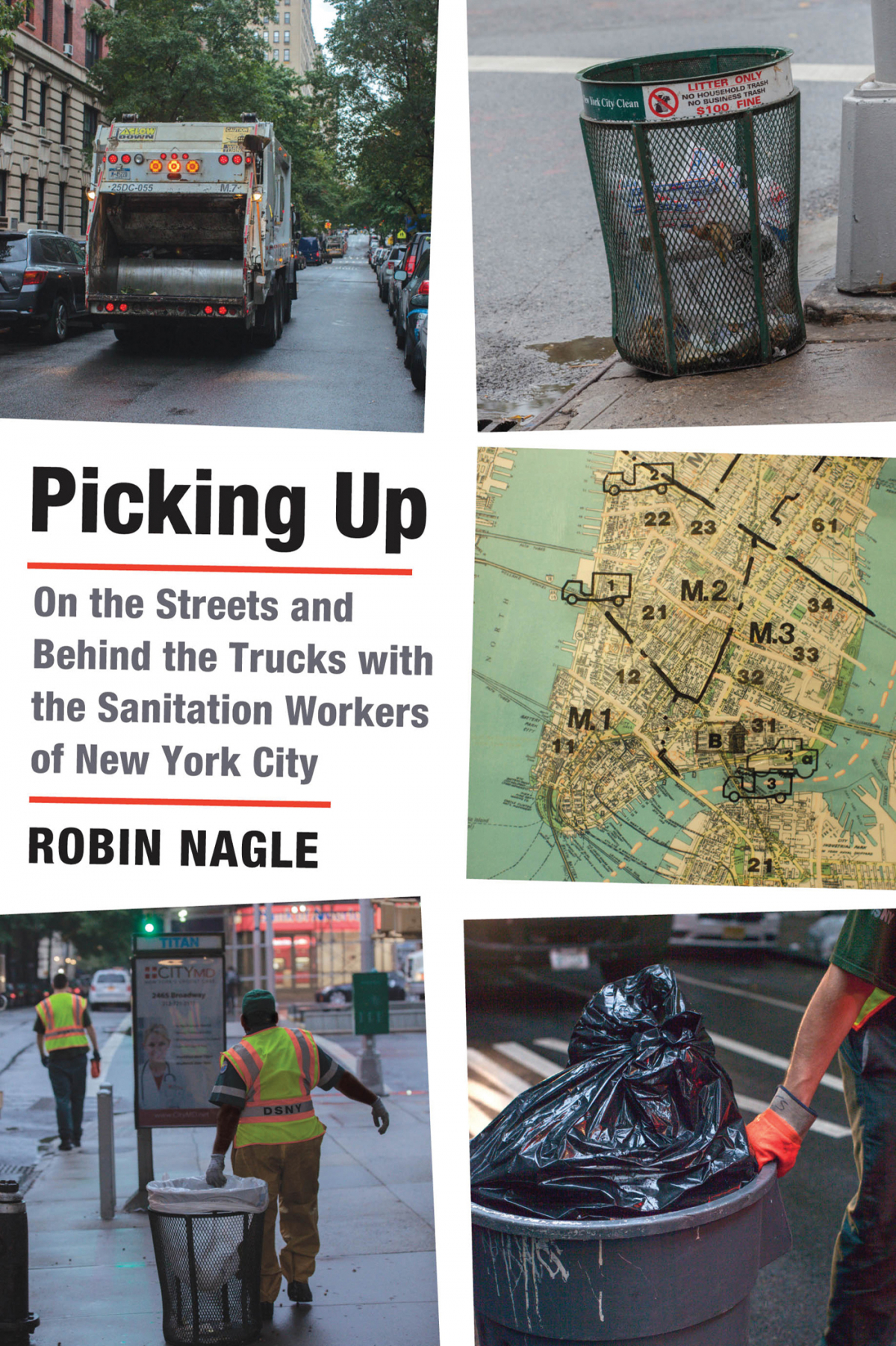 Picking Up: On the Streets and Behind the Trucks with the Sanitation Workers of New York City, by Robin Nagle (Farrar, Straus and Giroux, 2014).

With all the right-wing trash talk about unions and working men and women, it’s refreshing to pick up a book that lovingly and accurately documents the dangerous work of an overlooked group─sanitation workers. In Robin Nagle's new book, Picking Up: On the Streets and Behind the Trucks with the Sanitation Workers of New York City, we discover a treasure trove of information about this often-maligned occupation.

Nagle has been anthropologist-in-residence at the New York City’s Department of Sanitation—a position she invented—since 2006. She first developed a fascination with all things sanitation as a young girl. While out on a hike with her family she came upon a pile of trash left by thoughtless campers. What kind of people would show so little regard for the woods and streams she loved? She began to notice trash in her neighborhood. She wondered where it went once it was picked up.

Decades later, Nagle followed her interest in trash, talking her way into the inner workings of New York Sanitation. She secured a part-time position and became a driver of one of the big street-cleaning rigs. She also spent many hours accompanying sanitation workers on their rounds. From her work experience and laborious research, Nagle has documented the history of the city’s sanitation department.

The first sanitation workers, she reveals, were slaves. We learn that in the 18th and 19th century the stench of the city’s refuse was so strong, sailors and passengers on boats heading for New York could smell its stench six miles off shore. In the poorer neighborhoods, trash was ever-present and piled up knee-deep.

But in 1895, during the reform period, the mayor hired former Union Army Colonel George Waring, Jr., as Commissioner of the Street Cleaning Department. Waring threw out the men hired under patronage practices and instituted a strict military discipline for the replacements. He put them in sharp white uniforms and armed them with rolling trash bins with brooms attached—a practice used until late in the 20th century.

Twice as Deadly as Police Work

Nagle debunks several myths about sanitation. She points out that the mortality rate of sanitation workers on the job is roughly double that of firemen and police officers. Death by vehicular accident—including being run over by a sanitation truck—is far more common than a police officer being shot on duty.

Following a typical two-person sanitation team on their morning rounds, we see firsthand how some New Yorkers openly insult sanitation workers. They honk their horns and curse if a sanitation truck delays their car—not appreciating that, without the sanitation department’s daily rounds, in a matter of days the streets would be overrun by refuse. And rats.

We also learn that snow preoccupies the leaders of the sanitation department year-round. Teams review their plans and practice snow removal techniques all year. A big storm is the department’s greatest challenge; when they clear the streets after a storm has blanketed the city, every member feels a special pride in a tough job carried our with precision and effectiveness.

Picking Up, written in a non-academic style, is a worthy addition to working class and urban studies.

Tim Sheard is the senior editor of Hard Ball Press, dedicated to publishing and promoting working class literature, and the author of the Lenny Moss mysteries.

Related
Review: Don’t Bleed in the Shark Pool »
Review: Learning from an Older Generation of Troublemakers »
Review: On the Line: A Story of Class, Solidarity, and Two Women’s Epic Fight to Build a Union »
Review: How Labor Can Stop ‘The Privatization of Everything’ »
Review: White Workers Who Buy into Racism Are Shooting Themselves (and Everyone Else) in the Foot »