Video and Review: Down the Up Escalator 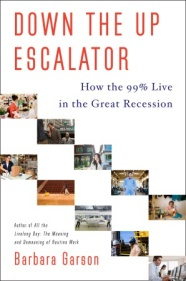 Hundreds of “put a human face on the economic toll” stories appeared during the Great Recession. Many reporters chose middle-class protagonists—by which I mean, not working-class. They wrote about managers, professionals shocked by the notion that they could ever be let go, disoriented by their descent, stunned that no one wanted them.

That was the news: that not just working stiffs could get laid off. People like you, middle-class magazine reader, were not safe.

Some of Barbara Garson’s subjects are middle-class, too; a few are even rich; others are workers. They all had something before the 2008 recession—a job, a house, or savings—and they all lost that something. Down the Up Escalator is the story of how they coped—with their human faces, yes, and loss of face, and loss of nerve and unwarranted optimism.

But Garson also explains the whole securitized, derivatized implosion of the economy in a way that’s easy to follow and puts the blame where it belongs.

To publish in 2013 is a little late—others have done this explanation already—but if you were too shell-shocked to pay attention at the time, and if you want your economics leavened with an entertaining dose of humanity, Garson is your guide.

One person we meet Garson calls “the living cliché of this recession”: a laid-off hedge fund manager. His wife still works at a different hedge fund, but he’s saving money by walking the dog himself rather than paying a dog-walker. When Garson tells him about an upscale retailer who’s eliminating commissions and switching to an all-part-time staff, the guy approves: “Some of the most innovative businesses and business theories have come up during tough times,” he says.

That outlook is why they pay—paid—him the big bucks, as a stock picker.

Another guy, an unemployed banker, had created the bundles of mortgages that helped bring down the whole house of cards. Gus says his work created “a lot of value,” meaning profit. “There was no sense asking him about social value,” Garson observes. “You can’t undo a master’s in business administration in one afternoon.”

Although the reader gags at the callow and callous unemployed like these, it’s fascinating to see how their minds work. Bank loan officers and heiresses give us insights into the human decisions of the 1%, or at least the 10%. And we meet people much further down who believe, against all the evidence, that they can make speculation work for them.

Here’s Zita San Antonio describing her immigrant mother: “She’s like a lot of people who buy into the spirit of capitalism but don’t have the capital. She’s always looking for the big chance. But she’s not from the class that will hear about the next pyramid scheme toward the beginning. She’ll never be ‘inside’ enough to get out in time.”

“Getting out in time,” when prices are highest and before the bubble bursts, is what it’s all about, of course. Take it from Alan Greenspan: “It’s not that the people [the ones who created the toxic assets] were dumb: they knew precisely what was going on. The vast majority of them thought that they knew when to get out.” Each individual knew it was a Ponzi scheme, but thought he could beat the system.

The recession was V-shaped for the rich, Garson shows throughout the book—they went down, they went back up. It was, and continues to be, L-shaped for everyone else—we went down, and we’re still flat-lining.

Those who’ve read Garson’s earlier books (see below) are fans partly because of her chatty, self-deprecating tone, the way she inserts her own knowledge, lack thereof, personal history, and reactions into the story. It keeps us engaged as we’re slowly educated about how the bankers and their allies crashed everything. We also get some insights into why there are no crowds with pitchforks surrounding the Federal Reserve.

Garson takes a lot of time in between books, partly because she has no interest in getting rich herself. If you look at the list, you’ll see that over the years she’s chronicled the steady worsening of our work lives as the 1% worked their abstract magic on our jobs. I’m eager for her book that goes behind the scenes when we finally do pick up the pitchforks.

To find out what happened to Down the Up Escalator’s many often hopeful characters, go to downtheupescalator.com.

Garson’s earlier books are:
All the Livelong Day: The Meaning and Demeaning of Routine Work
The Electronic Sweatshop: How Computers Are Transforming the Office of the Future
Money Makes the World Go Round: One Investor Tracks Her Cash through the Global Economy.