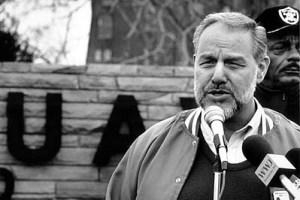 A conference October 11-13 will honor Jerry Tucker, a hero in the troublemaking wing of the labor movement, who passed away last year. He is pictured campaigning for president of the United Auto Workers in 1991 as part of the New Directions Movement. Photo: Jim West/jimwestphoto.com.

Eleven months ago the labor movement lost Jerry Tucker, my friend since the ’80s. Jerry had a bad ticker, and I always worried it would fail him, and us, but it was pancreatic cancer, the same villain that felled Tony Mazzocchi, that carried Jerry off. I remember when he found out the bad news—he was full of praise for the worker at his local post office who’d told him, “You’re looking yellow.”

I always remember Jerry’s turns of phrase. All there was to organizing, he said, was “you call a meeting and you make a list.” And then you get “more hands on the plow.”

Next month people who learned so much from him, and a new generation that wants to, will gather in his hometown to build the struggles Jerry was part of and spent his life leading. We’ll honor Jerry, yes, but it’s a conference for action—as he would have insisted.

Veterans of all the fights Jerry was famous for will be there:

And I have no doubt that many others from less famous battles will show up to tell amazing tales—and strategize. Register for the October 11-13 conference in St. Louis here. You can register for a hotel room there, too.

The conference will feature music by Anne Feeney and Elise Bryant, a poem by Gregg Shotwell, and a song written by Gene Bruskin.

After veterans of Jerry’s fights from the ’80s through 2012 chime in, we’ll hear from others on the front lines: Chicago teachers, Walmart warehouse workers, fast food and domestic workers, members of a Bus Riders Union, immigrant rights activists. Small groups will “Remember Jerry, Remembering Ourselves,” with time to talk about where we are in our lives today: reminiscence, observation, and openings.

Bright Light in a Dim Era

At the 2012 Labor Notes Conference Jerry was named, officially, a Troublemaker. He spoke to the conference via video, though he was in a world of pain.

Here are excerpts of some stories and appreciations of Jerry that people were eager to write just after his death. (For the whole thing, go here.)

Jerry was one of those bright lights in a dim era. As working people and their unions seemed to face one setback after another, Jerry came with a new strategy or tactic in hopes of reversing the trend.—Kim Moody, former Labor Notes director

Jerry was like family to me. As the grandson to Victor Reuther, I can recall countless gatherings at the family home on Porter Street in Washington, D.C. This was the epicenter of passionate stories and debate, with Jerry in the thick of it….While I was too young to understand the context, I recognized that Jerry Tucker was one of my grandfather’s closest friends and together they cared deeply for community and were driven by the righteousness of a cause.—Sasha Reuther, filmmaker, The Brothers Reuther

In the mid-1980s it was downright shocking. The labor movement was completely disoriented. Out of this chaos arose a consensus from national leaders. “If you can’t beat them, join them,” they told us.

Those of us who wanted to fight back felt helpless. The tactics honed in easier times—the wildcat strike, militant shop-floor resistance, a strategic strike against a single plant—were worse than useless against a determined union-busting employer.

Along came a guy named Jerry Tucker. “Don’t let the bastards provoke you into striking!” he counseled. “Stay inside. Learn to ‘run the plant backwards.’ Trust the knowledge and ingenuity of the rank and file to figure out how to make the plant ungovernable while mobilizing new forces and new allies to support you at the bargaining table.”

Jerry Tucker made his bones in the Moog Automotive campaign in 1981 where he led an “inside game” to win a decent contract for 1,200 workers. For those of us looking for a way to fight back, his methods were like a light in the darkness….

Jerry was no idle dreamer. He loved to quote his old civil rights buddy: “Remember, son, they be scheming while you be dreaming.” Whether it was a blockhead on the plant negotiating committee or the president of a national union, he refused to suffer fools gladly. Yet he had infinite patience and regard for anyone who wanted to stand and fight for workers.

Over the years, hundreds of activists contacted Jerry for advice and support. They were people like UAW activist Gregg Shotwell, who met Jerry in 2003. “Jerry never told me what to do,” remarks Shotwell, “but after talking with him I felt I knew what I had to do next. That’s the gift of a true organizer.”

Jerry’s family, his wife Elaine and his daughters Tracy, Nicole, and Cynthia, asked that those who wished to contribute in Jerry’s name do so to the Labor Campaign for Single Payer.

Elly Leary, who was a member of two UAW locals and a leader of New Directions, wrote:

Jerry didn’t do for workers, but created space for workers to analyze and strategize. Rather than striking, especially in times when scabs were prevalent and economic conditions poor, Jerry chose another strategy that asked workers to use their brains, not just their labor power. And get full pay for doing it.

But my favorite accomplishment of Jerry’s was that he was the only white player in the local Negro Baseball Sandlot league in St. Louis. Rest in peace, shortstop and playmaker. It will be a long time until someone like you comes along again.

And Dean Braid, retired from General Motors and a former education director of UAW Local 599 in Flint, Michigan, had this to say:

I was first introduced to Jerry Tucker in 1989, at a huge rally in Pontiac, Michigan, titled “A New Beginning.”

The UAW had begun to accelerate a historic change in direction with its relationship with management. The promise was that a new working environment named “jointness,” with equal sacrifice from management and union members, would let both entities win. Many rank-and-file and elected leaders felt we were going down a dangerous path that would ultimately destroy the basic principles the UAW was founded on.

Jerry was one of the speakers. He was former director of UAW Region 5. In 1986 his election had been stolen and a two-year legal battle had won a court-ordered new election which Jerry won handily. The rally’s final speaker was UAW founder Victor Reuther, who had joined the dissidents.

This was a new beginning for the UAW, to step away from the one-party system run by the Administration Caucus and to promote real democracy through honest debate. It was the beginning of a national movement within the UAW, to be known as the New Directions Movement. Jerry was the catalyst to bring these leaders together….

In the mid-1990s, during the brutal A.E. Staley workers’ struggle, Jerry was hired as a strategic advisor. Not only did he educate members in the safety of their local union hall, but he also led militant rallies marching down the streets of Decatur, Illinois. I witnessed Jerry on the front line at the gates of the Staley plant when he and others were maliciously pepper-sprayed directly in their eyes by police in full riot gear. That day I saw how committed Jerry was to the rank and file and what they believed in. He literally put his life on the line.

Jane Slaughter is a former editor of Labor Notes and co-author of Secrets of a Successful Organizer.
Related
Rest in Power, Tim Schermerhorn: Leader of New York Subway Union Reform Effort »
Thanks for Letting Me Do the Easy Part »
35 Years of a Not-Boring Labor Movement »
Remembering Jerry Tucker »
Remembering Legendary Troublemaker Jerry Tucker »