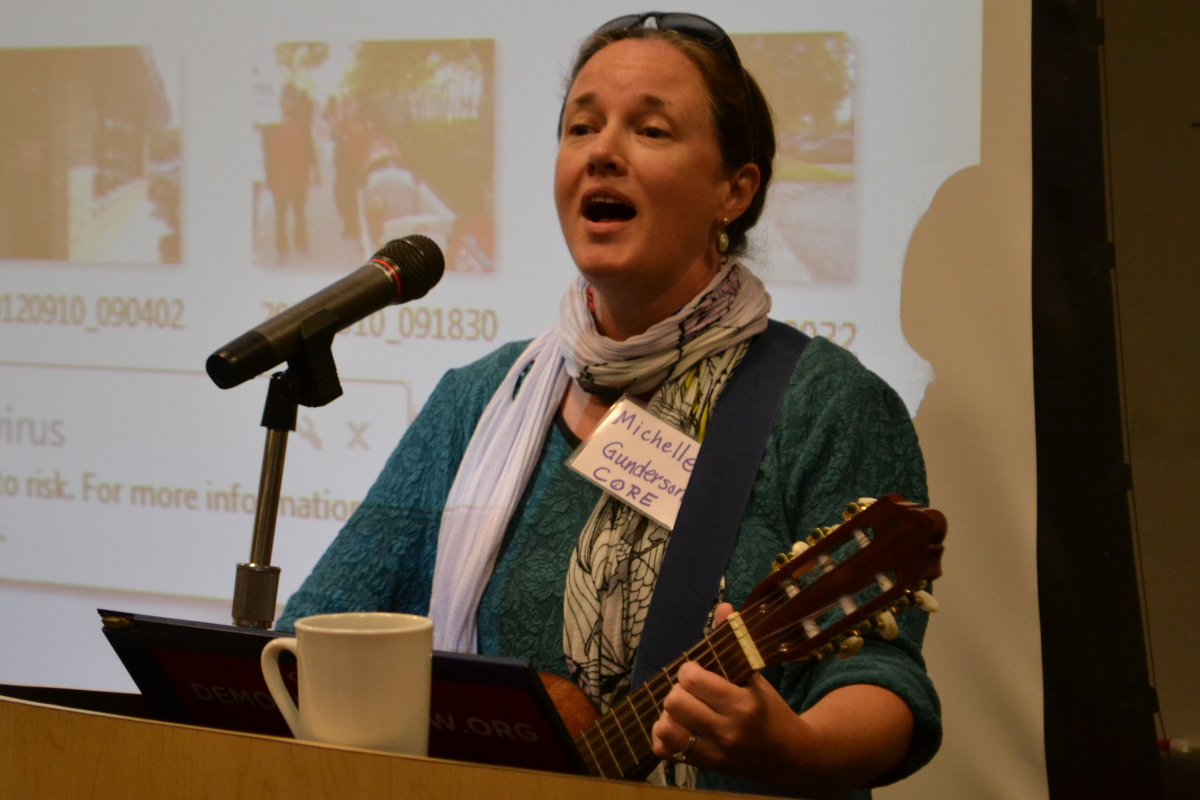 “Woke up this morning with my mind on education,” sang Michelle Gunderson, one of the organizers of a conference that brought teachers from around the country together to strategize. Photo: Samantha Winslow.

Teachers from across the U.S. gathered in Chicago over the weekend to share strategies for strengthening their unions to battle the seemingly never-ending attacks on public education.

A conference for social justice unionism, the host organizers called it. They were from the Chicago Teachers Union’s Caucus of Rank and File Educators (CORE). Many teachers see the group, which won office in 2010 and led last fall’s nine-day strike, as a model.

CORE and many other participants emphasized that teachers have to ally with their students and communities to advocate for quality public education—and show the public that “the people who care about your children are working with your children,” said CTU President Karen Lewis. “They are not in the state capitals.”

Teachers and union leaders from Chicago, Newark, St. Paul, New York, Los Angeles, and other cities were abuzz. They got down to nuts and bolts—everything from how to get parents involved at the school site, to how to talk to your co-workers, to how to fight mayoral control. And they talked about such big-picture questions as, “How do we combine bread-and-butter union issues with social justice and education justice?”

“CORE was definitely a blueprint for other caucuses around the country and the world,” said Shannon Coleman, who came with a group from Newark, New Jersey. “I was really in awe to see how they organized their members and aligned their members with the community, how they got a majority of their members involved.”

Coleman is on the steering committee of the NEW caucus, which recently won a majority of seats on the Newark union’s executive board. Seeing how many teacher groups share similar goals, “it clicked for me that this was the mission of our caucus,” Coleman said. “I could see what type of movement was starting to build.”

“The tide is turning” against corporate attacks on teachers and public education, Lewis declared to loud applause, as she welcomed the more than 100 teachers on Friday.

CORE hosted a similar conference in 2011.

Nick Faber, an officer at the St. Paul Federation of Teachers in Minnesota, said his union has been inviting parents and community members to attend bargaining sessions this year, to show how their interests are aligned.

The union has modeled some of its strategies after CTU’s. The influential 2012 report The Schools Chicago's Students Deserve was a template for a similarly named St. Paul report about the union’s and the community’s education priorities. At least a half-dozen teacher groups at the conference said they were working on similar reports for their own cities.

“What we can see from the conference is that there is already an incredible amount of social justice union activism, at the grassroots level, in locals across the country,” said CORE leader Xian Barrett, who helped plan the conference.

Last year’s strike in Chicago resonated even around the world. Lewis brought a surprise guest: Beth Davies, president of the National Union of Teachers in the U.K. Its 350,000 members in England and Wales are preparing for a national strike. They too were inspired by CTU.

Collaboration and support among union locals and caucuses was a repeated theme. “We need to think about how we work together so we are not constantly reinventing the wheel,” Lewis said.

As the conference began, Philadelphia’s superintendent was announcing that a budget shortfall might keep the district from starting the school year on time next month. Teachers in both Chicago and Philly have fought massive layoffs and school closures this year.

“The lesson from Philadelphia and Chicago is that, even with strong [local] union activists, it is not enough to defeat the corporate education reform efforts,” Barrett said. But if we come together and collaborate we can win.”

Teachers concluded by discussing ways to collaborate: on national education policy, the overemphasis on testing, working with parents, and getting more teachers involved in union campaigns.

They also compared notes on the upcoming March on Washington. Working with National Nurses United and other organizations in Chicago, CTU is organizing a group to travel to D.C. for the 50th anniversary of 1963’s famous March for Jobs and Freedom.

In the spirit of the original march, which called for jobs and racial justice, organizers want to raise those issues again—this time highlighting school closings, foreclosures, and the recent acquittal of George Zimmerman, who shot and killed unarmed African-American teenager Trayvon Martin and sparked national outrage. Teachers union leaders in D.C. also plan to participate in the march, as will many other national and local unions.

And it wouldn’t be a labor event in Chicago without a visit to the Haymarket Memorial, where students performed a series of readings to commemorate the events at Haymarket Square. Conference organizer Michelle Gunderson urged teachers to remember the fight for an eight-hour work day and their role in labor history.

Modifying a civil rights movement hymn, she sang in one conference session, “Woke up this morning with my mind on education.”

Samantha Winslow is co-director of Labor Notes.samantha@labornotes.org
Related
Chicago Teachers: Notes from a Fighting Union »
Before Your Strike Vote, Consider a Practice Strike Vote »
Ten Years Ago, Chicago Teachers Gave Us All a Jolt of Hope »
This Year, Let's Coordinate Our Contract Fights to Bargain for the Common Good »
As Omicron Rages, Teachers and Students Fight for Safety Measures in Chicago and Elsewhere »