Bakery Workers Speak Out after Immigration ‘Silent Raid’ in Oakland 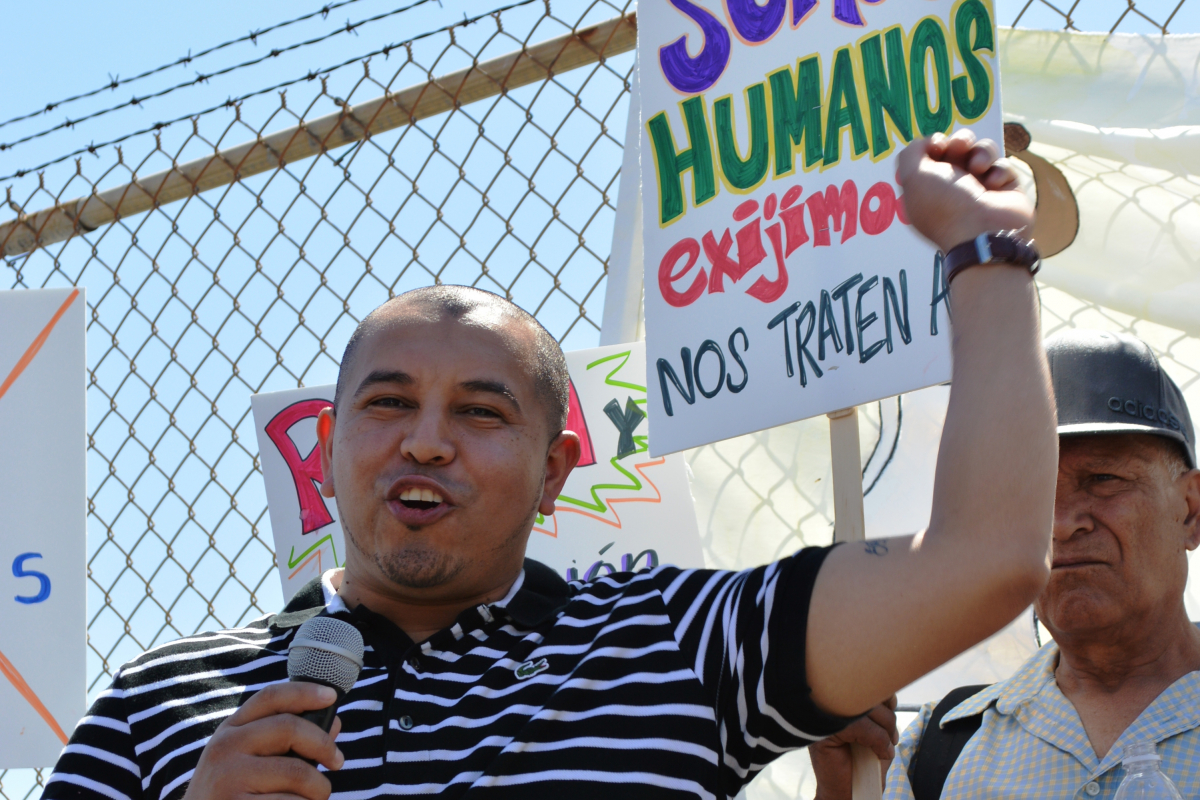 It seems no coincidence that 125 undocumented workers at an Oakland industrial bakery were suddenly fired, shortly after they started asking for better wages and conditions. Some had worked there for decades. Photo: Dignidad y Resistencia Latina.

For 125 undocumented workers at Oakland’s DoBake industrial bakeries—some making $9.40 an hour, after decades at the company—their sudden mass firing was devastating.

But it has also proved infuriating, politicizing, and galvanizing. Many have organized into a committee, and their aims include a moratorium on all “silent raids” nationwide until immigration reform is implemented.

“Those same companies that during all this time have used us to make millions in profits by paying us low wages,” said ex-worker Noemí Menjivar, “are now taking advantage of our legal status and have sold us out.”

At a May Day march in the Fruitvale district of Oakland, workers risked further exposure to share their struggle against the I-9 audit that ruined their livelihood, one of the latest in a wave of such audits sweeping the country.

Forty delegates to the Alameda County Central Labor Council signed a petition Monday, presented by DoBake ex-workers and supporters, supporting the demand to freeze all immigration audits and oppose the resulting layoffs.

I-9 forms are filled out by each newly-hired employee to show eligibility to work in the U.S., and kept on file by the employer. If Immigration and Customs Enforcement (ICE) audits the forms, it will inform the employer which workers’ forms seem not to be in order—and may threaten fines for continuing to employ those workers.

Get Rid of Troublemakers

When DoBake facilitated the raid, perhaps managers were eager to rid themselves of a troublesome element. Some workers who’d been there 10, 15, or even 20 years were starting to ask for better wages and conditions after their contract expired in November. Firings began in January, during the lapse between contract expiration and new negotiations, which were scheduled to start April 29.

The workers’ union, meanwhile, didn’t make a peep about the audit—didn’t even warn workers the firings were coming, though the permanence of the union is jeopardized by the loss of active and senior members. Bakery (BTCGM) Local 125 reps admitted they knew about the audit, but said nothing.

When 50 workers pressed their reps on why they didn’t at least call a meeting, the response was: “Each worker’s situation is different.”

Fifteen ex-DoBake workers were joined by 50 community members, including the Dignidad y Resistencia Latina coalition and the Brass Liberation Orchestra, to stage their first public action right outside the factory gates April 29. They said it was the beginning of what could become a protracted struggle for reinstatement and severance pay, as well as a broader statement against the “silent raids” that have escalated.

The workers are conscious that the laws do not favor them; nevertheless, they have chosen to publicly fight for their dignity.

In 2012 ICE reached a record high of I-9 audits: more than 3,000, compared to 250 in 2007. Locally the DoBake workers are joined by former workers of Berkeley Pacific Steel, who were similarly fired by the hundreds, possibly in retaliation after their union successfully went on strike for higher pay and to retain medical benefits.

The 200 DoBake workers had been part of BCTGM since 2006, Menjivar said, but the union had done nothing to improve conditions.

“Since January of this year the bakery has taken on the task of firing workers in small groups of five to 10 people each week,” she explained, “using as justification a supposed federal audit conducted in 2010 and then in this year.”

The firings were “conducted strategically,” she said, with the first to be fired the “general employees,” so that key employees and line managers or specialists were kept on in order to train new workers.

“Today in this moment,” Menjivar said at the April 29 action, “a moment of change in this country, they implement tools like I-9 or E-Verify to leave our families without our main source of income.” (E-Verify is an Internet-based system that compares information from the I-9 with Social Security and Department of Homeland Security records.)

“The government of Barack Obama has broken the record for deportations.

The authors belong to Dignidad y Resistencia Latina (Latino/a Dignity and Resistance), a San Francisco Bay Area coalition of Latino organizations and individuals. Their campaigns have supported both union and non-union workers in steel, licorice, groceries, and now industrial baking.

For a story of a more proactive union response to I-9 audits, read how Service Employees Local 26 in Minneapolis won contract protections for immigrant members—and spread its gains to non-union workers.