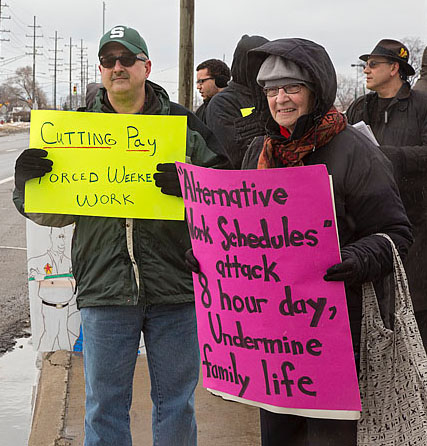 Workers protested a back-breaking new work schedule imposed by Chrysler on Monday at a Detroit-area plant. A main organizer of the February 28 picket was soon fired. Photo: Jim West.

Update, April 16: Alex Wassell, fired by Chrysler for organizing opposition to the 10-hour day, is being reinstated.

Chrysler started what workers at its Warren Stamping Plant are calling the “Awful Work Schedule” Monday—minus one of the local union’s chief agitators against the new plan.

Skilled tradesman Alex Wassell, a 20-year employee with an unblemished record, was suspended two days after workers held a spirited picket in front of the plant a mile north of Detroit. A few days later he was fired.

Wassell had been a leader in organizing to stop implementation of the Alternative Work Schedule (AWS), which entails four 10-hour days at straight time, with two-thirds of the production workforce scheduled every Saturday. Half of those workers must switch back and forth between day and evening shifts each week.

Chrysler claims it needs the “Flexible Operating Pattern” to wring more auto stampings from the workforce, but workers say the plant could run just as many hours with three eight-hour shifts per day. The FOP makes the work cheaper by cutting break and lunch times and eliminating overtime pay for Saturdays.

Members of United Auto Workers Local 869 had signed petitions, turned out by the hundreds for union meetings, texted international union and company leaders, and worn “Drop the FOP” stickers in the plant. At the picket line, one sign called the AWS “All Workers Screwed” and depicted two men with shovels—Chrysler and its parent Fiat—burying a third man, the UAW.

Wassell, seen as a leader of the effort, had written articles for Labor Notes’ magazine and website about the hardships the schedule would cause.

The company claimed Wassell had violated one of its “standards of conduct”: “engaging in, participating in, aiding or approving conduct constituting or appearing to constitute a conflict with the interests of the Company.” The National Labor Relations Board is increasingly finding that such vague injunctions violate workers’ rights and cannot be enforced.

Of course, many unionists would argue that the interests of the company and the interests of workers are automatically in conflict—and that there is no better illustration than Chrysler’s willingness to turn workers’ lives upside down to increase its profits.

UAW reps hint that the decision to fire Wassell came from above the plant level, apparently to send a message that opposition to the new work schedule will not be tolerated.

Management had to reach for a pretext: A Detroit News article about quality issues at a different Chrysler factory—a truck assembly plant—quoted Wassell as saying, "They already had some problems with the quality. The morale is terrible, so it's not going to get any better." That article came about when some whistleblowers at the truck plant leaked documents to the News. Later, though Wassell had nothing to do with the whistleblowing, Chrysler said he was suspended because of “the comments he made in the paper regarding the status of production at Warren Truck."

Both the American Civil Liberties Union and the National Lawyers Guild are supporting Wassell’s right to protest—as clearly outlined in the National Labor Relations Act. The Detroit News has run sympathetic coverage, with one article titled “Chrysler moves to silence workers.”

In the plant, as workers scramble to adjust to their new hours, plans are under discussion for a petition and a collection—but not another picket outside the plant.

Fellow skilled tradesman Jerry Miller says Wassell’s co-workers are “very upset” and feel the quality issue was “just something the company came up with.” Miller noted that Wassell was also one of the workers who opposed the skilled trades portion of the 2011 national contract, and its subsequent ratification by the International though workers had voted it down.

Another worker, Bob Glassman, reports, “There are people who never met Alex who come up to me and ask me, ‘What are we going to do to get this guy’s job back?’”

Related
How We Began To Bring the Mail Back »
Ballots Out in UAW Presidential Run-Off »
2022 in Review: Harsh Conditions, Good Surprises »
Challengers Win Big in UAW Elections; Presidency Headed to Run-Off »
Ballots Are Out in UAW Election, with Contrasting Visions of Unionism Up for Leadership »