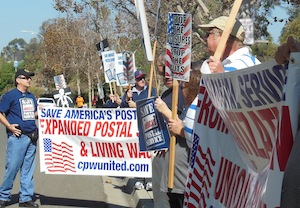 Postal workers and others protested the privatization of over 800 truck driver jobs on Halloween. They charge the Postal Service with using an environment-friendly excuse to contract out jobs that are currently done by American Postal Workers Union members. Photo: Kevin Cole, Communities and Postal Workers United.

The Postal Service is using environmental regulation as a fig leaf for its latest privatization ploy.

Postal workers, politicians, and community activists staged a Halloween rally yesterday outside Representative Darrell Issa’s office in Vista, California, calling for Congress to “carve the pumpkin, not the postal eagle.”

USPS plans to contract out all 840 of its California truck driver jobs, beginning this month, claiming it cannot afford to bring its vehicles up to state emissions standards. The regulations require older heavy-duty diesel trucks engines to be upgraded on a staggered schedule from 2012 to 2022.

The Postal Workers Union offered to pay the cost of retrofitting the trucks out of an existing fund jointly controlled by the union and the employer, but the Postal Service ignored the offer.

“They’re carving us up for private industry,” said Kevin Cole, Southwest California maintenance director for the AWPU and chief steward for the Anaheim processing and distribution facility. “They’ve basically allowed the security and sanctity of the mail to be trumped by cheap labor.”

USPS employs 7,000 APWU truck drivers nationally, carrying mail from processing plants to post offices. If the California cuts go through, members in other states fear their jobs could be next.

The Drive to Privatize

Issa, chair of the Committee on Oversight and Government Reform and one of the richest members of Congress, is spearheading the push to privatize postal work piece by piece. Oregon retired Letter Carrier activist Jamie Partridge calls him “the point man for the 1% agenda.”

The blow to the California drivers is yet another in a series of attacks on union jobs in the postal industry. The Postal Service began a three-phase plan this summer to close half the nation’s mail processing plants, where letters and packages are sorted. Issa is also pushing to close many rural post offices and eliminate Saturday delivery.

If unchecked, Cole says, the many-pronged cuts will send the whole public postal service into a “death spiral.”

The Anaheim branch of the grassroots coalition Communities and Postal Workers United (CPWU) organized the demonstration at Issa’s office Wednesday.

Speakers included local and statewide officials of the APWU and Letter Carriers, as well as Issa’s Democratic opponent Jerry Tetalman.

Cole and APWU State President Mike Evans went up to Issa’s office, where the congressman himself apparently stumbled upon them by mistake. Cole said Issa argued with the union officials for 20 minutes, cursing at them and complaining that door-to-door delivery is inefficient and postal workers refuse to retire.

National elected leaders on both sides of the aisle are advancing the postal privatization agenda. On this subject, “we don’t have a choice between the two major candidates for president,” Cole said. “I consider them to be the business party, both of them.”

Time is running short to stop USPS from “excessing” the California truckers. The union’s grievance hits arbitration November 27, but the Postal Service plans to start outsourcing jobs before that, on November 17.

“Once they move, it’s difficult to undo what they’ve done,” Cole said. The union has requested an injunction to halt the cuts. A hearing is scheduled November 9.

Partridge and others formed CPWU earlier this year to fight destruction of the Postal Service by building local community coalitions and planning direct actions. They’re working to overcome what they see as their national unions’ infighting and inside-the-Beltway mentality. The coalition, now active in 20 cities, staged a hunger strike in Washington, D.C. this summer and is calling for a march on Washington to save the postal service.

“Congress is stuck,” Partridge said. “Unless we catch the spirit of the 1970 postal strike, the Occupy movement, and the civil rights movement, we’re going to lose this thing.”

Alexandra Bradbury is the editor of Labor Notes.al@labornotes.org
Related
Letter Carriers Resist After-Dark Delivery »
Viewpoint: Climate Justice Must Be a Top Priority for Labor »
Letter Carrier: Air Quality Is a Union Issue »
Billionaires Can Have the Cosmos—We Only Want the Earth »
Detroit Postal Workers Push to Dump DeJoy and His Ten-Year Plan »