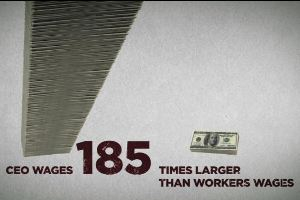 “It’s the Economy, Stupid” has been the mantra for election strategy since Bill Clinton. It’s the economy that sets the context of our lives. Directly it determines our standard of living. Indirectly it determines how safe we feel: crime goes up when people can’t get decent jobs.

But understanding the economy—how it works and how to control it—is difficult. Macroeconomics, stimulus, bonds, selling short, deficit, derivatives—these are not simple concepts.

We invited over some friends with a range of activist experiences to watch “Heist” with us. The film focused on a single memo written for the Chamber of Commerce in 1971 as a cornerstone of the entire worldwide economic crisis. We wanted to see whether “Heist” provoked a good discussion about the economy and whether it provided a framework for understanding what’s been happening to us.

It certainly did, on both counts.

As it turned out, “Heist’s” focus is not explaining the economy as much as it is explaining the giant shift in American politics. Going into the 1970s, the filmmakers say, our society and government seemed to share some fundamental beliefs: that we should regulate business and finance, that we needed a safety net for the elderly, the sick, and those hurt by economic shifts, and that unions were important to provide some balance.

“Heist” explains how, in the last 40 years, the dominant ideology and the role of government have shifted far to the right.

A Push to the Right

This shift wasn’t just the result of technological change, globalization, or some inevitable dynamic of the economy. The film documents a conscious political struggle by corporations and the wealthy to increase their power, increase the dominance of their ideas in society, reduce government regulation, and weaken unions and other opposition.

Most eye-opening was the section on the “confidential” Powell Memo written for the Chamber of Commerce in 1971. Lewis Powell, who two months later was nominated by President Nixon for the Supreme Court, lays out a program for the Chamber to lead the assault to defend business interests:

There should be no hesitation to attack the Naders, the Marcuses [Marxist philosopher Herbert Marcuse] and others who openly seek destruction of the system. There should not be the slightest hesitation to press vigorously in all political arenas for support of the enterprise system. Nor should there be reluctance to penalize politically those who oppose it.

Powell’s strategy for the Chamber was to take the struggle to advance the corporate agenda to the campuses, the media, the courts, and politics. It was to be a battle of both ideas and political power. Six conservative advocacy groups, including the Cato Institute and the Heritage Foundation, were created to do the ideological marketing.

But the campaign was not just about pushing ideas. It was also about changing the structure of the economy to increase both the power and the wealth of corporations.

“Heist” explains the primary target: to get rid of regulations on corporate power and flexibility. A prime example was the attack on the Glass-Steagall Act, which since the 1930s had forced a separation between commercial and investment banks. That separation prevented commercial banks from using insured deposits to underwrite private securities. When Congress repealed Glass-Steagall in 1999, it paved the way for the bankers’ spree of risky loans that led to the burst bubble, and misery for millions, in 2008.

Another goal was shifting the tax burden off the rich, in the name of the now familiar trickle-down economics and the idea that “the wealthy are the job creators.”

Getting lean and mean, corporations outsourced work and restructured industry to de-unionize much of what was left.

What makes this a particularly good movie on the political shift is that it does not pull punches. While the ideologues wrote the Republican platform, the film makes it clear that Clinton and the Democratic Congress bear plenty of responsibility for carrying out these policies. NAFTA, the repeal of Glass-Steagall, and monopolization of the telecommunications industry all had Democratic sponsorship.

“Heist” does all this with clear explanations, clever graphics, and good footage of CEOs as well as academics and politicians.

The film also attempts to point the way to a political alternative. It highlights the 2011 struggle in Wisconsin and the Occupy movement, which was at a peak as the film was coming out. It also shows the independent anti-corporate organizing of the Richmond Progressive Alliance, the political action group we belong to in Richmond, California (disclosure: we have cameo roles in the film).

“Heist” sums up this take-action section with Van Jones’s admonition that “there are only two kinds of power in the world: organized money and organized people.” The weakness of this part reflects the weakness of the current fight-back in America.

In our viewing group, the movie stimulated discussion. Some felt “Heist” made it all fit together. Others felt it opened new questions. Does regulation really work? Where was the labor movement in all of this? Is public funding of election campaigns really a solution? In the film, Senator Bernie Sanders speculates that President Obama was afraid corporate leaders would just refuse to invest—a strike by capital—if they sensed any government hostility to their interests. That sparked a lively discussion of the immense power of corporations over the government, way beyond their lobbying power.

For union members and community activists, “Heist” is a great way to start a discussion of the big picture.

Mike Parker and Margaret Jordan are active in the Richmond Progressive Alliance.

Related
Twenty-Hour Days, 100-Hour Weeks, No Lunch Breaks: An IATSE Member Talks Working Conditions »
Will the Stimulus Stop States From Slashing More Jobs? »
Interview: If Only Unions Had Managed to Organize the South, Could Trump Have Been Avoided? »
Review: Tell the Bosses We’re Coming »
Economics Brief: The Rise in Income Inequality in the United States »