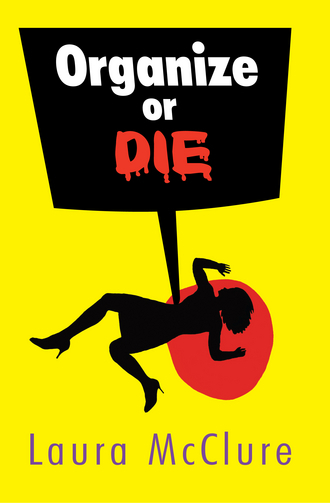 Many of us hesitate to read books, or watch movies, where we’re familiar with the subject matter, because it’s so painful when the author gets it wrong. Attorneys wince watching the many lawyerly TV shows, because it just doesn't happen that way.

But I wasn’t worried about Laura McClure’s new mystery set in a union organizing drive, because McClure used to write for Labor Notes. And she gets it right: the workers in her fictional campaign that’s disrupted by a murder are real people, with more than a few warts. It’s not all uplift and solidarity. Our heroine has a drinking problem. The worker who started the drive is a drunk and a racist. The fictional head of the state fed is a pompous egomaniac.

Other workers at the New Jersey printing plant that’s the target of the Industrial Workers Union are salt of the earth, and they’re the reason Ruth Reid agrees to step in when the original IWU organizer, Victoria Shales, is shot through the head 18 days before the election. “Victoria—she ran the whole campaign,” explains a worker. “She had all these plans—and we don't know what they were.”

Victoria, whom we never meet alive, is the least believable character in the novel. An organizer who plays her cards close to her chest and makes decisions without the committee—that’s credible. But an organizer with a closet full of $300 shoes?

We get to know the owners of Pantheon Printing better (two old brothers, not a hedge fund), and McClure is skilled enough to help us see why they resist unionizing their company so strongly: “Do you realize that when we started out, Sam and I went eleven years without a vacation? We gave our employees health insurance before we even got it for ourselves! Who are you to walk in here and tell us how our workers feel?”

We also meet company thugs, nervous workers, and a teenage niece who gets bitten by the union bug. We see workers pulling off a work-to-rule verging on sabotage as supervisors scramble helplessly. The result is realistic: firings all round.

There’s enough Scotch in Organize or Die to pickle a whole committee. Ruth’s long-term love affair with a married reporter is only one reason she hits the bottle so determinedly. But she’s just as determined to take the Pantheon workers to the victory line—and if that means finding out who killed Victoria, she’ll do that, too.

Organize or Die by Laura McClure, 2012, 317 pages. Order the paperback or download to an e-book reader at lauramcclure.org. Read the first chapter there, too.

Related
Review: How Labor Can Stop ‘The Privatization of Everything’ »
Steward's Corner: How to Think Like an Organizer »
Review: White Workers Who Buy into Racism Are Shooting Themselves (and Everyone Else) in the Foot »
Inside the Alabama Amazon Union Drive: An Interview with the Lead Organizer »
Draw the Line in Permanent Marker: Three Organizing Principles »