A Union Grows in Brooklyn 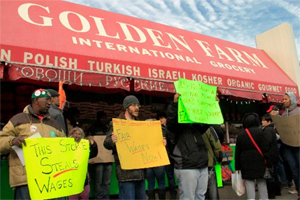 A community-labor alliance is backing Latino workers at small Brooklyn groceries as they fight for a union, using unpaid-wage claims and street action to pressure the boss. Photo: NYCC.

Community supporters are turning out once again at a small grocery store in the Kensington neighborhood in Brooklyn to aid workers fighting for their union.

Many of the supporters shop at the Golden Farm store—or used to, until they heard about the way the owner was treating the workers. For years the immigrant Latino workers at the grocery have been grossly underpaid and received no sick days or other benefits. Workers say they took home just $400 for working more than 70 hours a week.

The workers began organizing with NY Communities for Change, an ACORN successor group that has partnered with the Retail Wholesale union for the last year and a half to organize small Brooklyn grocery stores. Over the months of the campaign, community supporters helped distribute flyers in front of the store with a simple message: We live here, and we want quality jobs in our neighborhood and justice for all workers.

If the Golden Farm workers succeed, they will be the sixth Brooklyn grocery to win a union with the combination of back-wage lawsuits and community-worker collaboration.

The wave of organizing kicked off in earnest after about 30 workers at another Brooklyn supermarket, Master Food, won a $300,000 settlement over unpaid overtime and subminimum wages last October. That agreement also led to an election with RWDSU Local 338 and then a contract that won the workers paid vacation and sick leave.

At Golden Farm, the groups pulled off a week of action in April together with supporters that culminated with a 24-hour boycott called for by the workers’ committee. The store lost an estimated 60-70 percent of its usual business for the day.

The workers also filed suit for back wages and unpaid overtime—which resulted in a settlement of $100,000. And they pushed for a union election with Local 338, which was held May 2.

But the election has been mired by attempts of the owner, Sonny Kim, to derail the effort. By Kim’s own admission in Labor Board proceedings, his wife cast a vote in the election, despite not working in the store.

The union challenged several other votes because Kim attempted to include managers and others in the bargaining unit who are not regular employees at Golden Farm.

The case is under review by the NLRB. If the vote stands, about 20 workers will gain the right to collectively bargain. A decision is expected any day.

While the fate of the union at Golden Farm now rests with the NLRB, the need for continued community support still exists, perhaps more than ever. Without a contract, workers remain vulnerable to the whims of a hostile owner, especially those who have been vocal proponents of the union effort and the lawsuit to win back wages.

Members of the community are re-mobilizing to remind Kim that they are still here, supporting workers’ rights.

There is also something else at stake. The campaign has brought many people in the neighborhood out of our houses and into the street (and each others’ homes).

For many of us, workers and community members alike, this campaign has become a way of working together to break down the class boundaries that often divide us. At a recent meeting, one worker thanked supporters for simply saying hello to him as they walk by the store, noting that before this campaign he often felt invisible.

Brian Pickett is a theater teacher and writer. He has lived in the Kensington community for three years. A version of this piece first appeared in the Indypendent.

Related
Bay Area Transit Workers and Riders Demand to Unlock $1.7 Billion Already Earmarked for Jobs and Bus Service »
TV Review: The Class Struggle at Superstore »
Inside the Alabama Amazon Union Drive: An Interview with the Lead Organizer »
The Grocery Companies Denied Us Hazard Pay—So We Went Over Their Heads »
If the PRO Act Were Law, The Amazon Union Election Would Have Looked Very Different »

Overtime pay rates can cause workers to work longer hours than they would at a flat hourly rate. But, there are many violations some workers have to endure and among the worst are wage and hour offenses. Such offenses, which contain unpaid overtime and miscalculation of hours, cost people cash they are owed for hours they worked. The amount of offenses apparently has grown, as the number of lawsuits against corporations to recover such wages is growing at an alarming pace.

The community-labor alliance turned out to really important in organizing a neighborhood grocery here in Oakland CA. UFCW didn't first build an alliance when they tried to organize an expanded neighborhood grocery and the campaign failed big-time. The grocery was able to position itself as the underdog--local people trying to provide better food at lower prices to a gentrifying neighborhood vs. big pushy union not from the neighborhood raising costs so high the business will fail. And so on and so on.