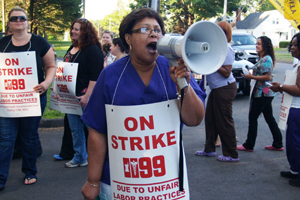 About 700 members walked out July 3 after HealthBridge Management, which had already prompted a three-month lockout at one of the nursing homes last winter, imposed a contract that attacked everything from pension funds to employees’ rights to organize.

The company’s position has barely changed since negotiations began in March 2011, according to SEIU 1199NE spokeswoman Deborah Chernoff.

“Pretty much every right and benefit and economic gain people have struggled for over the last 30 years, they’ve eliminated,” Chernoff said, adding that the imposed deal altered 38 of the 39 articles of the previous contract.

Those alterations include eliminating staffing ratios, requiring workers to pay health insurance premiums for the first time, cutting sick days by half, preventing delegates from hearing grievances during work hours, and switching from an employer-funded pension to a 401k.

HealthBridge said the workers' contract was “realistic in the current health care environment.”

Chernoff said the company told “us directly in negotiations that their goal is to have union and non-union workers working under the same conditions.”

“They want to take back everything,” said striker Barbara McFadden, who has worked as a certified nursing assistant for 10 years at the West River Health Care Center in Milford,
Connecticut. “We had no choice; they made us go on strike.”

The National Labor Relations Board issued a complaint against HealthBridge on July 6, saying the company has committed unfair labor practices, having “failed and refused to bargain in good faith."

The NLRB ordered the company both to pull its imposed contract and to reimburse its employees for the wages and benefits lost due to its implementation.

The Labor Board set a trial date of September 10, and Chernoff said it was likely the strike could last at least until then.

Chernoff said if the owners “choose to ignore the law and exploit the length and intricacies of the appeals process, we are expecting and preparing for this to be a very long struggle.”

Because members were willing to work without a contract, they will be eligible for unemployment under Connecticut law. The union organized sessions to explain requirements.

The latest complaint is the fifth the NLRB has issued against HealthBridge.

The fourth was issued after the company locked out the workers at West River between December and April in an attempt to coerce them into accepting its proposal. In addition, the NLRB had to order CareOne, a sister company of HealthBridge, to bargain in good faith after a New Jersey nursing home voted for SEIU 1199 representation. The company had fired or disciplined 10 union supporters and refused to bargain.

Patients and their family members have voiced support for the Connecticut workers, saying they are an important, supportive presence in residents’ lives. They worry that the scabs replacing them are not as invested.

“I am concerned about the discontinuity in my father's care,” wrote Peter Piazza, whose father is at West River, in letter to the editor of the CT Post. “I am disappointed that workers were left with no other options.”

Malloy pointed out that SEIU 1199 has settled contracts with dozens of other Connecticut nursing homes during the 15 months it has been negotiating with HealthBridge.

“In this economic climate there’s more of an appetite,” Chernoff said, “to think that people are so terrified about losing their jobs that they’ll accept anything.”

But SEIU 1199 prepared members to stand strong. More than 100 members have attended negotiations, where they saw firsthand what the company was trying to impose.

“This is a group with long average service—more than 12 years—because over time we have been able to turn these into decent jobs,” Chernoff said. “So many remember what it was like pre-union and they don’t want to go back.”

Meanwhile, workers are learning that they can’t trust the company to obey the law on the picket line, either.

McFadden, who is a strike captain at the West River picket, said that the workers were having lots of trouble with the new security hired for the strike.

“They are ruthless,” she said.

According to McFadden, workers have the right to picket for a minute and a half while scabs drive onto the facility. But the security guards will not let them do even that, and are pushing picketers into the street.

Now strikers are recording the actions of the security guards and using the footage to argue for their rights.

“They’re not going to intimidate us,” she said.

Olivia Rosane is a member of United Auto Workers Local 2179 in New York.

Related
Southern Service Workers Launch a New Union »
Strike Wave Rocks Britain, as Unions Confront the Cost-of-Living Crisis »
‘No Contract, No Matisse’: Philadelphia Museum of Art Workers Win First Contract After Strike »
The Right to Strike Is at Stake on the Railroads »
How Intermodal Yard Workers Doubled Their Pay »

My point was the union movement isn't doing itself any favors with the addiction to hyperbole and emotionalism. The public isn't buying. But the response to my comment raises an even larger point.

Unionists insist on division -- us and them -- us and the boss -- which side are you on. You'd be surprised the large percentage of Americans who don't recognize some fundamental difference between people who write paychecks and the people who cash them. I'm not your boss -- was that supposed to be an insulted?

To most of us there are no black and white hats here -- there are Americans -- all 100% of them -- essentially stuck in the same economic boat, our shared fate tied to the same shriveling American dollar. None of us are perfect and most of us, bosses included, are decent folks doing the best we can.

You want a better higher paying job and for some reason you feel this particular employer is somehow responsible for providing you with one, I assume because finding that better job somewhere else is not an option for you. So you try to better your circumstances with a union. Good for you, your right, your choice. Point is as long as unions insist on demonizing, damaging and even eventually destroying the employer you are digging yourselves a hole in quicksand.

You, and people like you, make employers want to take work overseas. You cause employers to hesitate to expand and hire. You drive them to Right to Work states. Your strikes, your inflexibility, your demands cause companies to spend billions just on trying to avoid you, money that could have gone to employees.

You can't bully employers like you used to be able to. If you don't start working TOGETHER with employers (and yes, you can, really, no matter how mean and evil they are) unions are dead already.

Two obvious points from your comment: (1) You clearly have no idea what it takes for working people to win and keep their benefits; (2) Healthbridge monitors what is written in this magazine. I hope at least you pay the subscription fee!

According to the article the employer wants to take back "everything" the union has fought for the past 30 years. So can we assume this is all SEIU was able to get for these workers during that time? No healthcare copay, a pension plan, some sick days and permission for stewards to handle grievances on company time? Sounds like a fairly lousy deal for thirty years of paying dues!

Meanwhile, if the union is so worried about "continuity of care" maybe they shouldn't have pulled their members out on strike. Duh.