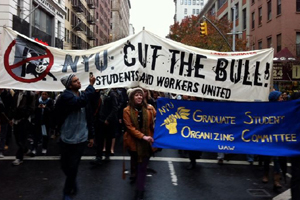 Students or workers? As grad employees wait for the NLRB to consider allowing them to unionize, some aren’t waiting for the legal right to bargain to start acting like a union. On several campuses—including NYU—they’ve spent years organizing. Photo: GSOC-UAW.

Students or workers? Looking to reverse an infamous 2004 ruling of the Bush-appointed National Labor Relations Board, the NLRB announced in June it will revisit collective bargaining rights for graduate employees at private universities.

Pro- and anti-union parties submitted briefs July 23, with the American Council on Education (“representing the interests of more than 1,600 campus executives”) weighing in against bargaining rights and the Auto Workers (UAW), the AFL-CIO, the Teachers union, and the University Professors on the other side.

The decision could open up a wave of new organizing on campus, but whichever way the board decides, some graduate employees aren’t waiting for the legal right to bargain to start acting like a union. On several campuses, they’ve spent years organizing and have won gains.

The Bush board had opined 3-2 that grad employees are primarily students and have no bargaining rights. Today’s board, now controlled by a Democratic majority, voted 3-1 to consider a union petition filed by graduate workers at New York University and NYU Polytechnic.

At the time of the 2004 decision, NYU was the only private university with a contract—and soon scotched it. Several other organizing drives were halted when the ruling hit.

The board’s apparent desire to reverse the old ruling comes after years of pressure from organized graduate employees. Working with the AFL-CIO, they launched letter-writing campaigns, circulated petitions, organized rallies, and attracted thousands of supporters.

Organizers took the fight to the NLRB’s front steps in February, when 50 NYU grad students traveled to Washington, D.C., to demand a decision on their bid for an election. They had already been waiting two years.

The D.C. rally followed a December action by University of Chicago students and supporters at the board’s Illinois office. The national campaign Graduate Labor Counts, launched by the Chicago group, gathered almost 3,000 signatures for graduate employees' right to organize.

“I think that our organizing played a role in the reconsideration,” said Matt Canfield, of the Graduate Students Organizing Committee at NYU. “It was the constant pressure that grad students put on.”

Board rulings on graduate employees have flip-flopped with the party in power. The Bush board’s 2004 ruling tossed out a petition for a union by Brown University grad employees and took the opportunity to strip away bargaining rights for grad employees at private universities. That ruling flew in the face of a 2000 Clinton-era decision in support of NYU's union, GSOC.

Two years after the 2000 decision, GSOC signed the first graduate worker contract at a private university. The union, part of the UAW, won big improvements in working conditions, health insurance, and sick leave, as well as a 40 percent wage increase.

But when GSOC’s contract expired in 2005, NYU used the Brown decision to refuse to bargain another contract. The union fought back, but after a six-month strike and a relentless union-busting campaign, lost its contract.

Even without recognition, GSOC lived on. In April 2010, the union publicly announced support once again among a majority of teaching assistants and research assistants, and soon after petitioned the NLRB for a new election. They were joined by 600 graduate employees at NYU Polytechnic, a science and engineering institute that merged with NYU in 2008.

The NYU students hoped a new NLRB decision would come quickly, but more than two years have passed, in part due to attacks from Senate Republicans aimed at gumming up operations at the board. Now that the NLRB has moved to take up their case, the clock is ticking toward the presidential election, which could shake up the board’s membership once again.

NYU grad employees note that having Democrats in power doesn’t assure favorable treatment for unions, pointing to Jacob Lew, recently appointed chief of staff for the Obama White House. Lew worked for the NYU administration during GSOC’s strike and played a key role in busting their union.

“We imagine universities are spaces of progressive politics and building the types of communities we want to see in the world,” Canfield said. “But universities are surprisingly formidable opponents of organizing graduate workers.”

Andrew Yale, an organizer with the University of Chicago’s Graduate Students United (GSU), says such unions are a counter-force to “the corporate university.” “Graduate student organizing has developed alongside the increasing marketization of higher education,” he said, “and as we move towards ideas like ‘charter universities,’ we are seeing a business-minded attitude towards higher education.”

In such an atmosphere, he says, graduate employee unions can defend academic freedom and insert themselves into decision-making through collective bargaining. Canfield notes that the fight for grad workers is particularly important at a time when many private universities have their sights set on expansion.

The Brown decision created a disconnect with public universities, which are subject to state labor laws, not the decisions of the NLRB, and have more than 30 recognized graduate employee unions.

But if the NLRB comes down on the union’s side, “this would also help us at public universities,” says Jim McAsey, organizer for the grad union at the University of Michigan. “It would bring people into the movement, and there is strength in numbers. Whenever there is an organizing drive, everyone watches.”

U of M union members are facing their own battle with Michigan legislators, who passed a law erasing collective bargaining rights for research assistants, arguing that RAs at state universities are not real state employees. “I hope that if the NLRB overturns the Brown decision it will finally put that asinine argument to bed,” McAsey said.

“Graduate students provide a service in exchange for a wage, which is the literal definition of an employee,” Yale said. “Like any other worker, we should have the right to collectively bargain.”

Critics charge that the Brown decision denied rights to workers at universities increasingly reliant on the labor of graduate employees, as well as adjunct faculty. “NYU and other universities are absolutely dependent on graduate workers,” Canfield said.

Nationwide, between 50 and 70 percent of teaching at universities is done by graduate students or contingent faculty, according to a report by the Coalition of Graduate Employee Unions. As universities lean on graduate labor, the number of tenure-track professors is plummeting: in 1975, 57 percent of college instructors were tenured. By 2007, that number had fallen to just 31 percent.

University of Chicago workers in GSU will jump into action if the board goes their way. GSU, founded in 2007, has never been formally recognized yet has organized around health insurance, women's access to health care, equitable pay, and access to childcare. An affiliate of the Teachers union and the University Professors, GSU has won 100 percent raises for teaching assistants and put on a successful campaign to reduce wait times for gynecologist appointments.

While Yale expects the NLRB decision to be pro-union, he insists that, whatever the outcome, GSU will continue organizing. “As usually happens with labor law, we can't rely on it to advance labor rights,” he says.

Sarah Lazare belongs to the solidarity committee for the graduate employees union at the University of Illinois at Urbana-Champaign.

Related
After Strike, Workers Resoundingly Reject Contract at Volvo's Virginia Truck Plant »
If the PRO Act Were Law, The Amazon Union Election Would Have Looked Very Different »
Viewpoint: Who Invited Them? Employers Like Amazon Should Have No Say in How Workers Organize »
Goodbye and Good Riddance: Biden Fires Labor Board’s Peter Robb »
Opening the Door to a More Democratic UAW »