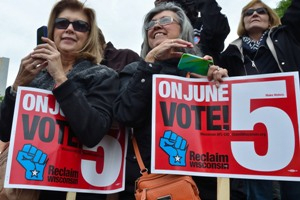 Tomorrow’s Wisconsin recall election will be a replay of November 2010—Scott Walker vs. Tom Barrett. If the million voters who signed recall petitions, plus another half million, come out and vote for Barrett, Walker will be toast. Photo: Sue Ruggles.

If the million voters who signed recall petitions, plus another half million, come out and vote for Barrett, Walker will be toast.

If they don’t, the nightmare will continue. One GOP assemblyman told a town hall meeting that three pieces of right-to-work legislation are ready to be tossed into the legislative hopper. And, despite claiming no interest in right to work, Walker himself supported such legislation when he was in the Assembly. He was recorded not long after he was elected telling a billionaire benefactor that he would be pursuing right to work via a “divide and conquer” strategy that involved attacking the public sector first.

As voters go to the polls, the state’s economy should be foremost in their calculations. In the year after Walker signed his union-busting bill in March 2011, Wisconsin lost the most jobs of any state. This is from a guy who promised 250,000 new jobs during his first term.

But Barrett still faces a steep uphill climb. The most recent polls indicate the race is a toss-up, with a slight edge for Walker.

Add to that an array of “independent expenditures” on behalf of Walker. This writer, for example, received an over-sized, pro-Walker postcard from the National Federation of Independent Business. The return address was Nashville, Tennessee. Wisconsin Manufacturers and Commerce has dumped hundreds of thousands of dollars into TV ads.

But money likely won’t buy this election. Virtually every poll shows only 2-3 percent undecided—and recently, that group is leaning toward Barrett. Turnout will be crucial. Barrett is hurt by the fact that many college students have left for the summer. Election officials are predicting a 60-65 percent turnout, greater than in November 2010.

Walker supporters were motivated enough to come out for the Republican primary although he had only token opposition. Walker generated 626,500 votes, while the hotly contested Democratic primary drew only 665,000 votes, far fewer than the number who signed recall petitions.

Who are the Walker supporters? He has been successful in convincing a lot of people that public employees are the problem. He is running again this year against the cities, Madison and Milwaukee.

Although he has attacked the rights of women, workers, and voters, as well as cutting education and health care funding, he is counting on those who think they haven’t been affected—or simply aren’t paying attention.

Meanwhile, the Barrett campaign is emphasizing in its TV ads the investigation into illegalities committed by Walker staffers when he was Milwaukee county executive.

Three former aides, an appointee, and a major donor have been charged with doing campaign work on county time, illegal contributions, and stealing $11,000 in donations intended for an event to honor veterans. Thirteen others, including Walker’s former spokesperson, have been granted immunity in exchange for testimony.

Walker has created a legal defense fund for himself, which state law allows only if an officeholder has been charged with a crime or is being investigated for one, and he has transferred $160,000 from his campaign fund into this defense fund.

Yet polls show that the state is so divided that Walker supporters write all this off as simply “politics.”

The winner of the Democratic primary for lieutenant governor was Madison firefighter Mahlon Mitchell, who also serves as president of the statewide firefighters’ union. Mitchell is African-American, and if Wisconsin’s frequently nonpolitical African-Americans turn out for Mitchell the way they did for Barack Obama, that could well make the difference on Election Day.

Barrett swamped his closest rival, Kathleen Falk, in the May 8 Democratic primary 58 to 34 percent. Falk had the endorsement of all the large public sector unions (and $4 million for TV ads) and also the state AFL-CIO. She had some environmental groups and Emily’s List, too.

The unions supported Falk because she took a more aggressive position against Walker’s union-busting bill, pledging to veto any budget that did not restore public sector bargaining rights.

Falk’s opponents tarred her as a tool of the unions. Some said her pledge went too far—jeopardizing the entire state budget because of one issue.

But clearly, the Democratic electorate saw Barrett as the best chance to beat Scott Walker, and for almost everyone voting, beating Walker was the ultimate concern.

All the polls had indicated that a race between Barrett and Walker would be neck and neck, but Walker held a bigger lead over Falk.

One Madison legislator going to door to door noted: "Of the hundreds of doors I've done, everybody I talked to loved Kathleen. But they just thought Barrett had the better chance of beating Walker."

Union leaders were not happy with Barrett—though merely 18 months ago they had campaigned hard for him. But members and the general public did not view him as anti-union, and all the Democratic candidates, to their credit, refused to go negative during the primary.

Several politically active unions tried to convince Barrett not to enter the race. Some felt his plan for how to undo the Walker union-busting—call a special session of the legislature—was pretty weak, given the strong Republican majority in the Assembly.

Some were still smarting from what they thought was Barrett’s lackadaisical campaign against Walker in 2010. Teacher unions didn’t like his support for a mayoral takeover of the Milwaukee public schools.

Other Milwaukee public sector unions harbored ill will because of tough negotiations with his administration. Building trades unions felt he was trying to weaken application of Milwaukee’s prevailing wage ordinance.

But when Barrett won, union support shifted to him overnight. Union leaders said “anybody’s better than Walker” and pointed to Barrett’s record during his 10 years in Congress (95 percent on the AFL-CIO roll call; votes against NAFTA, the Patriot Act, Bush’s wars, and deregulation of the banking industry).

Barrett has promised to restore education funding and undo other damage done by Walker. And, perhaps most important to organized labor, he told a Madison TV station “…to me the most important goal is making sure that working people in this state have the right to collectively bargain and to collectively organize.”

Barrett’s message was that he was the guy who could bring people together. In other words, he was not in the pockets of unions (or anyone else), and he was not divisive like Walker. He has always portrayed himself as a “nice guy” and most people view him as such.

Historically, politics in Wisconsin have been hard to predict. This state gave the country progressive Senators Bob La Follette and Russ Feingold, but it also produced Joe McCarthy and replaced Feingold in 2010 with a nonentity Tea Partier.

Anything could happen tomorrow, but it’s likely that the winning side will be the one that works hardest at turnout.

Jim Cavanaugh is former president of the South Central Federation of Labor.

Related
New Jersey Welfare Workers Sound the Alarm on Safety »
New York City Retirees Fight to Defend Their Medicare Benefits »
How We Turned Bargaining Around at Law360 »
Virginia Public Sector Workers Are Organizing to Make Their New Bargaining Rights a Reality »
Will the Stimulus Stop States From Slashing More Jobs? »