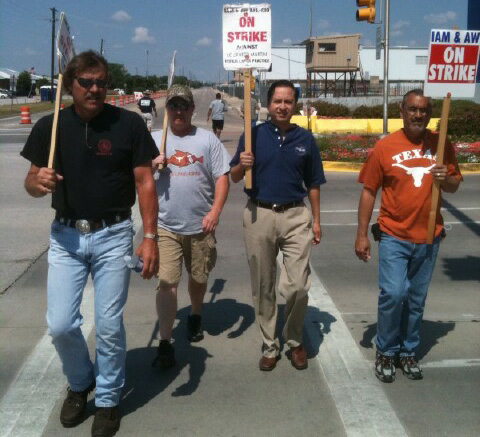 Lockheed Martin aircraft workers in Ft. Worth, Texas, have been striking over health care and new-hires' pensions since April 23. “If we can’t stand up for the people who aren’t here yet, what good are we as a union?” asked one striker. Photo: Machinists.

Lockheed Martin is one of the largest government contractors in the country, with more than $17 billion in contracts annually. The defense corporation has seen fit to distribute nearly $20 million annually to politicians in Washington, and to pay its CEO nearly $150 million in the last five years.

It can’t, however, seem to find the money to pay for new hires' pensions or to maintain comprehensive health coverage at its F-35 jet plant in Fort Worth, Texas, and two flight testing centers in California and Maryland.

With negotiations at an impasse and an unacceptable final offer from management on the table, 3,650 members of Machinists District 776 walked off the job April 23. More than three weeks later, the strike is still going strong.

James Little, an aircraft assembler who’s been with Lockheed for ten years, says the pension and health care that they currently have are hard-won after years of struggle. “We’re out here walking the line trying to keep what our forefathers fought for,” Little said. “It’s not about the money, it’s about health care and retirement. We just want to keep what we have.”

Lockheed’s proposal would eliminate defined-benefit pensions for new hires, and would move all employees onto the new company health care plan, LM Healthworks, which would dramatically increase premiums and co-pays for both new hires and current employees.

In the media, Lockheed has played up that the contract offers an annual 3 percent raise and a $3,000 signing bonus.

But the strikers realize that Lockheed’s proposal is a bad deal in the end. “Their proposal gives to one pocket and then takes from the other,” said Richard Riley, a mechanic who has been at Lockheed for 32 years. “When I came on we were on a plan that made us pay 20 percent of our health care expenses, and after my first child was born, it took us years to pay off.”

The union had fought and won comprehensive health care coverage over the years, but now Lockheed is trying to take it away. “When I encountered LM Healthworks, I realized that there wasn’t anything I could live with,” said Riley. Of Lockheed’s proposal to eliminate defined-benefit pensions for new hires, he said, “If we can’t stand up for the people who aren’t here yet, what good are we as a union?”

Rob Wood, a spokesman for District 776, pointed out that the elimination of pensions for new hires is always the first step towards eliminating pensions altogether.

“The company’s proposal is taking away the pension on an installment plan, Wood said. “Three years down the road, they want to freeze the pension, and the new people don’t have a pension so they won’t fight to keep it. Once they’ve frozen the pension plan, they can sell it off to insurance companies like AIG. Then it’s between you and the insurance company. If the insurance company goes belly-up like AIG did, you could end up with nothing.” The average age in the plant is 53.

Lockheed has continued its intransigence three weeks into the strike, refusing any changes to its final offer. But morale on the picket line is high, according to Riley. “The younger members have really taken a lead. We’re stronger today than we were the day we walked out. We’ve had unbelievable the levels of support,” he said.

Other unions in the area have brought food and drinks to the picket lines, and other Machinists lodges around the country are sending donations.

Related
No One Else Was Going To, So These Teamsters Saved Their Own Pensions »
Leveraging Strategic Position, Argentine Vegetable Oil Workers Win Big Raises with Coordinated Strike »
Ohio Auto Parts Workers Strike to Unionize »
Swarming Solidarity: How Contract Negotiations in 2021 Could Be Flashpoints in the U.S. Class Struggle »
Cleveland Heights Teachers Strike in the Snow, Beating Austerity with Solidarity »