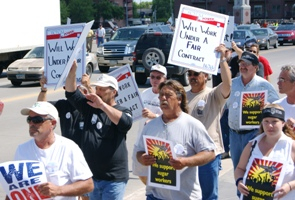 A march and rally in solidarity with locked out sugar beet workers August 11 drew over 600 people. Photo: Minnesota AFL-CIO.

Locked-out sugar beet workers, their families, and supporters turned out in big numbers August 11 to say they want to work—but not on the terms offered by American Crystal Sugar.

ACS locked out more than 1,300 members of the Bakery, Confectionery, Tobacco & Grain Millers August 1, two days after they rejected deep concessions by 97 percent.

Workers rallied at ACS headquarters in Moorhead, Minnesota, and then marched to the bridge leading to Fargo, North Dakota, where they were greeted with honks of support from drivers. The workers are banned from seven facilities in Minnesota, North Dakota, and Iowa.

American Crystal Sugar, the largest producer of beet sugar in the U.S., has contracted scabs through a Twin Cities company called Strom Engineering.

“The union had been negotiating since May with fair and modest proposals for the company to consider,” said Mark Froemke, an AFL-CIO staffer coordinating solidarity. He’s a former worker at the East Grands Forks beet plant.

“We kept hearing from management’s spokesperson, ‘either a deal before August 1, or you will be on the outside dealing with this.’” ACS wants to outsource jobs and shift health care costs onto workers.

A worker speaking at the rally said his daughter had a near-fatal accident. Only with help from the community and their current insurance did the family barely make it. With the new insurance proposed by ACS, he said, his daughter would have died. The applause was rousing as she stood from her wheelchair.

“Sugar is at a record price and the company’s profitability is directly related to the skill and hard work of the unionized workforce,” she added. “We sacrifice weekends and holidays and this lockout should be seen as a black eye for all sugar workers in the region.”

The sugar processing facilities are owed by a growers’ cooperative and managed by ACS. Tony St. Michael, a bargaining committee member, said the union was reaching out to farmers in the co-op to put pressure on management.

The locked-out employees are receiving unemployment benefits but resoundingly want to work. St. Michael noted that CEO Dave Berg’s salary has doubled to $2 million since 2008.

“Their cuts to 1,300 workers and families equal this one guy’s pay,” he said. “This is not right and we are going to keep on fighting until they step away.”

At the rally, a Steelworkers local in North Dakota presented a check for $5,000. Shar Knutson, president of the Minnesota AFL-CIO, asked supporters to call Berg at ACS headquarters (218-236-4400).
Eliot Seide, director of AFSCME Council 5, said, “We will be here with you until the greedy bastards give you the contract you deserve,” bringing the crowd to its feet.

Harvest time is just around the corner in September. Worker resolve is strong, and talk of sticking to it for the long haul echoed through the park.

Related
Workers at Hooters-Style Restaurant Strike, Protesting Racist Sexist Manager »
Strike Wave Rocks Britain, as Unions Confront the Cost-of-Living Crisis »
‘No Contract, No Matisse’: Philadelphia Museum of Art Workers Win First Contract After Strike »
The Right to Strike Is at Stake on the Railroads »
After Strike Threat, Wisconsin Nurses Get a Possible Path to Union Recognition »

Before the Europeans settled much of this country there were longstanding traditions among many of the native tribes in North America.  One of these traditions, called the potlatch, was adopted and modified by many of the Christian Churches in the Midwest--they call it a potluck dinner.  At a potluck dinner everyone brings their favorite dish that they can afford to share with the community in a get together, so that everyone can get a taste of the best the community has to offer.  Recipes and cooking secrets are often shared, so that the next generation will be able to carryon many of the traditional foods from the past.  The original potlatches, however, were usually called by the most successful hunters and gatherers among the tribes, and those who less fortunate in the community came only with open arms so they could take home what was needed to keep their family whole for the period that the food could be preserved.

A rich man in the tribe was the one who had gathered great amounts of respect and gratitude from his neighbors because of his success and ability to share his bounty.  Essentially the potlatch was a voluntary estate tax paid by the living people who had accumulated more than what they could use in their immediate family.  My how times have changed in the Red River Valley.  I have family that still live in that area and many of them have been beet farmers and sugar workers over many years.  I know that most of their families attend the same Churches and their children and grandchildren attend the same schools.  The management workers of the company do likewise with their families.  It will be interesting to see what happens to these families as the children return to school and Sunday schools this fall when the adults in the community can't seem to agree on which families will have food on the table this winter.

I am not sure of all the facts, but this is what I have gathered from public records and news reports.  Domestic sugar is considered a critical commodity, so the federal government severely limits sugar imports to only the amount needed to keep the price of sugar sufficiently high to support ample domestic supplies available to consumers.  In recent years area farmers have been able to earn an average of about $1200.00/acre with their beet production payments.  This amount is about 3-5 times as much as they can earn on traditional small grains with the same land.  This amount is also about ten times the amount paid to the entire locked-out labor force in wages and benefits for all of the processing cf their product into salable sugar and other byproducts. Each locked-out union member on average processes about 400 acres worth of beets into sugar.  They do this buy working rotating shifts That have them working seven nights four to midnight, seven nights midnight to eight and seven days of eight to four out of each four week period from mid august until the end of May.  They work three out of four Labor Days, Thanksgivings, Christmas, New Year's Days and Easters.  sometimes they are still doing the shutdowns on Memorial Day, so the only holiday they as sure to have off is theFourth of July.  During the beet processing season, they are not allowed to take a day of vacation, so those union workers miss three out of four school activities with their children.