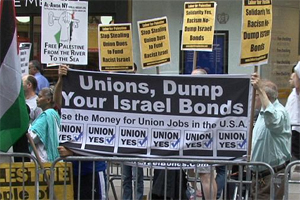 Hosted by the State of Israel Bonds, the dinner awarded a “Peace Medal” to Hughes. The bonds are an investment representing loans to Israel’s government.

The picket, called by the Labor for Palestine network, followed a call from a new Palestinian union coalition that asked labor bodies around the world to divest from Israeli bonds and end “collusion with decades of violations of international law and human rights by Israel.”

The picketers, members of several unions and other groups, are part of a growing movement for boycott, divestment, and sanctions against Israel.

The campaign has been endorsed by labor bodies around the world, including the trade union congresses of South Africa, Brazil, Ireland, Scotland and the UK, and labor bodies in Australia, France, Canada, Norway, Italy, Spain and Turkey.

But for decades, U.S. labor officials have invested unknown billions from union retirement funds in the bonds.

They point to similarities between Israel’s occupation of Palestine and the former South African system: In Israel, Arab citizens face legalized segregation in housing and employment.

At least 70 percent of 10 million Palestinians remain refugees, who Israel vows cannot return after being expelled from the country in 1947-48.

In the occupied West Bank, separate and unequal conditions are even more overt. Hundreds of thousands of Israelis live in growing settlements connected by “Israeli-only” roads. Palestinians are left in disconnected towns, stalled at hundreds of military checkpoints, and hemmed in by an Israeli-built wall that grabs more land.

“Israel bonds are one of the ways Israel pays for its Jewish-superiority system, its wall around Palestinian areas, its Jewish-only roads,” said Stan Heller, a high school teacher who has campaigned for the Connecticut AFL-CIO to divest from the bonds.

The June protest built on earlier efforts to end complicity in occupation, including refusals to handle Israeli cargo by dockers from South Africa to Oakland. The Oakland port union’s action April 4 in solidarity with workers under attack worldwide earned them a lawsuit from port bosses accusing the union of violating the “no strike” clause and seeking unspecified damages.

Picketers in New York argued that union members’ funds should be transparently invested in justice for all workers.

However, AFL-CIO President Rich Trumka has spoken against international efforts to boycott Israel, suggesting that “bashing Israel” was anti-Semitism in disguise.

The June 13 dinner was chaired by Stuart Appelbaum, president of the Retail, Wholesale and Department Store Union and head of the Jewish Labor Committee. Appelbaum has repeatedly attacked international union support for boycott, divestment, and sanctions against Israel.

Protesters called on Hughes and Appelbaum to “stop scabbing for apartheid.”

Michael Letwin is former president of the Association of Legal Aid Attorneys/UAW Local 2325. He is a founding member of Labor for Palestine and New York City Labor Against the War.